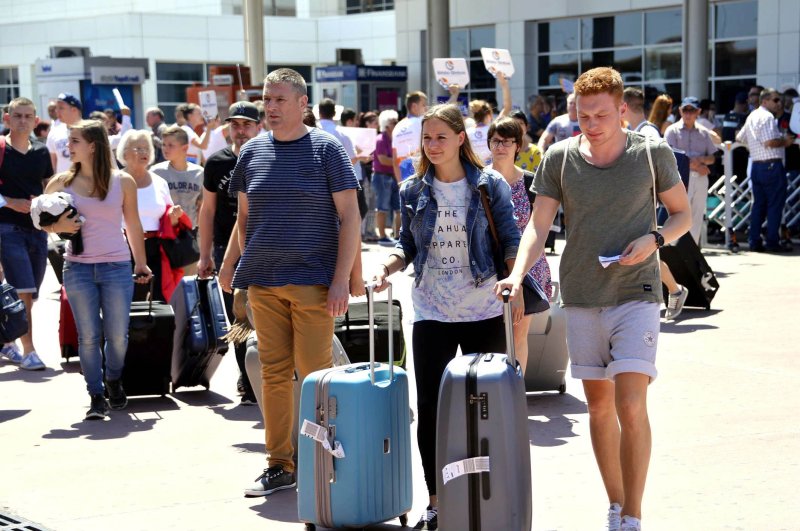 In this undated file photo, tourists are seen arriving in the Mediterranean resort city of Antalya, a favorite spot for Russian tourists. (DHA Photo)
by DAILY SABAH Mar 01, 2020 3:21 pm
RECOMMENDED

Turkey remains a top tourism destination for Russian travelers despite the recent developments in northeastern Syria, where Turkish forces launched a military operation against the Russian-backed Bashar Assad regime, according to Russia’s Alliance of Travel Agencies (ATA).

The executive director said the tour package sales have been high through mid-February but experienced a minor decline for March, which Osipova attributed to the recent coronavirus outbreak.

Russia is an important resource market for the tourism sector in Turkey with arrivals increasing gradually each year even during the winter months.

Russian citizens topped the list and accounted for 15.6% of all arrivals in Turkey in 2019, according to figures from the Culture and Tourism Ministry. Some 7 million Russians visited Turkey last year, the data showed. Their top travel destination was Turkey’s western Mediterranean coastline, Antalya.

They accounted for 7.3%, or over 130,600, of all foreign tourists who came in January of this year, but their high travel season doesn't start until May, Osipova said.

Russian tourists currently do not consider the political situation in Turkey as an obstacle to their travel plans and added that the association will continue to follow developments closely, she said.

The governor of Antalya, Münir Karaloğlu, said last week that talks were underway between Moscow and Ankara to enable Russian tourists visiting Turkish cities to use Russian currency.

Turkey and Russia have been at odds over Moscow’s military involvement in Syria’s Idlib, where tensions rose significantly after the killing of 34 Turkish soldiers in a brutal attack by the Moscow-backed Bashar Assad regime on Thursday night.

Earlier this month, Turkey condemned Russia's policy of seeking to take control of the territory around Idlib, taking little consideration of the lives of local residents, adding that Ankara was determined not to roll back on the Sochi deal and would take the necessary steps to end the Assad regime’s aggression.