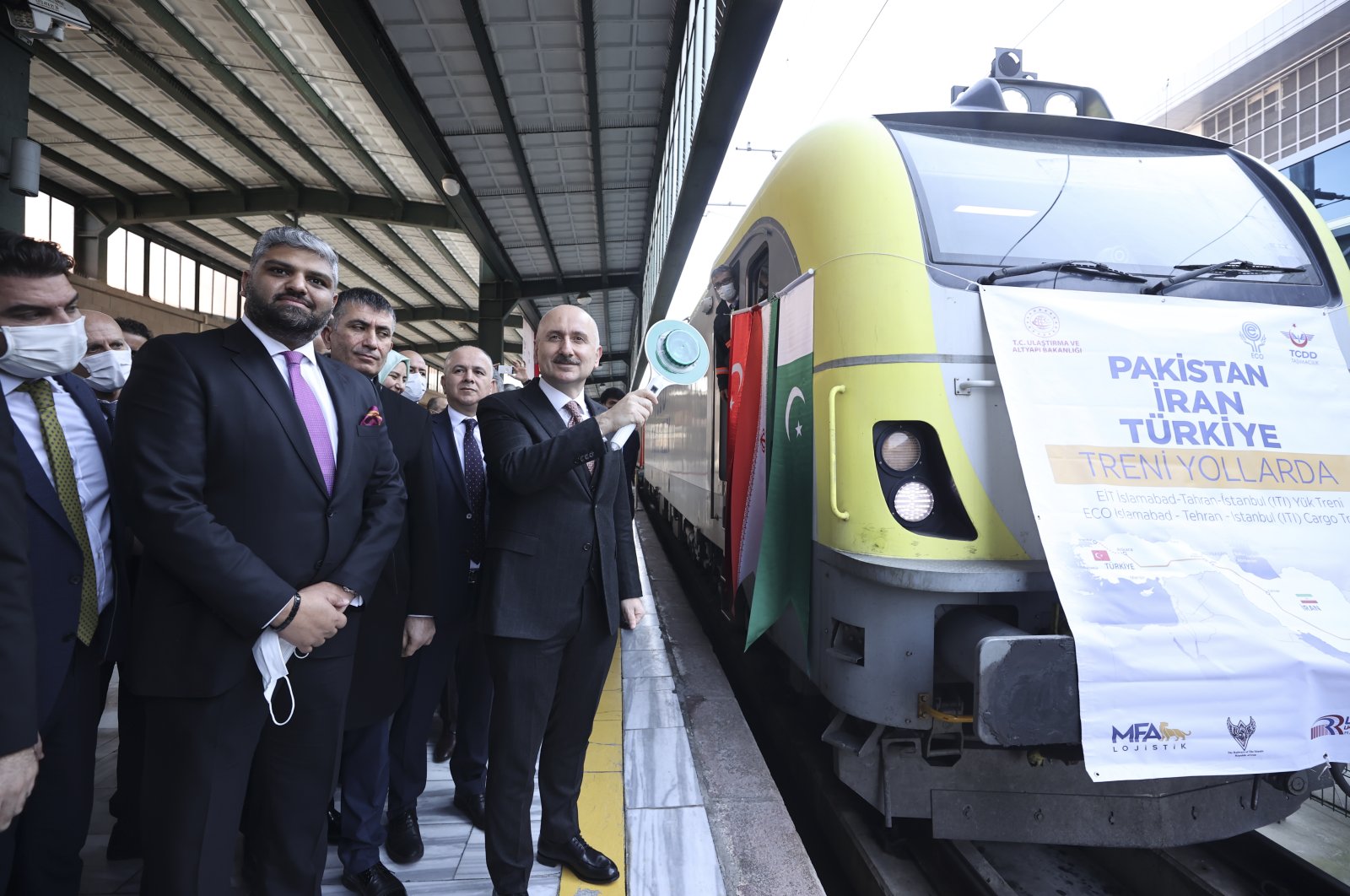 Resuming operations after 10 years, the first Islamabad-Tehran-Istanbul (ITI) train carrying goods from Pakistan to Turkey via Iran rolled into the capital Ankara on Wednesday.

The ITI cargo train started its journey from Islamabad on Dec. 21, 2021, and arrived in Ankara in around 13 days. Turkey's Transport and Infrastructure Minister Adil Karaismailoğlu, Pakistani parliamentarian Makhdoom Zain Hussain Qureshi and Iranian Ambassador to Turkey Mohammad Farazmand attended a ceremony held to mark the arrival of the train.

Departing from the Margalla station in Islamabad, the train embarked on its 5,981-kilometer (3,666-mile) route, arriving in 12 days and 21 hours. The cargo train aims to boost trade between Pakistan, Iran and Turkey. The train itself is comprised of eight loaded wagons, 20 feet (6 meters) in length, each with a capacity of 22 tons.

Karaismailoğlu in his speech said the new railway will offer another option to industrialists and businesspeople on the Pakistan-Iran-Turkey route.

"It will save time and cost compared to sea transportation between Pakistan and Turkey, which takes 35 days, and will lead to the development of trade between the two countries," he said.

"Thus, with the Islamabad-Tehran-Istanbul train, a new railway corridor will be provided to our exporters in the south of Asia – which has the highest population density globally – reaching Pakistan, neighboring India, China, Afghanistan and Iran. In this way, our country will be one step closer to its goals of becoming a bridge and logistics base between Asia and Europe," Karaismailoğlu added.

Speaking at the ceremony, Qureshi highlighted that the ITI train would play an important role in enhancing regional connectivity and promoting economic and commercial activities in the ECO (Economic Cooperation Organization) region. Iran, Pakistan and Turkey established the Regional Cooperation for Development organization in 1964, renaming it the ECO in 1985.

Qureshi added that the train would offer Pakistan an opportunity to further increase its exports and strengthen its connectivity with international markets, including in Europe.

"The current government in Pakistan believes in regional connectivity and we feel that to play a role at the national stage we need to be economically reliable. In order to do that, we need to not only have peace in our region but also increase the trade within our neighborhood and this ITI project will become a friendship project.

"We get access to the European markets and Turkey gets access to the central Asian states so it is a mutually beneficial arrangement and I hope it will be sustainable and we can grow from it further," Qureshi told Anadolu Agency (AA) in an interview.

Ambassador Farazmand in his speech explained that the ITI railway project was first launched in 2009 under the ECO but remained suspended due to technical issues, restarting a decade later.

He emphasized that the three countries also plan to launch a passenger train along the same route in the near future.

The first train from Islamabad to Istanbul was inaugurated on Aug. 14, 2009. Since then, eight trains have been dispatched from Pakistan to Turkey. The country has also dispatched six trains to Pakistan, but the train service was discontinued due to floods in the South Asian nation in 2009.