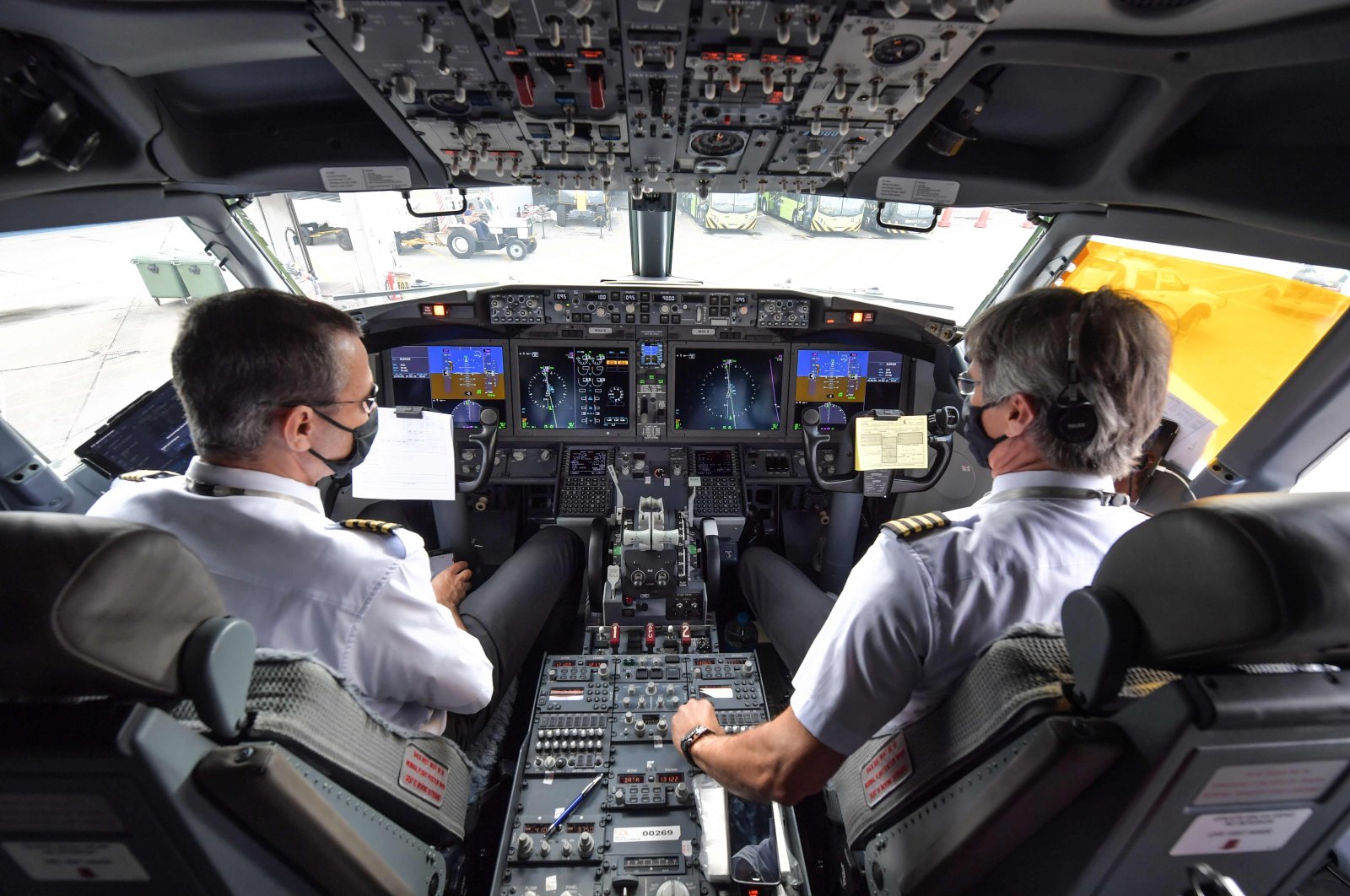 Pilots are pictured in the cockpit of a Boeing 737 Max aircraft operated by low-cost airline Gol as it sits on the tarmac before takeoff at Guarulhos International Airport, near Sao Paulo, Brazil, Dec. 9, 2020. (AFP Photo)
by REUTERS Dec 17, 2020 1:36 pm
RECOMMENDED

Boeing Co. is hiring up to 160 pilots to be embedded at airlines in its latest bid to ensure its 737 Max has a smooth comeback after a 20-month safety ban, according to a recruitment document seen by Reuters and people familiar with the move.

The new "Global Engagement Pilots" will act as instructors or cockpit observers on 35-day assignments at an equivalent annual salary that could reach $200,000, for a total potential cost of $32 million, one of the people said.

The unusual hiring spree is part of a Boeing campaign to protect the relaunch of its redesigned 737 Max from operational glitches and rebuild trust following crashes in Indonesia and Ethiopia that killed a total of 346 people.

"Duties include: consulting activities and assist in customer support, including flying opportunities," according to a summary seen by Reuters of job terms from a contracting firm carrying out the recruitment on behalf of Boeing.

Pilots must have 1,000 hours of instructor experience and "no incidents, accidents, losses or violations," and be licensed on the 737 and other Boeing jetliners, it said.

"We continue to work closely with global regulators and customers to safely return the 737-8 and 737-9 to service worldwide," a Boeing spokesperson said.

Boeing and the U.S. Federal Aviation Administration (FAA) have said the plane is among the world's safest after improvements to cockpit software and pilot training.

But a smooth return to service is seen as vital for Boeing, which faces costs of $20 billion over the grounding.

Boeing has already drawn up plans for a $1 billion initial investment in pilot recruitment, training and developing a fight deck for the next generation of pilots.

But safety experts said its decision to recruit pilots directly is unusual and signals Boeing's wish to jumpstart the return to service and normalize the Max as soon as possible.

CCL Aviation, based on the British Isle of Man, is hiring the pilots on behalf of Boeing, according to the sources and document. The company calls itself the world's largest provider of flight training personnel and instructor pilots.

CCL Aviation could not immediately be reached for comment.

Extra pilots are just one way Boeing is keeping close tabs on the 737 Max's rollout.

It has held discussions with dozens of airlines to produce documents the carriers will use to discuss the 737 Max safety with passengers, according to a person with knowledge of the effort.

That includes a one-page primer offering flight attendants short, simple responses to questions from passengers about what went wrong during the 737 Max crashes, and how Boeing fixed the problems, the person and a second industry source said.

But the inclusion of language about "shared accountability" led to delays and irked some airlines, the second person said.

Indonesian investigators have said Boeing failed to grasp risks in the design of cockpit software on the Max, sowing the seeds for a 2018 crash that also involved errors by airline workers and the crew. U.S. regulators cleared the Max last month.