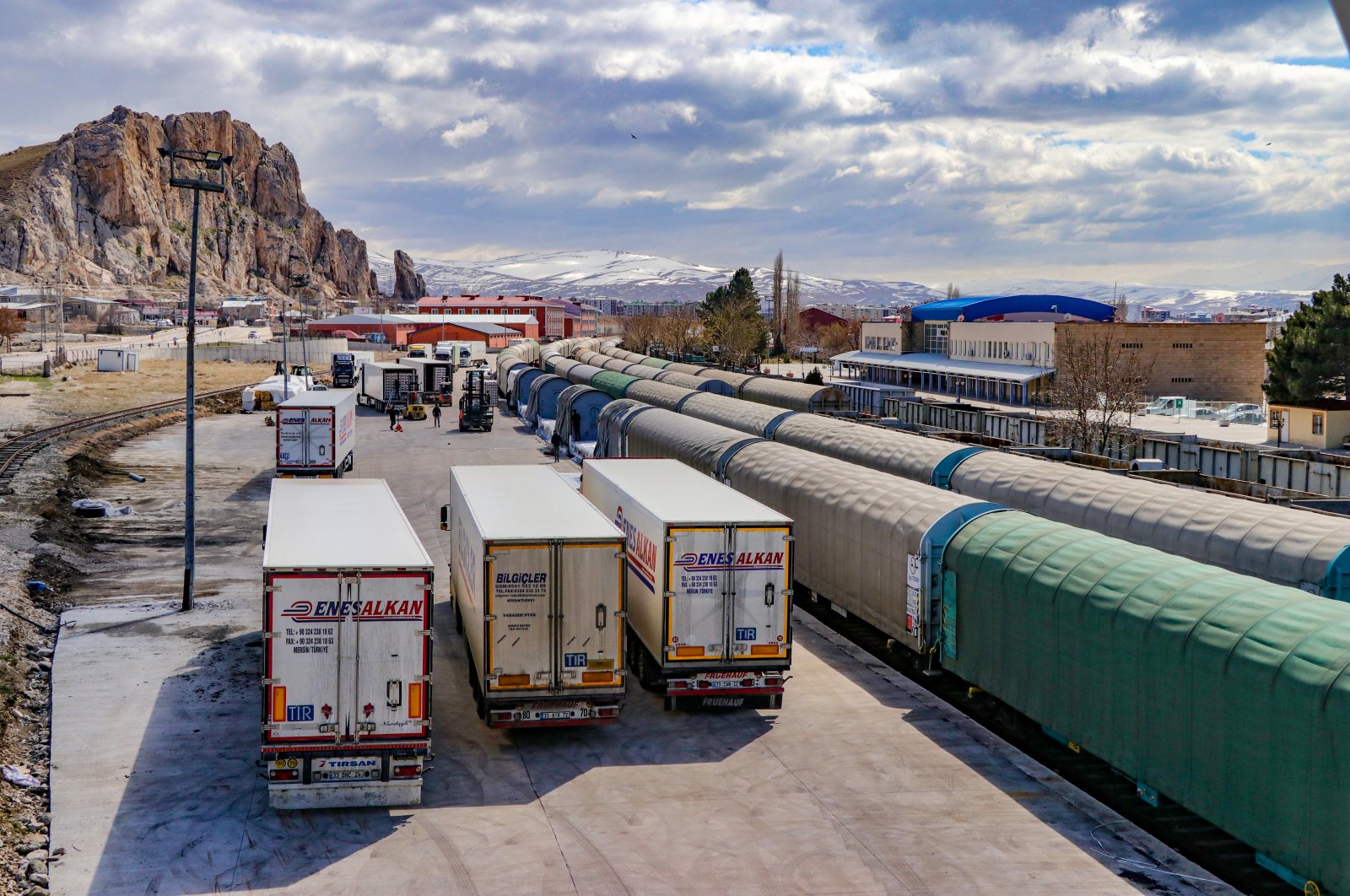 Trucks carrying goods and railway cars are seen near a logistics center in the eastern province of Van near the Iranian border, March 23, 2020. (AA Photo)
by Anadolu Agency Sep 26, 2021 3:32 pm

A critical railway in Turkey’s region, the Istanbul-Tehran-Islamabad (ITI) freight train that is expected to relaunch in the coming period, has created a positive atmosphere for those in the business world.

The train, which connects three countries and provinces in 14 days from end to end, was initially launched in 2009 but was suspended in 2011 due to several delays in Pakistan.

In 2020, at the 10th edition of the Economic Cooperation Organization's (ECO) Transport and Communications Ministers Meeting, participants decided to relaunch the railway in 2021.

Ahmet Cengiz Özdemir, the chairperson of the Foreign Economic Relations Board (DEIK) Turkey-Pakistan Business Council, said the train line holds critical importance for the development of the countries in Turkey's regional integration.

"The railway, aiming to strengthen communication and interaction between the three countries, is not active due to uncertainties and conflicts in the region," he said.

Özdemir underlined that the three countries can benefit from the railway which can be integrated with air and waterways.

The duration of 14 days provides advantages in terms of time and cost compared to seaways, he said.

Touching on China's "Belt and Road" initiative (BRI) to uninterruptedly connect China and Europe, he said the ITI railway is also important for China, considering Chinese investments in Pakistan and Iran.

Thanks to the free trade agreement between China and Pakistan, third countries can make exports to China without custom taxes, he said.

The expected opening of the railway in the coming days, which has large implications for this region, has created a positive environment for the business world, he said. "We are aware that it is a route that will provide access to important markets. We hope that the problems will be resolved soon, even before the end of 2021," he added.

"We expect that Pakistan's foreign trade volume, which is around $65 billion (TL 577.34 billion) currently, will be increased rapidly in the coming years," he stressed.

Thus, important logistics projects such as the ITI, will provide for the strong integration of Pakistan into the global economy, said Özdemir.

He said that Amjad Rafi, his Pakistani counterpart, believes the project will not only reduce costs and time but also diversify Pakistani products in Europe.

Özdemir underlined that the train is also important for passengers because it provides lower prices in comparison to airlines.

He stressed that the line will also provide opportunities for neighboring countries like Afghanistan, Azerbaijan, Kazakhstan, Kyrgyzstan, Tajikistan, Turkmenistan, Uzbekistan and China.

Previously, Ahmet Şahin, Turkey's commercial counselor in the Pakistani capital of Islamabad, said train services, which will accelerate Turkey-Pakistan trade, are expected to start at the end of September.

Stressing that the seaway and highway are slower and more expensive, he expressed that the freight train reduces shipment duration by seven days compared to sea.

Earlier this year, Turkish President Recep Tayyip Erdoğan said studies for the project had been concluded.