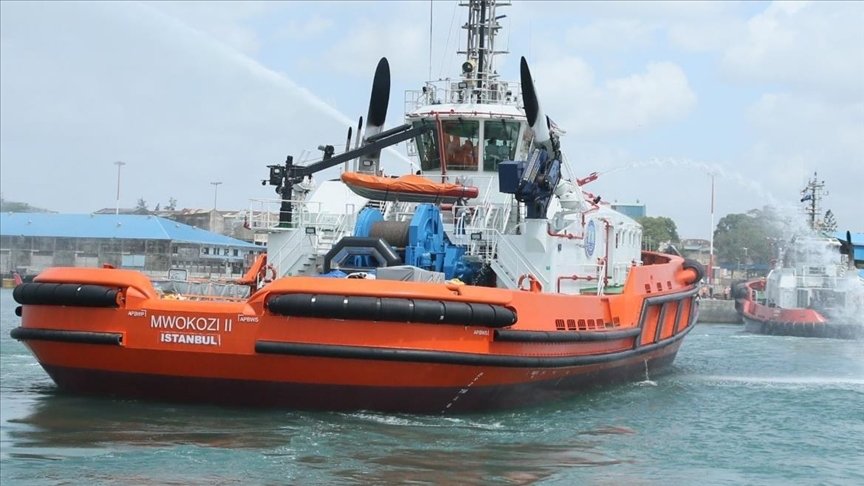 The Kenya Ports Authority (KPS) said Wednesday that the previous day it received a modern Turkish-built tugboat with fire-fighting (Fi-Fi) capabilities that will offer supplementary protection to port facilities and ships.

Mwokozi is the Swahili word for "savior," KPA said on the arrival of the tugboat that was given a water cannon salute by a flotilla of tugs and pilot cutters on her maiden voyage to the Port of Mombasa.

"The vessel has been constructed and equipped according to Safety Of Life At Sea (SOLAS) requirements. (The) Port of Mombasa received a new state-of-the-art tugboat RAstar 4200 built in Turkey at a cost of 1.9 billion shillings ($16.7 million)," said KPA.

The tugboat will be used in Mombasa, the largest port in East Africa, and will be the largest of its kind on the Indian Ocean coast.

"Equipped with excellent maneuverability and packing a hefty 120 tons (132.3 U.S. tons) of bollard pull, the vessel with a length overall of 42 meters (138 feet) and maximum draft of 7.2 meters (24 feet) will deliver enhanced towing and ship handling services for vessels stuck at sea or with mechanical problems," it said.

This is not the first time that Kenya looked to Turkey for heavy-duty machinery.

The Kenyan army placed an order last year for 118 high-performance armored personnel carriers from Turkey, saying it was focused on ensuring the safety of troops fighting al-Shabab insurgents.