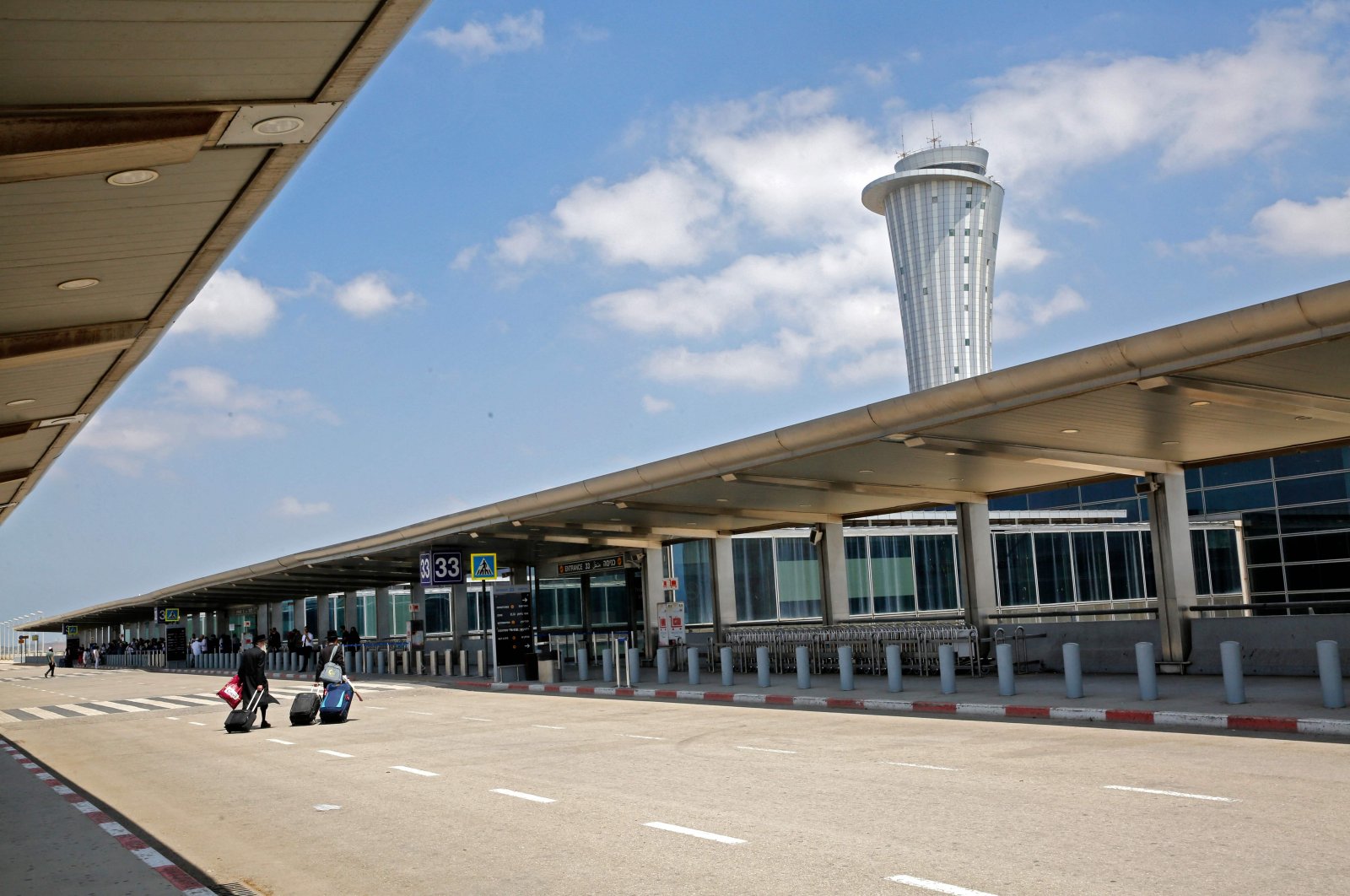 Departing passengers roll their suitcases at the nearly deserted Ben Gurion airport in Lod, near the Israeli coastal city of Tel Aviv, May 13, 2021. (AFP Photo)
by Agencies May 13, 2021 2:18 pm
RECOMMENDED

"The safety and security of our colleagues and customers is always our top priority, and we continue to monitor the situation closely," British Airways said after cancelling its flights to and from Tel Aviv Thursday.

"Due to the current situation in Israel, Lufthansa is suspending its flights to Tel Aviv until Friday, May 14," the German flag carrier said.

Wizz Air said it had delayed its Thursday flight from Abu Dhabi to Tel Aviv until Friday. Emirati carrier Flydubai said it was continuing to operate daily flights from Dubai to Tel Aviv. The airline was scheduled to operate three flights on Thursday, its website showed, while a fourth nighttime flight was cancelled.

Virgin Atlantic had said earlier this week that bookings to Israel had soared 250% week on week after an announcement by Britain that Israel was on its "green list" for the reopening of overseas leisure travel during the COVID-19 pandemic.

British airline easyJet said that it was not yet cancelling its flights to Tel Aviv. Its next flight there is from Berlin and not scheduled until May 16, with a service from London Luton to Tel Aviv scheduled for May 18.

"We will, of course, continue to monitor the situation," an easyJet spokesperson said.

"We have issued a travel waiver to allow customers to adjust their travel through May 25 and will continue to monitor the situation," a United spokeswoman said.

A spokesperson for Delta, which flies to Tel Aviv from New York's John F. Kennedy International (JFK) airport, said it has issued a travel wavier for flights between Tuesday and Thursday and has "no determination about resumption at this juncture."

American Airlines, which also flies between Tel Aviv and JFK, said it had rebooked customers due to fly on Wednesday and Thursday on alternative flights, without providing details, and had issued a waiver for travel scheduled through May 25.

Israel on Monday briefly halted takeoffs from its main Ben Gurion Airport and diverted incoming flights after a Hamas rocket barrage on the Tel Aviv area. The country has a smaller airport in the south, called Ramon, designed to serve as a stop-gap should wartime threats force longer closures of Ben Gurion.

On Thursday, Hamas claimed that it fired a rocket to the airport near the Red Sea port city of Eilat, but an Israeli official speaking to Reuters denied this claim.

El Al Israel Airlines said earlier on Wednesday it stood ready to operate extra flights as required "to keep Israel's skies open." This could include special flights to repatriate Israelis stranded "in locations from which it is not possible to return home," it said in a statement.

An explosion of violence, with fighting in Jerusalem and the Gaza Strip causing mounting civilian deaths, have made international airlines wary of the region. Tensions have been running high since an Israeli court last week ordered the eviction of Palestinian families from the Sheikh Jarrah neighborhood of East Jerusalem. The West Bank, including East Jerusalem, is seen as occupied territory under international law, thus making all Jewish settlements there illegal.

Attacks by far-right Israeli groups and settlers targeting Muslims in East Jerusalem during the Islamic holy montrh of Ramdan, aided by Israeli security forces, led to violence in East Jerusalem and soon echoed in other parts of Palestinian territories.

Israel hit several targets in Gaza with the pretext of attacking militant groups, killing nearly 90 people and injuring hundreds in the process, mostly civilians. Palestinian groups in turn rained rockets into Israel, which hit civilian targets. The Israeli military said 1,500 rockets have been fired from Gaza toward locations in Israel in which six Israelis have been killed and dozens injured.