Turkey’s TAV plans to rev up investments for Almaty Airport 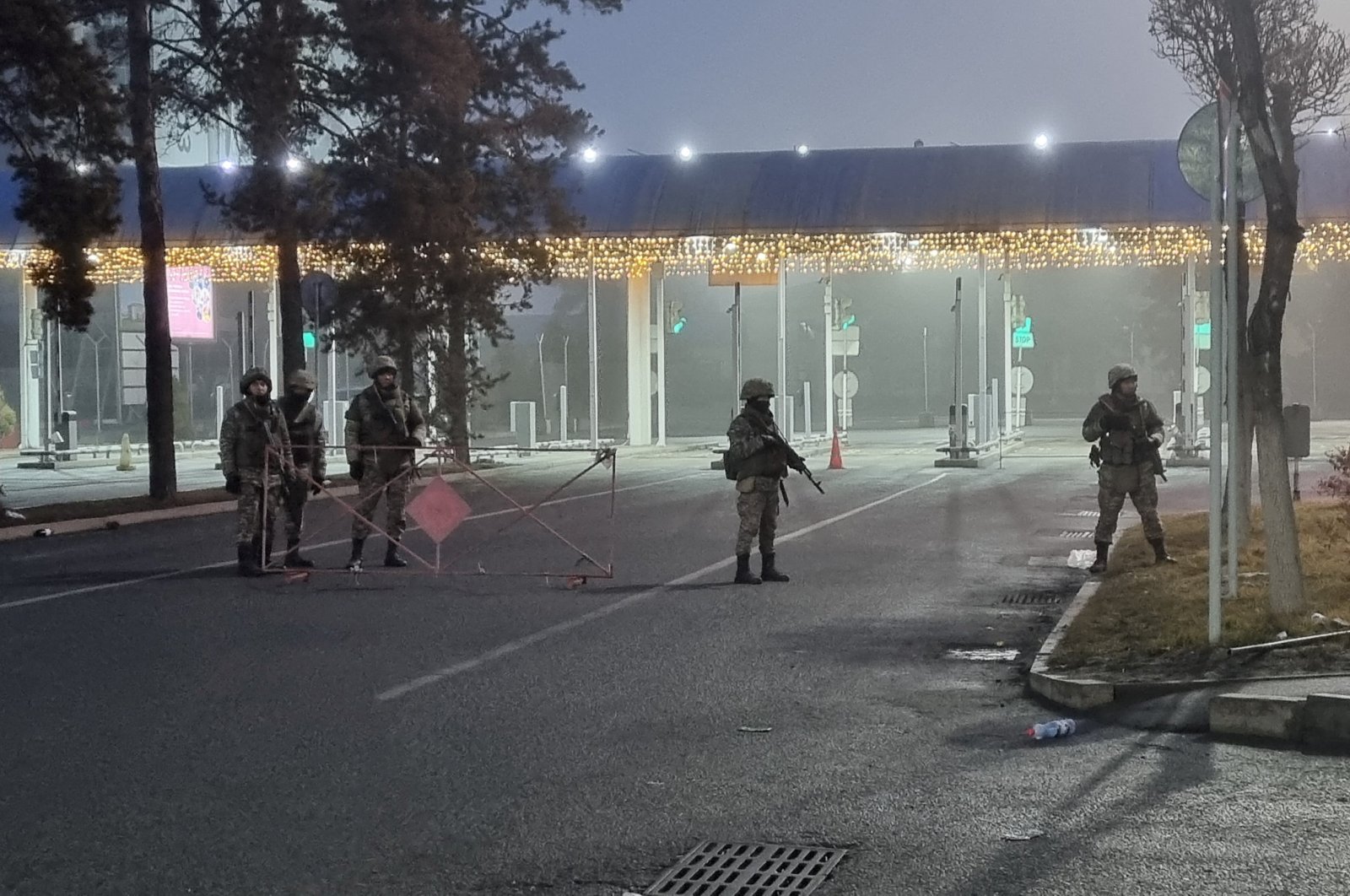 Troops are seen at the international airport of Almaty following anti-government protests triggered by an increase in the fuel prices in Almaty, Kazakhstan, Jan. 6, 2022. (Reuters Photo)
by DAILY SABAH Jan 07, 2022 8:48 pm
RECOMMENDED

Turkish airport operator TAV, which owns the Almaty Airport in Kazakhstan that has been engulfed with mass protest in the last couple of days, will not withdraw from the ex-Soviet country but rather plans to invest a total of $200 million (TL 2.7 billion) in two or three years, its CEO said Friday.

TAV CEO Sani Şener, speaking to Bloomberg HT on the impact of ongoing developments in Kazakhstan on the TAV Airports' investments and businesses, said that all of their personnel are safe and in constant communication.

"We have been in close contact from the moment the incidents started. All of our friends are safe, there is no problem in that sense," he said, noting that armed protestors initially occupied the airport and the terminals were vandalized but the police and the military have retaken control.

"In the first two days, with the thought that the demonstrations could be peaceful, the intervention of the military and the police was minimal, but now there is a very serious intervention," he said.

Şener said that the airport was cleared on Thursday and the cargo flights had resumed.

There are very serious foreign investors in Kazakhstan, both Turkish and foreign, he said along with some of the largest oil and gas companies around the globe, and that what has been going on was something unexpected for them.

The company CEO said that, however, they have enough experience in crisis management.

"The internet is down in the country and communication is very difficult, but we are making calls with satellite phones that we can use in such days," he said.

Şener, who stated that they do not need a special risk scenario as they have a risk scenario in general, and the current situation means a loss for only 10 days maximum according to what they see in the country.

"Almaty airport is the most important economic input of Kazakhstan. It is not possible to close it," he said.

Şener noted that the rebels entered the airport and shops were looted, but other than that, the systems were unharmed.

"We will definitely open the airport in a day or two and continue our investments. The constructions have already started, there is no need for us to withdraw in any way. We will invest a total of $200 million in two or three years," he added.

Demonstrations in the Central Asian country that began as a response to a fuel price hike have swelled into a widespread uprising against the government and ex-leader Nursultan Nazarbayev, 81, the longest-serving ruler of any former Soviet state.

On Friday, gunfire could be heard near the main square in Almaty, where troops had fought protesters throughout Thursday. Armored personnel carriers and troops occupied the square.

Meanwhile, Russian soldiers have brought the airport in Almaty "under full control," authorities in Moscow said on Friday.

The Russian troops had worked with their Kazakh counterparts to restore order to the airport, Russian Defense Ministry spokesperson Igor Konashenkov said, according to the Interfax news agency.

The airport's operations were disrupted after anti-government protesters occupied the transport hub earlier this week. Russia deployed troops to the former Soviet state after Kazakh President Kassym-Jomart Tokayev asked for help in suppressing the demonstrations.

Almaty, Kazakhstan's biggest city and economic hub, has now seen days of rioting, including the torching of government buildings. Tokayev said Friday Almaty had been attacked by "20,000 bandits" with a "clear plan of attack, coordination of actions and high combat readiness."

Şener, further commenting on the foreign companies’ investments in Kazakhstan said the TAV had bought the Almaty Airport for $450 million with the loan from IAC and the European Bank for Reconstruction and Development (EBRD). A Russian fund also partnered with the TAV for the operation of the airport with a 15% stake.

“Almaty is one of our important airports. It constitutes 20% of our overall turnover, but its difference from other airports is that 75% of Almaty Airport's revenues come from cargo, ground handling services and aviation fuel. Therefore, the passenger part accounts for only 25% of the revenue. The airport's closure due to the pandemic or any reason and the decrease or stoppage of passenger flights affects us very little. The important thing is that the planes land there and maintain operations such as cargo transportation, technical landings and ground handling services,” he said.