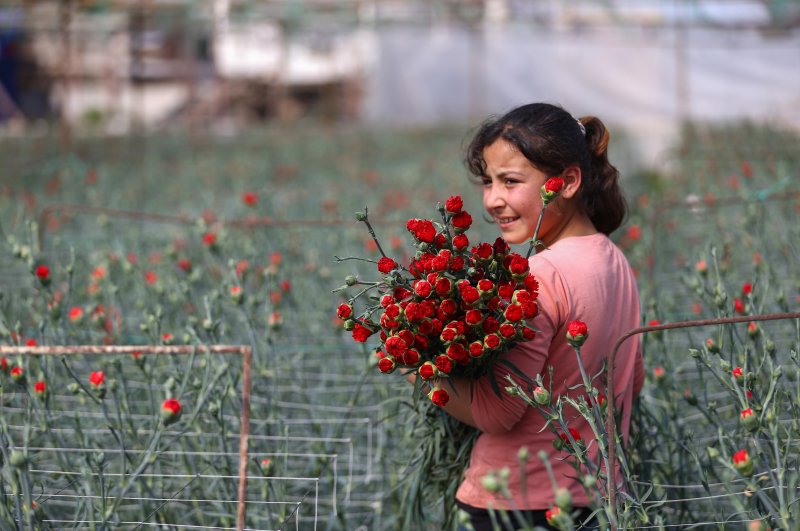 A child poses for the camera with carnations prepared for export from Turkey. (AA Photo)
by Daily Sabah with AA Feb 25, 2020 3:15 pm
Edited By Ayşe Betül Bal
RECOMMENDED

Turkish flower businesses are set to export flowers worth about $8 million to over 50 countries for International Women's Day on March 8, officials said Tuesday.

He said they made Valentine’s Day shipments most recently, sending a total of 60 million cut flowers to 50 countries, including the Netherlands, the U.K., Germany, Romania and Ukraine, and the sector is now very busy for a similar export for Women’s Day.

Saying that each special occasion requires a different type and color of flower, Yılmaz also noted that each country demands different colors of flowers as the demands change depending on domestic markets. As a result, they made all types of flowers available at greenhouses.

Pink, yellow and white carnations took the lead in Women’s Day purchases while red carnations were the most preferred ones on Valentine’s Day, Feb. 14.

“The light pink flowers are highly preferable in the U.K., while we can’t sell those to Romania. Romanian purchasers want red and white flowers while Greek purchasers mostly buy white flowers. Pastel colors are most preferable in the Western European countries while those in the Eastern European countries buy mostly vivid colored-flowers,” he said.

Speaking of the producing process along with the employment opportunities of the sector, Yılmaz said the sector has an approximately 60,000-square-meter production area, 6,000 square meters of which is in a closed area.