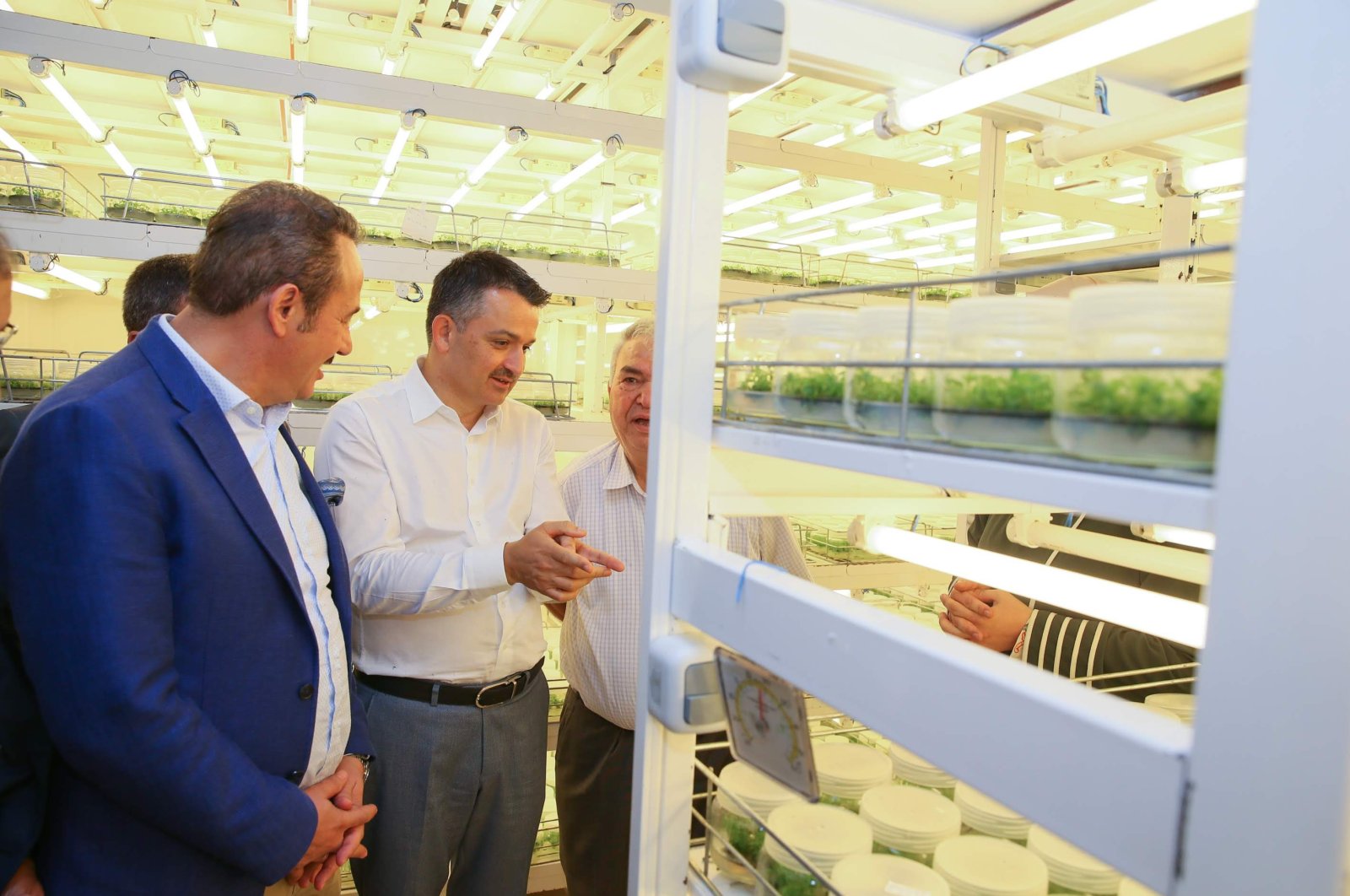 The minister of agriculture and forestry gave an interview to Sabah daily, underlining that Turkey is self-sufficient in its food supply and is ready to battle the pandemic

Minister of Agriculture and Forestry Bekir Pakdemirli said that Turkey continues to take necessary precautions in the battle against the pandemic and that the country is prepared “more than yesterday” in terms of its food supply in the face of the ongoing global crisis.

“Nobody should worry; we have an abundance of food,” he said. “Everybody should concentrate on protecting their health and continuing their work.”

Pakdemirli gave an interview to Sabah daily regarding many issues, including the food sector’s growth performance, why Turkey imports food, farmers’ use of technology and food waste.

Regarding Turkey’s precautions against a possible second wave of the pandemic, the minister said the nation is prepared more than ever and even looks to feed other countries.

“We have an abundance of food, and we are looking forward to exporting it. We are planning which countries to export to and how we will do it. Aside from that, we have had significant experience in battling the pandemic since the month of March. With that experience, we are more prepared to battle such an unpredictable process,” he said.

Responding to a question regarding the source of such an abundance of food, he said production has continued without halt and that there was a drop in consumption because of the pandemic.

“As the Ministry of Agriculture, we have closely followed the situation surrounding COVID-19 from the moment it emerged in China. Even when there were no cases in our country, we began taking precautions in the fields of food supply, continuation of agricultural production and harvest. To realize these goals, we met with prominent players from the retail sector and producers. Some people even claimed that there were active cases in Turkey back when there were not,” he said, adding that officials responded to the allegations by saying that even if there were no cases at the time, they had to be prepared for when they would arrive. Eventually, the first infections were recorded in Turkey in late March.

“Our stance is still the same. As we took the necessary steps, we grew 2.6% in the first quarter of 2020 and 4% in the second quarter. Then, there was a drop in tourist numbers and food consumption due to the pandemic. In joint efforts with our Ministry of Trade, we are planning to export that excess food,” he said.

Pakdemirli also said that the actual growth numbers met the planned figures. “We grew as we planned in the first half of this year. Of course, the necessary steps that we took in coordination with other governmental institutions and our strategies have contributed a lot to these growth figures,” he said.

The minister added that the Ministry of Agriculture and Forestry “never sleeps” and is active throughout Turkey.

“We are constantly on alert regarding any natural disasters, forest fires, freezing temperatures and drought. As we are always wary of any disaster, we are also prepared to battle a second possible wave of the pandemic. Our citizens have also grown more concerned and conscious regarding the ongoing global crisis. We have a lot of work to do before the year 2020 concludes; our agenda is very busy,” he said.

“For example, we had wanted to plant 83 million trees by the end of 2020. We have not given up on that goal, but as the pandemic continues, we will stretch the timeline to realize this. We will continue to plant trees while maintaining our social distance. We will pay TL 2.8 billion ($370 million) to the forest villagers and forest development cooperatives. We will set up 28 honey forests in 28 provinces and also medical-aromatic botanical gardens in 200 villages. We will provide our farmers with seeds and start the planting of them in an area of 1 million decares of fallow land. We will also open up 350,000 decares of land to irrigation,” Pakdemirli said, adding that the ministry will also end land consolidation of 3.5 million decares.

The minister also stated that Turkey will declare 15 regions in eight provinces protected environments and increase the number of such sanctuaries to 280.

“The ministry will also allocate new areas to fish breeders in seven provinces. We will also support beekeepers with millions of lira. In short, we will continue working until the end of the year, nonstop,” he said.

Pakdemirli also responded to the opposition parties’ claims that Turkey is not self-sufficient.

“We have to underline this first, Turkey is quite self-sufficient in its food supplies. But unfortunately, food is a topic that is often exploited in our political scene. Of course, a country needs to be self-sufficient in strategic products such as wheat and we are also self-sufficient in that field too. But why do we import wheat? Do we consume the wheat we export? No. We use the wheat in production and later export it. It is plain and simple: We convert the imported goods into added-value products and export them,” he said.

Pakdemirli also added that Turkey naturally imports some goods for public consumption too.

“Of course we import some foods. It is impossible for a country to produce every single food, and this is not a necessity either. For example, Turkey may not be a suitable environment to produce dragon fruit and may import it. There is nothing bad about this. But it is necessary not to twist the numbers and reflect the reality as it is. For example, Turkey has an agricultural gross national product (GNP) of $48 billion (TL 362.76 billion). On the other hand, the Netherlands, which is always given as a good example, only has an agricultural GNP of $17 billion, which means Turkey has three times more than them. They have an export value of $100 billion, while Turkey has $18 billion in exports and $12.6 billion in imports. This means that Turkey is 150% self-sufficient. We are a country that exports nearly 7,000 products to 200 countries,” the minister stated, adding that the nation has set up an import system that contributes billions of dollars in added value to the national economy.

“We import wheat and produce flour, pasta, biscuits and export it. We are number one in flour exports, and we rank second in pasta exports,” he said.

Pakdemirli also added that it is a distortion of facts to portray the current situation as a failure.

“Turkey is self-sufficient in food. We have a wheat production of 20 million tons and a consumption of 18 million tons,” he said.

“It may be a little cliche, but we place great importance on agriculture 4.0. Our farmers’ grasp of technology is very good. We have two megaprojects that will better make use of the technology and data to increase production, e-tags for cows and electric tractors. Both projects are in their final phases. E-tags are like attaching smartphones to the cows’ ears. With this technology, farmers will be able to access all kinds of information regarding the animal including its heartbeat, blood pressure, its rutting season and which medications it takes. The rutting season alone will create a 10% to 15% increase in births. The e-tag’s pilot scheme has been very successful, and we are heading toward the 20,000-application mark. Over 20 million cattle will have e-tags by the end of the year. On the other hand, electric tractor production is ongoing. We will distribute the tractors to all 81 provinces next year, and I think there will be a boom in demand for them, as they will allow farmers to spend only TL 20 on an electric charge per day instead of TL 200 for fuel,” he concluded.