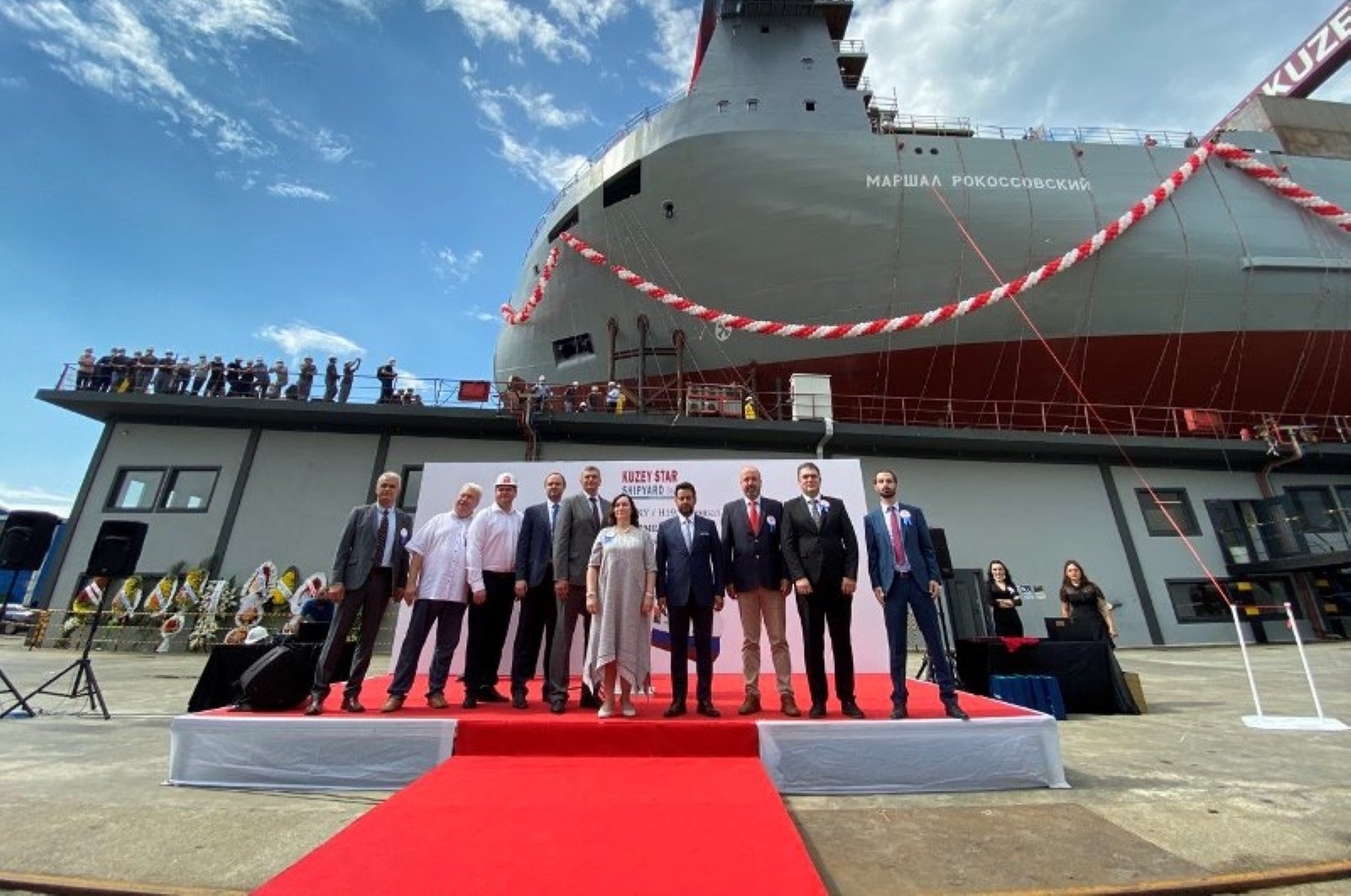 The Turkish shipbuilding industry is strengthening its presence in global markets by increasing the number of special-purpose projects they carry out and by competing with rivals on the basis of technology and quality.

As part of those projects that were dubbed the first in their field, Kuzey Star Shipyard most recently built Russia's first liquefied natural gas (LNG)-powered roll-on/roll-off (ro-ro) ship for FSUE Rosmorport in Tuzla, Istanbul.

The 200-meter-long (656-foot-long) ro-ro ship named Marshal Rokossovsky was constructed as part of a cooperation between the Kuzey Star Shipyard and LLC Nevsky Shipyard and was launched last week in Istanbul. It is set to be used on the Ust-Luga-Baltiysk (Kaliningrad seaport) line by the Russian company.

The ship, along with the cars, trucks and rigs, will be able to transport wagons. It is scheduled to be delivered in the first quarter of 2021.

Meanwhile, construction is underway for General Chernyakhovsky, the second ro-ro ship to be delivered to the same firm by the Kuzey Star Shipyard.

During the launching ceremony, Vasily Strugov, deputy general director for the fleet of FSUE Rosmorport, said that the commissioning of the newly built ferries will update the “fleet engaged in this strategically important crossing for the country, reorient part of the cargo flow currently flowing to and from the Kaliningrad Region through the territory of neighboring countries, as well as ensure the transportation of goods in volumes necessary for domestic consumption.” He added that today, there are no such "environmentally friendly" ferries operating both on low-sulfur diesel fuel and on LNG in Russia, so thus this ferry will take the company to a pioneering position.

The Turkish shipbuilding sector took one of the heaviest blows from the 2008 global financial crisis. Unable to compete with Far Eastern countries in the construction of tanker and dry cargo ships, local shipyards turned to special purpose boat construction, a niche market at the time. However, the shipyards started to benefit from that strategic move in the last few years, especially in the last five years by focusing on research and development (R&D) and innovation.

Among those, electric ferries, which are charged at the automatic charging stations located at both piers of the line they operate, can complete their journey to the other pier without using any additional energy or fuel and refill their batteries again during the loading and unloading of the vehicles.

These ferries, which consume minimum energy by evaluating factors such as weather conditions, are also equipped with autonomous navigation systems to reduce fuel and energy consumption. Instead of being pushed to the pier with the conventional method of propellers during loading and unloading, the ferries stays in place with the vacuum system on the pier.

Construction of factory fishing vessels is also one other field that made Turkey a world-renowned brand, Seven said.

He described the vessels as a land facility that fits into a ship, as it allows all the related stages to be carried out on the ship from processing and packaging the fish and delivering frozen and packaged products to the purchasers when it reaches the land, to separate facilities that process fish feed and fish oil.

"These ships are floating factories,” he said, adding that the vessels have strong propulsion systems. Ships, which have superior features in generating sustainable energy sources, generate electricity from the kinetic energy generated by crane movements and occurring when the net is released and pulled into the sea.

The world’s first floating power plants, known as powerships, were also built by a Turkish conglomerate Karadeniz Holding – which has the world’s only powership fleet and has been sending its ships worldwide to meet urgent energy needs.

The shipbuilding industry, which could not deliver ships on time due to COVID-19-related travel bans in March and April, saw a rapid rise in exports in June and July.

The sector, which increased its exports by 58.8% in June compared with the same period of the previous year, posted a 59.5% increase in July, reaching $141 million (TL 1 billion) in overseas sales. The shipbuilding, with these figures, became the sector that increased its exports the most during that period. In the first seven months of the year, it exported a total of $641 million worth of products and aims to exceed last year’s $1 billion in exports over the course of the year.