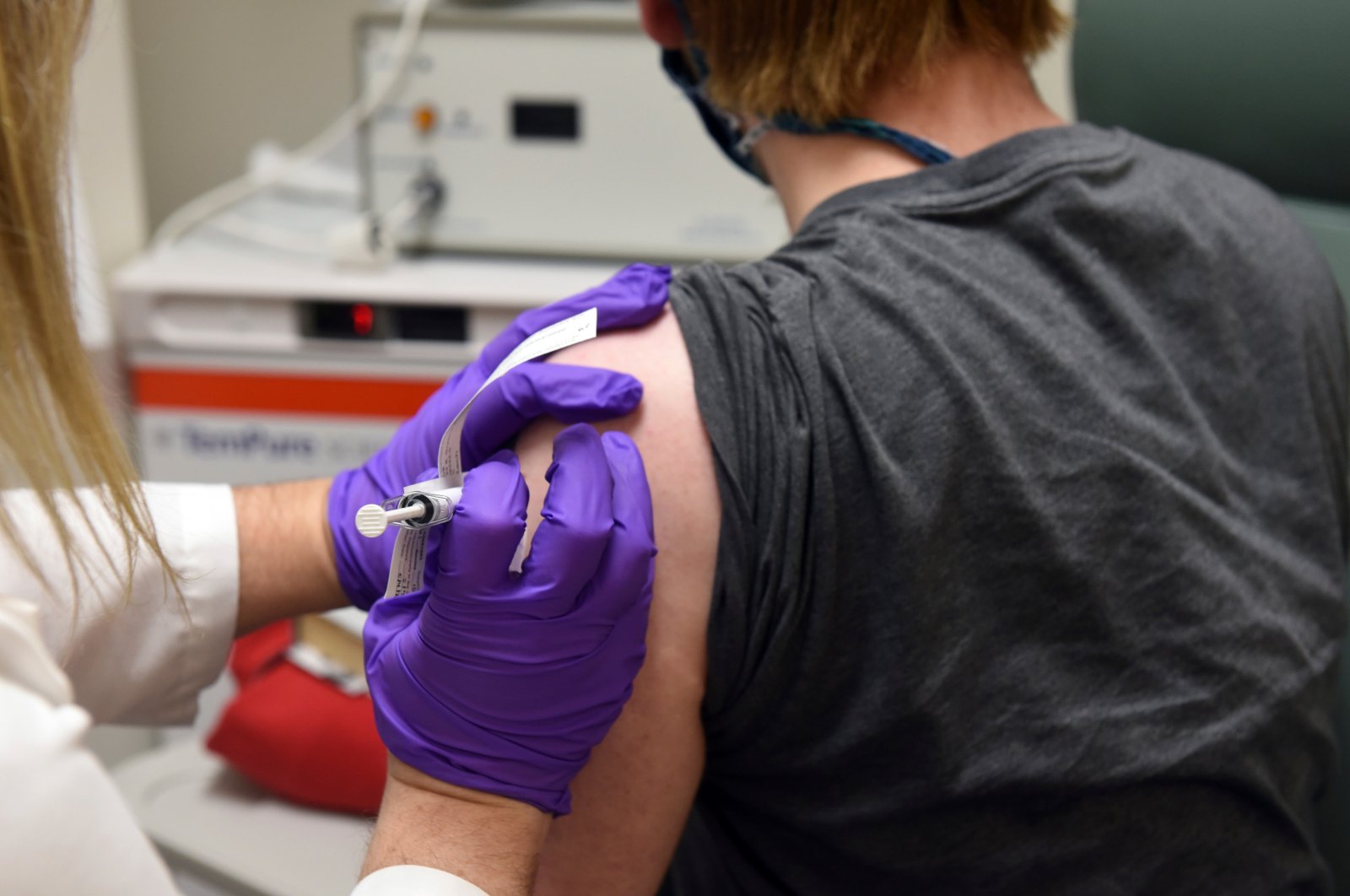 The first patient enrolled in Pfizer's COVID-19 coronavirus vaccine clinical trial at the University of Maryland School of Medicine receives an injection in Baltimore, Maryland, May 4, 2020. (AP Photo)
by Agencies Jul 20, 2020 10:37 am
RECOMMENDED

British officials said they have signed a deal to buy 90 million doses of experimental coronavirus vaccines being developed by the U.S. pharmaceutical giant Pfizer and others.

The British government said in a statement Monday that it had secured access to a vaccine candidate being developed by Pfizer and Germany's BioNTech, in addition to another experimental vaccine researched by France's Valneva.

Business Secretary Alok Sharma said Britain would now have access to three different types of vaccines being developed domestically and around the world, and it had also launched a website for volunteers to sign up for vaccine studies.

"The hunt to find a vaccine is a truly global endeavor, and we are doing everything we can to ensure the British public get access to a safe and effective coronavirus vaccine as soon as possible," said Sharma.

The U.K. had previously signed a deal with AstraZeneca to provide 100 million doses of the coronavirus vaccine being tested by Oxford University, which is expected to announce further results later Monday.

“Millions of people could be vaccinated against coronavirus,” the government statement said, citing the three different vaccines it has now invested in.

Prime Minister Boris Johnson said he was "hopeful" of a vaccine, "but to say that I'm 100% confident that we will get a vaccine this year or indeed next year is, alas, just an exaggeration."

"It may be that the vaccine is going to come riding over the hill like the cavalry, but we just can't count on it right now," he said in a televised interview.

Britain has been one of the worst-affected countries in the world since the outbreak began, suffering more than 45,000 deaths.

Health Secretary Matt Hancock said an effective vaccine was "our best hope of defeating coronavirus and returning to life as normal."

"I urge everyone who can to back the national effort and sign up to the NHS COVID-19 vaccine research registry to help find a vaccine as soon as possible," Hancock said.

Although it is still unclear which if any of the vaccines will ultimately prove effective against the virus, Britain and other rich countries are already investing in the vaccines to ensure there is enough manufacturing capacity to deliver any successful candidate. Vaccines typically take years to develop and more than a dozen are in the early stages of testing globally.

The U.K. order was the first one for BioNtech and Pfizer, the Mainz-based firm said Monday.

The agreement is to supply 30 million doses of the BNT162 vaccine in 2020 and 2021, "subject to clinical success and regulatory approval," a statement said.

Financial details of the deal were not given.

BioNtech chief executive and co-founder Uğur Şahin expressed his thanks to the British government for its support and trust.

"This agreement is part of our commitment to address the pandemic by creating a global supply. We are in advanced discussions with multiple other government bodies and hope to announce additional supply agreements soon," he said.

First- and second-phase trials of four RNA vaccine candidates from BioNtech and Pfizer are currently underway in Germany and the U.S.

The U.S. Food and Drug Administration (FDA) recently gave "fast-track designation" to two of those vaccines.

BioNtech and Pfizer have already released initial results from the ongoing trials and several experts reacted positively to the progress.

People participating in the clinical trials, aged between 18 and 55, developed antibodies against the virus, which causes COVID-19 lung disease, although it remains unclear whether these antibodies protect against infection. This is to be tested among a sample group of 30,000.

The companies said a lead vaccine candidate may be selected for phase 2b or phase 3 of testing later this month.

This would allow an application for regulatory approval to be lodged in October this year, they added.

Curevac, another German company working on a potential coronavirus vaccine, announced on Monday a multimillion-euro investment from GlaxoSmithKline (GSK).

The British pharmaceutical company is to make a 130-million-pound (163-million-dollar) equity investment in CureVac, amounting to an almost 10% stake, as well as an upfront payment of 104 million pounds, a statement said.

The strategic collaboration will focus on researching, developing and manufacturing up to five RNA-based vaccines and antibodies targeting infectious disease pathogens, Curevac said.

The Tuebingen-based firm's ongoing clinical trials for RNA vaccines against the novel coronavirus and rabies are not part of the collaboration, it added.

The German government took a stake in Curevac of around 23% in June, in a bid to prevent a foreign takeover in the global race for a vaccine.