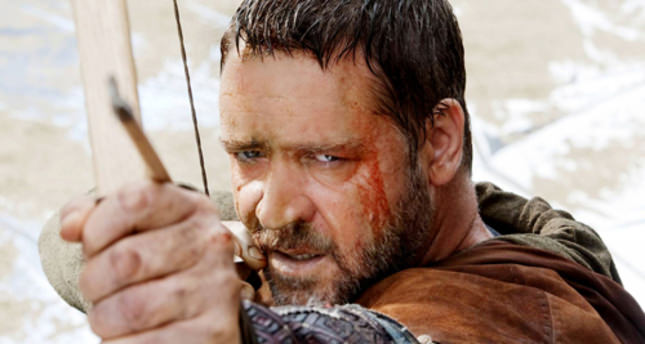 With three famous Turkish actors starring in Oscar-winner Crowe's "The Water Diviner," the actor-turneddirector preferred a cast of Turks, including extras to remain true to the story, reveals Daily Sabah

New details have become available on the selection of actors, extras and location of Russell Crowe's directorial debut "The Water Diviner" to be shot in both Australia and Turkey. The Aussie star chose to work mostly with Australian Turks in addition to the two prominent Turkish actors, Yılmaz Erdogan and Cem Yılmaz, Turkish TV actor Mert Fırat, and young Australians Ryan Corr - playing one of his sons- and Jai Courtney, old friends Jacqueline McKenzie and Steve Bastoni, Ukrainian-born beauty Olga Kurylenko. His co-producer is Muzaffer Yıldırım, also Turkish and Menders Utku's Mars Entertainment Group.
Impress Café, a popular venue at the center of Sydney's predominantly Turkish suburb of Auburn, also referred to as "Little Istanbul" was the point of application to star in the movie. An announcement was made, drawing crowds of Turks interested in starring in the movie as extras.
Casting agency manager Barbara Harvey was personally involved in the selection process.
An extra who attended a two day shoot could not get over how down-to-earth and friendly Crowe is. "He even lit up my cigarette," said the extra, who did not want to reveal her name due to a non-disclosure agreement and loved the colorful costumes that are sure to be a feast for the eyes.
Early starts and long waits were made bearable with an open breakfast buffet and refreshments available to actors and extras. Crowe was also kind enough to take photos with the crew on the condition that they kept the photos to themselves as sweet memories from the shoot.
The behind-the-scene photographs that emerged back in January showed a hard-working Crowe sweating under 50 degrees in South Australia's Flinders Ranges. As the director and the leading man, he looked like he was not cutting himself any slack. In his directing-debut he will be playing an Australian father, Connor, who lost his three sons in Gallipoli during World War I and travels across the world to Turkey to claim the bodies of his sons lost in the battle. Crowe stated that the story is not about the war but about fathers and sons, "a tale of loss and discovery," in his own words. Apart from occasional flashbacks, most of the film takes place in 1919, in the aftermath of World War I.
Written by Andrew Anastasios and Andrew Knight, "The Water Diviner" emerged from a letter Anastasis found in archives. Crowe had been considering a few scripts back then, but immediately fell in love when this one fell to his lap. Crowe had said that he enjoyed directing and added, ''Film is in my DNA, I did my first TV show at six, I've worked in front of the camera since I was a kid, and I've had access throughout my career to some of the greatest minds in the business.'' According to Crowe, the story picks up where "Gallipoli," the Australian classic film left off and depicts the aftermath of war - the ones left behind. "There's a whole bunch of stuff to do with being a father, grief and loss." The Australian production is almost complete with the Turkey leg of the production set to kick off on Feb. 26.
The shoot is planned to take place mostly around the historical peninsula of Istanbul, in Sultanahmet, Çemberlitas, Balat and the Topkapı
Palace, all located in the Fatih district. Fatih Mayor Mustafa Demir stated that he is very pleased and fully supports the project. The shoot will continue until mid-March and will move to Fethiye's Kayaköy village, a UNESCO-protected "ghost town" located in the southern coast of Turkey, serving as a historical monument with some 500 houses, including Greek Orthodox Churches from the 18th and 19th centuries under the protection of the Turkish Government.
The film will also be showing Istanbul under invasion. The movie has already been sold to many international distribution companies and although a certain release date is not yet set, it is likely to reach cinemas in early 2015.