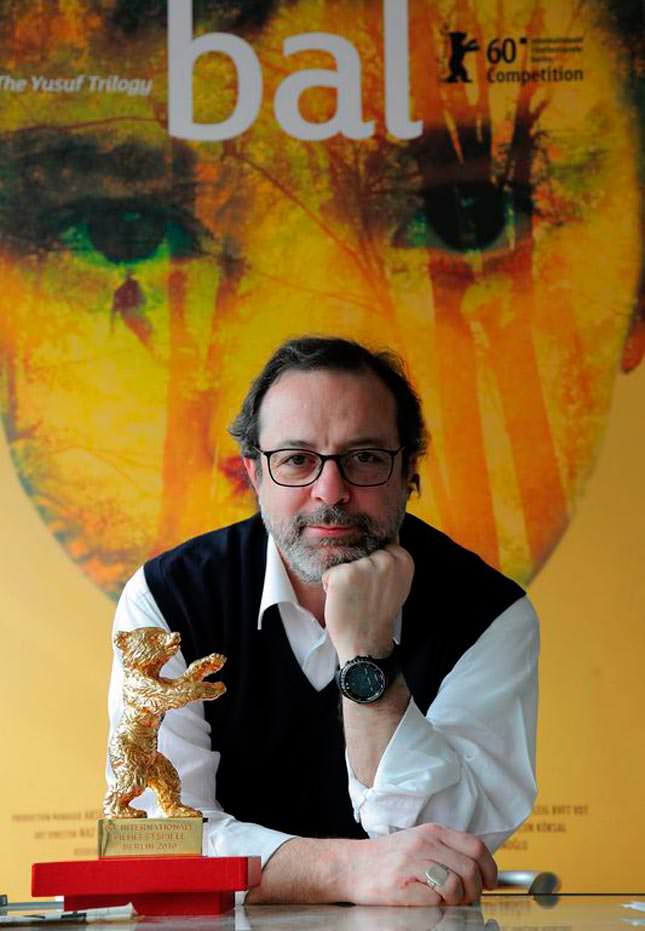 Movie theaters across Turkey welcomed 14 million viewers in the months of January and February this year, the coldest months of the year, setting a new record in the history of Turkish cinema.

Due to the release of numerous popular local films and sequels, the occupancy rate at theaters reached 86 percent, with 73 percent of moviegoers preferring local movies.

The year 2014 also marked another high for Turkish cinema, with Semih Kaplanoglu winning the Golden Bear for the Best Film with "Bal" (Honey).

Turkish directors such as Rome-based Ferzan Özpetek and Nuri Bilge Ceylan, Best Director winner and director of "Uzak" (Distant) and "Bir Zamanlar Anadolu'da (Once Upon a Time in Anatolia), are winning awards across the world, including the Cannes Film Festival. They are the new, more artistic face of the Turkish cinema abroad, while the domestic market has been primarily dominated by comedies. Less-arty forms of cinema, such as comedy, are making competition quite fierce these days, as evidenced by "Recep Ivedik 4" breaking two records in a row at the box office, according to Anadolu Agency statistics.

The movie was seen by over two million viewers, becoming the most-viewed movie by setting a new record with the first three-day audience of about 1.65 million since its release on Feb. 21. The mastermind and lead actor of the film, Sahan Gökbahar, earned approximately TL 10 million per week.

Compared to last year, the number of people who chose watching movies as their choice of entertainment, increased by about five percent. While the number of Turkish moviegoers measured at about 11 million in 2005, the numbers doubled in 2013 to over 22 million, according to the numbers announced by the Ministry of Culture and Tourism.

The boom was mostly due to the rise in the number of Turkish productions, which increased by 300 percent in the last eight years as a result of the Ministry's TL 66 million to the industry. With such a huge backing from the Ministry of Culture and Tourism, the number of Turkish movies increased to 70 in 2013 from 27 in 2005. Out of these 70 movies, 22 were supported by the ministry.
Here is a look at the films that have been watched by over one million people in the first two months of 2014:

The comedy is directed by Togan Gökbakar. Sahan Gökbakar stars in the film also featuring Barıs Bulut, Arda Hacıoglu and Irfan Kangı. Gökbakar decided to shoot the films after the popularity of the character on his TV show and the trailer of the first movie was viewed by about five million people. "Recep Ivedik 4," the last film in the Recep Ivedik series, focuses on Ivedik's adventure to win a competition held on a deserted island in the Maldives in order to save the football field for his local team back home.

The comedy movie "Dügün Dernek" attracted 6,600,893 viewers in the 12th week of its screening and became the most-watched movie for the last 30 years in Turkey, a title which previously belonged to "Fetih 1453" (Conquest 1453). Shown in 229 theaters, the film tells the story of four friends attempting to hold a co-op wedding. The film in which Ahmet Kural and Murat Cemcir star grossed over TL 65 million.

Shot in Çanakkale, "Eyvah Eyvah 3" is another comedy starring Ata Demirer, Demet Akbag and Özge Borak. The movie follows the adventures of clarinet player Hüseyin Badem, who married to his beloved Müjgan, and his friend, singer Firuzan. Released in 325 theaters, the film was watched by over three million people for 3.5 weeks and grossed TL 31 million.

Released in 264 theatres in the first days of 2014, "Patron Mutlu Son Istiyor" starring Tolga Çevik and Ezgi Mola, is another Turkish film that exceeded the threshold of one million viewers. The film follows the Cappadocia adventures of scriptwriter Sinan.

"Itirazım Var" (I Have an Objection) is the latest cinema project by Onur Ünlü, who is well-known by TV audiences for his comedy series "Leyla ile Mecnun."

"Peri Masalı" (A Fairy Tale), directed by Biray Dalkıran, also the director of Araf (The Abortion), Cehennem 3D (Hell 3D) and Bana Bir Soygun Yaz (Write Me a Robbery), is a romantic comedy focusing on its main character's familial affairs and his relationship with his beloved.

"Hayat Sana Güzel" (You Are Living the Life) is the eighth film of director and scriptwriter Murat Seker and stars Sevket Çoruh. Timur Acar, Tuba Ünsal and Hakan Bilgin, who also starred in the director's "Çakallarla Dans" (Dance with the Jackals) series. The comedy will be released in early April.

"Sadece Sen" (Only You) is a romantic drama directed by Hakan Yonat. Belçim Bilgin, Ibrahim Çelikkol, Kerem Can and Necmi Yapıcı appear in the film coming to theaters in March. Directed by Serkan Açar and Yılmaz Okumus, and starring Cezmi Baskın and Levent Ülgen, Mehmet Usta and Serhat Özcan, the comedy will be released early March.