A film 40 years in the making 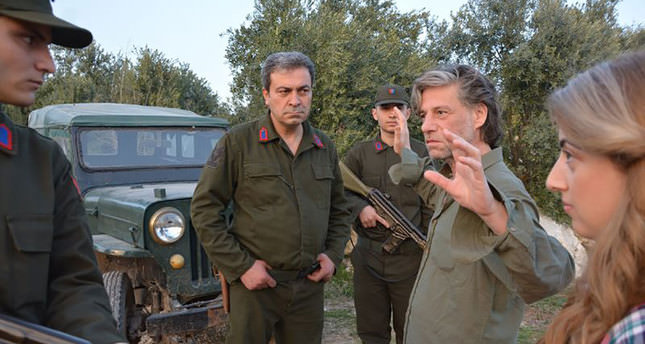 Based on a true story, in Director Yasin Korkmaz's film "Netekim karakolu," amateur teenagers try to make a film a decade before the 1980 coup and end up in trouble when coup authorities think they are an illegal organization training for attacks

MERSİN – The movie "Netekim Karakolu," starring famous Turkish actor which Birol Ünel, tells the story of some young villagers taken into custody during the 1980 Turkish military coup is almost complete. The movie mainly takes place in Mersin where the military intervention was witnessed. Yasin Korkmaz, son of Zeynel Korkmaz, hoped to make a movie when he was just 15 years of age, but was unable to complete it due to the military coup. Finally he found the opportunity to direct his almost 40-year-old dream. Filming started four months ago in Mersin's Erdemli district. The movie set was open to students to visit for one day. The visitors, mostly consisting of students, had the chance to talk with director Yasin Korkmaz and the lead actors.

The whole shoot served as a workshop. "Everyone in the town of Limonlu was interested in the film. Therefore, in order to teach the students something, we opened the doors of our set to them for a day," said Korkmaz. He added that the movie tells the humorous yet ironic story of a number of young people after a police query during the military coup. In the movie, the teenagers had attempted to make an action movie with an amateur camera 10 years ahead of the coup, and they get in trouble when the film is discovered during a house search after the Sept. 12 coup. Stating that the movie script is based on eyewitness accounts, Korkmaz added, "A police commander searches the house of a teenager and finds an amateur movie shot 10 years earlier plus some photos. The teenagers are then taken into custody. The other young people in the photos are accused of murder, receiving guerrilla training and forming illegal terrorist organizations. The police commander only aims to impress his senior officers by arresting an illegal organization. The commander thinks that these amateur filmmakers are the real criminals.

The story then turns into a tragicomedy, and the police station becomes the center of hilarious events that follow.