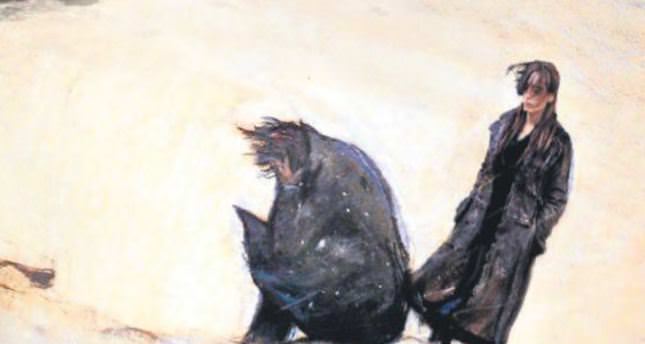 by Anadolu Agency May 17, 2014 12:00 am
Renow ned and critically acclaimed Turkish director Nuri Bilge Ceylan's new film "Kış Uykusu" (Winter Sleep) premiered at the 67th Cannes Film Festival Friday night. But Ceylan is no stranger to Cannes. His short film "Koza" (Cocoon) was screened at Cannes in May 1995, becoming the first Turkish short film to be selected for competition at the festival. His next entry in Cannes came with "Uzak" (Distance), which won the Grand Prix in 2003. This was followed by "İklimler" (Climates), which scooped the FIPRESCI Prize in 2006, and "Üç Maymun" (Three Monkeys), for which Ceylan was awarded the Best Director award in 2008.

In 2009, Ceylan was a member of the main competition jury. In 2011, he won the Grand Prix a second time with his film "Bir Zamanlar Anadolu" (Once upon a time in Anatolia). New Zealand-based director, producer and screenwriter Jane Campion, winner of the Palme d'Or for "The Piano," is the president of the jury of the 67th Festival de Cannes, which runs until May 25. According to Anadolu Agency (AA) she will be surrounded by eight luminaries of world cinema from China, Korea, Denmark, Iran, the United States, France and Mexico, including Sofia Coppola and Leila Hatami.

Canada represented by three films While Ceylan is not new to Cannes, Hollywood star Ryan Reynolds is not a frequent visitor to the festival. But this year in a psychological thriller the Hollywood star plays a young father whose daughter suddenly disappears, which also premiered at the Cannes Film Festival on Thursday, as reported by DPA.

Canadian director Atom Egoyan's "The Captive" tells the story of a blue-collar father, Matthew, who briefly leaves his daughter unattended on the backseat of his truck, while he pops into a local store. When he returns the child has vanished. Eight years later after a series of disturbing events, Matthew, played by Vancouverborn Reynolds, starts to believe that his daughter is still alive.

In making the film, Egoyan returns to the same bleak snow-covered landscape that was the backdrop for his 1997 film "The Sweet Hereafter" about a small town reeling after a tragic school bus accident.

Egoyan, 53, has made more than a dozen feature films. His 2008 movie "Adoration" was also selected for Cannes' main competition.
He is also one of three Canadians competing in Cannes this year for the Palme d'Or.

This should increase the chances of Canada walking away with one of the festival's top prizes, which are to be handed out at a gala ceremony on May 24. The festival will also witness the premiere of the new film from Egoyan's compatriot, David Cronenberg, who makes his fifth appearance in the Palme d'Or race with a satire on Hollywood child actors called "Maps to the Stars." The third Canadian in the battle for the festival's top honors is cinema's wunderkind Xavier Dolan, who aged just 25, has made five feature films with his debut "I Killed My Mother" winning accolades around the world. After several years edging his way up through Cannes' various forums, Dolan has finally graduated to the festival's main competition with "Mommy," about a single mother battling to raise an oftenviolent son.
RELATED TOPICS