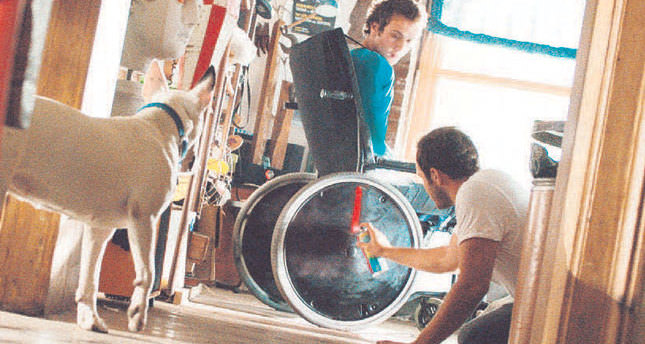 ANKARA — According to to a statement by festival organizer Puruli Culture Center, everyone has the right to be involved in cultural life, and therefore, it is a must to create the necessary conditions for disabled people. All film screenings and workshops at tha Accesible Film Festival (AEFF) were arranged with full access. Recognized as Turkey's first "accessible" film festival, the event enables visually and hearing-impaired people to enjoy cinema based on visual and audial images like other people. It also contributes to disabled people's fair participation in social life. The AEFF presents various films in sign language for audiences with hearing loss and audio-descriptions for audience members with impaired vision. Audience members without disabilities are able to watch the screenings with headsets, which are available on request at film venues. The Association of Audio-Description was responsible for arranging audio-description, sign language interpreting and subtitles. Similarly to last year's festival, film screenings and related events are open to the public free of charge. The films are categorized in seven sections: Competition without Barriers, Films without Barriers, From the World, From the History of Cinema, Turkish Cinema, the Long and Short of it and For Children. The event displays the best examples of long feature, short and documentary films. Sign interpreters are available during the sessions.

Disabled children can enjoy watching films with their peers during the festival. A special animation workshop will be held on May 24 at the Ulucanlar Prison Culture and Art Center.

As part of Films Without Barriers, the documentary film "Camera Obscura" tells the inspiring story of a group of visually impaired young people who spent a month to write and direct a film on their own. The wellknown Turkish film "Hababam Sınıfı" (Outrageous Class) will be presented with audio-description and subtitles. The Competition Without Barriers includes award-winning Turkish and foreign films. Director Tayfun Pirselimoğlu and actresses Bennu Yıldırımlar and Selen Uçar will present the best film, director, script and audience awards. The festival also offers a chance to meet with directors and film casts. The awards will be given during an award ceremony on May 25 at the opera hall.