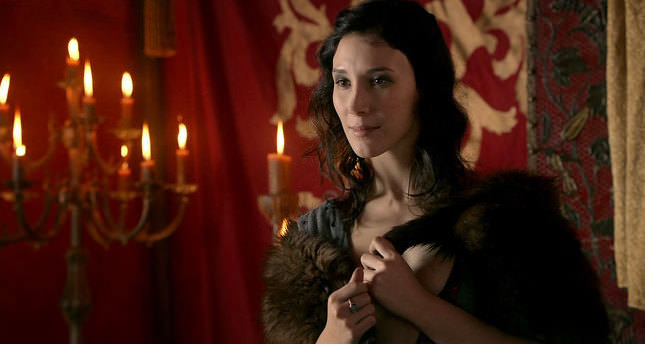 Turkish actress Sibel Kekilli, who played Shae in "Game of Thrones," has left the SHOW. The actress, whose character was the partner of the show's most colorful character Tyrion, answered questions from fans on HBO's website where she discussed the best and most difficult things about participating in such a major project

ISTANBUL — German actress of Turkish descent Sibel Kekilli was the focus of attention for the last few episodes of "Game of Thrones" when her relationship with Lord Tyrion Lannister hit rock bottom after Tyrion's marriage to Sansa Stark, the daughter of Lannister's archenemies. Fans were left wondering whether she would finally leave the Seven Kingdoms after Tyrion ordered her to leave the capital amid a slur of insults, including calling her a prostitute. The hurt and betrayed Shae made a return at Tyrion's trial for murdering King Joffrey, completely betraying Tyrion.

In the Q&A, Kekilli described Shae and Tyrion's relationship in three words: love, passionate, dangerous.
She also stated that Shae's betrayal was as a result of how hurt she was by Tyrion's words and that she wanted to hurt him too. Noting that Shae always had to fight to stay alive and since she did everything for her love for Tyrion, she was extremely hurt and didn't have any choice but "to die or work with the Lannisters." When asked if Shae saw Tyrion's dismissal coming or if she was shocked to be rejected, Kekilli said, "I guess she saw it coming through Tyrion's loving behavior for Sansa and how he acted against Shae. He was so careful and tender to Sansa and more and more cold to Shae. That hurt her very much.
But she never, ever thought that Tyrion would call her a whore, even if he did it to protect her. That was the most unexpected, vulnerable moment for her.

Shae thought that if you love someone you would never give up hope for a single second. Shae is not naive but love can make someone blind." On the dramatic trial scene, Kekilli said, "Shae loved Tyrion so much, and now they are facing each other in court and both are simply trying to save their lives." It was the most difficult scene in the whole series, she added. Kekilli initially appeared as a guest star in the first season of the show; however, with her acting talent and the strength of the series, her character won the hearts of fans and she joined the starring cast for a second season as Shae. Kekilli was discovered while shopping at a mall in Cologne and asked by the casting director to audition for an acting role. She then won the lead in Turkish-born Germany-based director Fatih Akın's "Gegen die Wand" (Head-On).

The film was a huge success, winning several awards. Until 2009 she starred in other films, including "Eve Dönüş" (Homecoming), which won her the Best Actress award at the Antalya Golden Orange Film Festival in 2006 and "When We Leave" (Die Frernde), which won her a Lola for Best Actress in 2010.
RELATED TOPICS