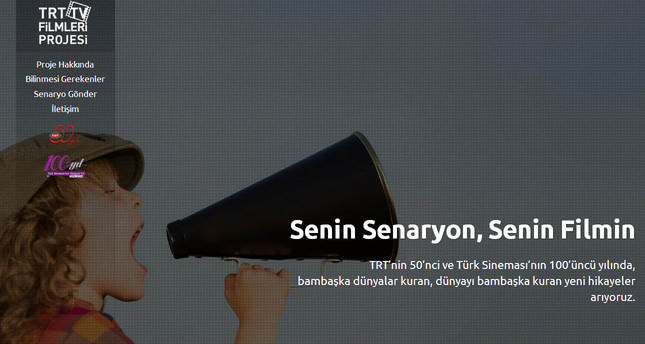 by Daily Sabah May 28, 2014 12:00 am
ISTANBUL — Turkish Radio and Television Corporation (TRT), which is celebrating the 50th anniversary of its foundation, has launched a new project that will boost Turkish cinema on its centenary.

The TRT TV Films Project comes with the slogan "Your script, your film" and is waiting for any independent filmmakers, regardless of whether or not they have been involved in cinema before, without any limitation of genre or topic, to come forward and show off their skills.

TRT's assistant General Manager İbrahim Eren informed viewers on the project on TRT Haber channel. "For everyone who has got something to say, for anyone who looks at life from a different perspective, for anyone who is dreaming of creating another life can apply to our project. You don't need to be a producer, you don't need to be a director. We are not asking for any qualification. Just a script that takes the story one step ahead is enough," said Eren.

Each script presented will be evaluated by experts in each genre and projects selected will receive financial support from TRT.

The deadline for applications is June 31.