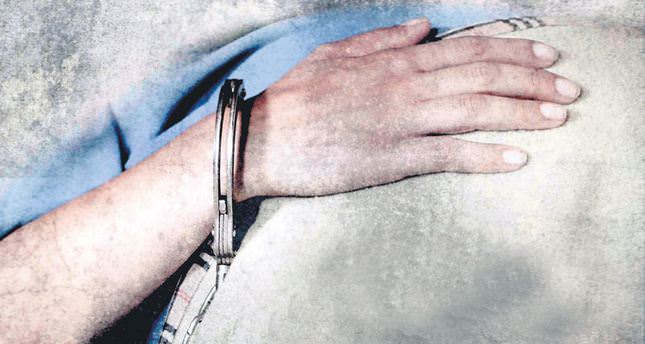 by Burcu Arık Özer Jun 05, 2014 12:00 am
The lead character in Turkish director Utku Çelik's first full-length film "Blue Man" is a Canadian archaeologist who is investigating mass graves during the early days of the Iraq War before being kidnapped. He wakes up in a basement, unable to remember how he got there. He must piece together the past of the man who brought him there and discover the identity of the pregnant woman who is being held with him.

The movie first won the Gold Reel award in November at the International Nevada Film Festival, and has gone on to win several national and international awards. Çelik made many documentaries before his feature film, and said, "I must say I cannot forget those works, and I am grateful. I had the intention for a long time to direct a full-length movie which would take place in just one room," said Çelik, adding that he was inspired by Iraq war-themed documentaries. "I spoke to my script adviser Bryan Keithley. He suggested that I base my movie on true stories," Çelik said. "It was amazing for me to find the Iraqi Blue Man graveyard during my research."

Many mass graves have been dug up in Iraq since the U.S. invasion there toppled the regime of Saddam Hussein. Over 1 million Iraqis are believed to have gone missing in Iraq during Hussein's rule as a result of executions and war, of whom hundreds of thousands are thought to be in mass graves. Çelik said using only a single space in his movie helped, "I think it creates more tension and suspense for the audience.

There is a kidnapped man with no [history] and a woman in a single room. It creates an atmosphere of suspicion." Çelik wanted to reflect the psychological effect of the war, rather than show scenes which have already appeared in many Hollywood movies. "Blue Man focuses on the unknowns of the war, women's rights and the psychological elements dragging the country back into conflict."

Foreign hostages in Iraq have appeared in other Hollywood films. Directed by Spanish dierctor Rodrigo Cortes, a 2010 Spanish- American film "Buried" portrayed an American civilian truck driver contractor working in Iraq, who after being attacked, finds himself buried alive in a wooden coffin with a mobile phone.

As early as April 2004, Iraqi insurgents began taking foreign civilian hostages in Iraq. Insurgents have since kidnapped more than 200 foreigners and dozens of foreign hostages have been killed.
RELATED TOPICS