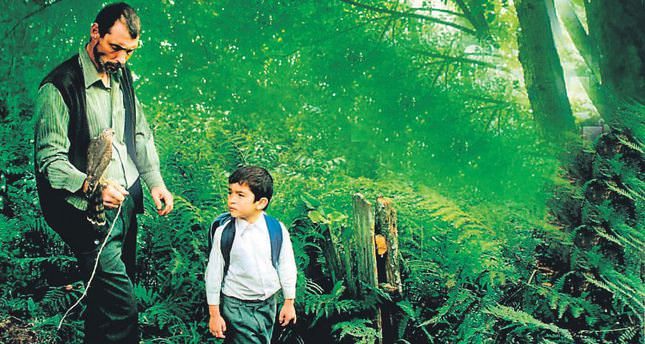 The box office success of Nuri Bilge Ceylan's Palme d'Or winning 'Winter Sleep' has signaled a change in the taste of Turkish movie lovers. But the prestige of the Cannes Film Festival is not the only reason behind the film's popularity

When weekend box-office results for Nuri Bilge Ceylan's Palme d'Or winner "Winter Sleep" were announced last week, I breathed a sigh of relief. Like many fellow journalists I would have hated to see a great Turkish film go unrecognized in its native country, with only a couple of thousand tickets sold. Judging by the box-office success of Ceylan's previous films, news of low ticket sales would have hardly come as a surprise.

Apparently there was nothing to worry about. Exactly 43,495 tickets were sold in the first three days that followed the release of "Winter Sleep," which was the best box-office figure for a Ceylan film. "Winter Sleep" made TL 546,000, excellent news for the film's producers.
There were comparisons with "Recep İvedik 4", the fourth installment of the immensely popular film series which has been seen by more than one 1.5 million people in its opening weekend. " 'Winter Sleep' is 1/33rd of 'Recep İvedik' " one newspaper noted, comparing the two films according to the size of their box-office success. Although not quite as popular as "İvedik,"

Ceylan's film was shown at 123 cinemas in 39 cities, and it can change the fate of arthouse films in Turkish cinemas. After Hollywood studios started controlling film distribution channels in Turkey, experimental and festival-friendly films had a difficult time reaching audiences. According to film critic Selin Gürel, the most important reason behind Ceylan's box-office success is the decision made by the multiplex cinema group Cinemaximum to show "Winter Sleep" at more than 100 film theaters. "Cinemaximum is showing the film at its most popular and most preferred theaters," Gürel said. "Had the chain screened the film at its smaller theaters or decided against screening it, then 'Winter Sleep' would have faced the same fate as previous Ceylan films."

So is it all about the screening decisions made by cinema managers? "The main factor behind the lack of interest in arthouse films is the monopoly of cinema chains,"

Gürel explained. "I want to remind you the example of Michael Haneke's 'Amour' which also won the Palme d'Or. Haneke's film was screened in just three theaters but was nevertheless watched by 30,000 people. An arthouse film with popular appeal can be successful, provided that it is shown in right theaters."

According to film critic Nil Kural, the responsibility falls on the shoulders of the private sector and entrepreneurs. The year-long festival "Başka Sinema," which offers screenings of arthouse films in theaters in Ankara, Istanbul, Bursa and Eskisehir, is one such effort. "They show arthouse films for long periods of time and they create a sense of community among their spectators," Kural said.

Although she admired the Turkish audiences' appreciation of Ceylan's 196-minute long film, Kural said this was not enough for a sustainable arthouse film market in Turkey. "What is lacking is a cultural policy that would support the private sector's investments and transform those into an organizational structure." "Until 12 years ago, a Nuri Bilge Ceylan film with almost 50,000 ticket sales in its opening weekend would be inconceivable," critic Kerem Akça said. So what has changed in the intervening years? "Distant" was seen by 63,845 people. "Three Monkeys" was screened at 57 theaters and sold 127,668 tickets. "Once Upon a Time in Anatolia" was seen by 161,181 people. Akça predicted that the total number of ticket sales for "Winter Sleep" would exceed 200,000. The reason behind this success is not only the Palme d'Or, according to Akça. "The casting of actors like Yavuz Bingöl, Yılmaz Erdoğan, Demet Akbağ and Haluk Bilginer played a crucial role," Akça explained. Since those actors all have their own audiences, it was easier to get beyond the 100k limit.

Semih Kaplanoğlu's film "Honey," which won the Golden Bear at Berlin Film Festival in 2010, sold 31,191 tickets when it was screened in
Turkey. According to Akça, that may be the approximate size of Turkey's arthouse film audience. If an arthouse film exceeds the 100,000 limit, it is safe to assume that the success is due to what Akça calls the "actor factor."

The rise in interest toward arthouse films is also related to the dominance of Turkish films in the box-office. Last year, there was only one foreign language title in the list of 10 highest grossing films. Cem Yılmaz's "CM101MMXI Fundamentals," a filmed version of his stand-up sessions, led the list with the impressive figure of 3,744,836 viewers. Yılmaz Erdoğan's "The Butterfly's Dream" was also in the list, with more than 2 million film tickets sold. If Akça is right in his reasoning, then the prospective director of arthouse films should pick her actors wisely, and make the best of this phenomenal interest shown by audiences to Turkish films. A combination of international prestige and popular actors may prove to be the salvation of Turkish arthouse films.
RELATED TOPICS