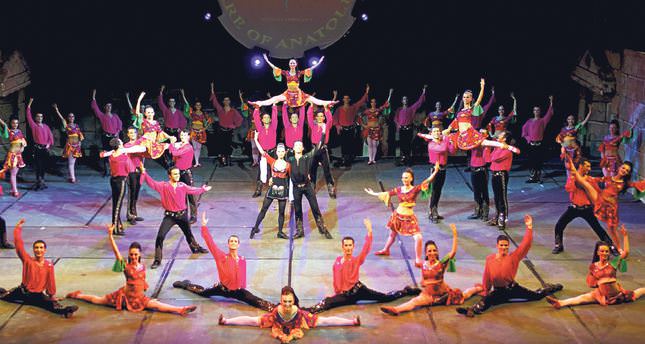 Last year's most successful Turkish movie was not a feature film but a recorded version of Cem Yılmaz's standup performances. In Britain a similar trend of broadcasting stage performances in theaters has proved immensely successful

Theater is a fragile art. It is difficult and often expensive to produce theater plays for Instagram addicts and FMO sufferers (those who suffer from the so-called "fear of missing out") the idea of being locked up in a theater for a few hours, with no connection to gadgets except during intervals, is akin to making a journey to hell. But for a few experimental plays, most theater productions offer an ancient experience and ask for the full attention of their viewers. Broadcasting theater productions in cinemas therefore seems to run contrary to the essential principles of theater.

But in Britain, the Royal National Theater has managed to increase its audiences by doing exactly that. The National Theater Live is an initiative that broadcasts live performances to cinemas not only in Britain, but around the world. Founded in 2009, it has attracted the attention of both film and theater lovers, and increased ticket sales of traditional performances. Recent NT screenings have included Moliere's "Phedre," Shakespeare's "King Lear" and "Coriolanus," and contemporary productions such as "The Audience" by Peter Morgan.

Anyone who has been to London's West End and has walked with empty hands from one of their box-offices will know the difficulty of getting tickets for plays. In 2010 I had attempted to get a ticket for Sam Mendes's production of "Richard III" at the Old Vic. After waiting for two hours in the queue, I was saddened to hear that there were no seats left with the exception of a perfectly located but aggressively priced one (it cost 200 pounds [TL 730.5], which I did not have, at least in cash). Luckily, and thanks to the IKSV, "Richard III" was shown in Istanbul a few months later, when I had the chance to watch the wonderful Kevin Spacey on stage.

National Theater's live productions seem to have solved this widespread problem of insufficient seats for great plays. NT broadcasts are shown in over 200 cinemas.

The project's developers boast of reaching more than 50,000 viewers. Their screenings have expanded to numerous countries in recent years and there were 22 countries on the NT list when I last checked. In another initiative, the BBC has collaborated with the Arts Council, and screened performances from the Globe Theater, another venue where viewers have difficulty finding tickets.

In Turkey, similar initiatives have the potential to make money for theater companies and cinema managers alike. Just look at Cem Yılmaz, Turkey's most successful stand-up artist, who has directed films such as "A.R.O.G" and "Hokkabaz" to the delight of audiences (and to mixed reactions from critics). Recorded versions of his live performances have proved insanely successful at the box office. In 2013 Yilmaz's curiously titled "CM101MMXI Fundamentals" was seen by no less than 3,771,866 people. A recorded version of his stand-up shows, the film offered 140 minutes of good jokes, and was ideal as weekend entertainment.

In 2012, the ticket prices for a Cem Yılmaz performance in an Istanbul show ranged from TL 55 to TL 98. "CM101MMXI Fundamentals," the film version, offered not only a cheaper experience (about TL 10) but also a more convenient one. After all, Cem Yılmaz can't be present in all cities of Turkey around the clock, like some sort of genie.

When one looks at private theater companies like DOT, or Berkun Oya's KREK, where it is difficult and costly to get tickets, similar solutions and viewing initiatives come to mind. According to journalist Nihan Bora, who writes about theater and performing arts, this issue is a bit problematic in Turkey. "Such initiatives will not attract genuine theater audiences here," she said. "They can be popular in cities with little access to theaterre productions but broadcasting performances to Anatolian cities would only have a short term effect on the art's success."

Bora pointed to the importance of seeing performances live on stage. "To react to the performance in the present time, to experience the same feelings with the rest of the audience...Those lie at the heart of theatre," she said. Fakiye Özsoysal, associate professor at Istanbul University's theatre department, agreed with Bora: "Theatre is not cinema. A performance is not repeatable and this makes theatre unique. Broadcasting plays in cinemas is not theatre."

Film critic Kerem Akça said he was disturbed to see "CM101MMXI Fundamentals" make more money than all the previous Cem Yılmaz films combined (with the exception of "G.O.R.A"). "It was a huge blow to cinema as an art form, and to all the effort that goes into the making of feature length films," he said.

Akça pointed to the genre of "concert films" which are enjoyed by music lovers. "'Anadolu Atesi' was screened in 67 theaters in 2012. It was shot in 3D and yet, only 3,500 people went to see it," he said. "Recorded performances of actors like Yılmaz Erdogan can be successful in cinemas. When they go to a film theater Turkish audiences want to laugh more than anything else."

When I asked actor and playwright Sinan Tuzcu about this new trend, he emphasized the difference between two types of audiences. "In the current environment it is naive to say that a collaboration between theater and film makers will increase the number of audiences," he said. "The tastes of film and theater audiences are incredibly different from one another.

You show the audience a theater production and a televised version of the same play, and they will take satisfaction from entirely different aspects of the production."

For Tuzcu the difference between the expectations of audiences is key. "One group wants to have a vegetarian dish for dinner, the other wants a roast lamb." As an actor he performs both in films (he played Mustafa Kemal Atatürk in Zülfü Livaneli's 2010 film "Veda") and on stage, so which dish does he prefer? "I prefer the vegetarian dish," he said, "by which I mean the theater. But then again, cinema is so powerful that it can serve you a vegetarian dish and make you feel as if you just had roast lamb."

That is because although fragile, theater is the more truthful form. "Only when they realize the illusory nature of cinema that the audiences go back to the source, to the text of the play," he said.
Last Update: Jul 05, 2014 1:13 am
RELATED TOPICS