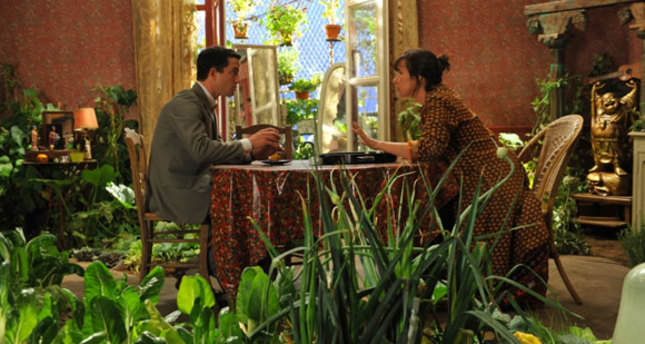 by Özkan Binol Jul 25, 2014 12:00 am
Turkish moviegoers first met French actor Anne Le Ny in "Atilla Marcel," a French comedy that was featured in Başka Sinema (A Different Cinema), a series of international and local film screenings. She became a shining star with her role as Yvonne in the French comedydrama "Intouchables." She is also an acclaimed screenwriter and director. We had an enjoyable chat about her films and what she thinks about today's movie world.

Özkan Binol: You mostly select women as the subject of your films. Is there any relation between "Cornouaille" and your own life story?

Anne Le Ny: I grew up in Paris, yet my family comes from the region [coast of Brittany] where the film takes place. We even have a summer house there. "Cornouaille" does not have an entirely realistic plot [the protagonist believes the house is haunted]. It was different from Paris - a special place where I spent my holidays and lost myself in dreams. In other words, the story does not have any personal relation to me at all.

ÖB: How did you decide to become a director? You also write scripts. Were you unhappy as an actor or did you want to voice your message in a different way?

ALN: Yes, at first I wrote some scripts that I did not want to direct. I thought I had not used some parts of my brain until that time.

Later, I became really frustrated with the cinematic style of the director who directed my film. I said, "Ok, I can do it." My boyfriend also gave me a lot of support. When I set to work, I enjoyed it.

ÖB: The cinema world is dominated mainly by male directors. How does it feel to be a female in the industry? Have you encountered any difficulties?

ALN: I am a part of this industry and did not experience any conflicts. Neither actors nor technical teams have had any problem with me. Although, I had one in my second film. While the first one focuses on men, the second film draws attention to both women and men. The female character is more dominant in "Cornouaille," which makes it special for me - it's not common. Generally, if the protagonist is male, he is expected to influence and address everyone. On the other hand, if the leading character is a woman, she is only expected to influence her counterparts. It looks like an ethnic discrimination. To make it clear, women compose half of humankind and we have to live together. The problems of women also concern men. I cannot understand why the things related with women are less universal.

Why am I expected to have an interest in Tom Hanks's problems but not a woman's trouble? It has always been a mystery to me.

ÖB: We are also suffering from the same problems. Similar to anywhere else around the world, there are fewer female directors. The movie world is in the hands of male directors. Women have less opportunity to become a director.

ALN: I know, but the situation is somewhat different among my generation. They show "bossy" attitudes toward me, but I do not bother.

ÖB: Do you try to reach women rather than men in your films? How do they find your works? Is there any difference between the feedback from male and female spectators?

ALN: It is difficult to answer this question, because my films are in different categories. My first film, "Ceux Qui Restent" (Those Who Remain), is a drama that makes audiences cry. The second one, "Les Invites De Mon Per" (My Father's Guests), is a comedy. "Cornouaille" is a more complex film that depicts the personal goals of people, but [they are] positive goals.

Disappointment comes when the old man falls in love. The man puts pressure on the female character - I mean she cannot make free choice. He does not sexually abuse her, never. The woman thinks she has to go because she grew up in a violent community. She might have shown her anger and said "no," but she is afraid of saying it. Everything is complicated for everybody.

ÖB: How do you select actors? As an example, the leading actor in "Cornouaille," Vanessa Paradis, is an international film star. Did the producers influence your choice?

ALN: I believe selecting an actor is similar to falling in love. There were both objective and special reasons for selecting Paradis for this role. First, she is a well-known actor. The leading character is an ordinary woman, but people around her are mysterious. There were few actors suitable for the role. We did not search for someone who believes in mysteries. Paradis is talented, beautiful, delicate and kind. She also has a strong character, which you may not easily shake. I like her opposite features. Further, she is very sweet and hardworking. For example, she had to bathe in freezing water 30 times and managed successfully. Paradis never complained and she did her best. I am planning to work with her in the future.

ÖB: Which directors are close to you in terms of cinema language?

ALN: There are many directors whom I feel are close to myself. François Truffaut, Howard Hawks and Woody Allen are some of them.

ÖB: Violence toward women comes to the forefront in the world's agenda, mainly in less developed countries. Are you planning to mention this issue in your future films?

ALN: I feel very lucky with respect to my job, homeland and the time that I was born. Western countries have to put up a fight against many other subjects, except our fundamental rights. Many women across the world are struggling to have their basic rights. I get frustrated about the pressures on women.

A film made in Saudi Arabia by a female director created a significant impression in France. When I read her interviews, I understood how she had to hide herself and how she suffered from many difficulties. My life is rather easy. We should take all necessary steps if they will be in favor of humankind and the world. I am able to provide the necessary materials for my films; there is no problem with being a woman. In France, it is difficult to become a female director in commercial cinema, but not in the world of art movies. They are even more popular.

ÖB: Do you have any unforgettable moments during filming?

ALN: They were all funny and entertaining. There is the common misbelief that a film crew that shoots a comedy does not do much work. Yet, we work. When you are making a drama, you have to work even harder. In short, I enjoyed all of them.
RELATED TOPICS