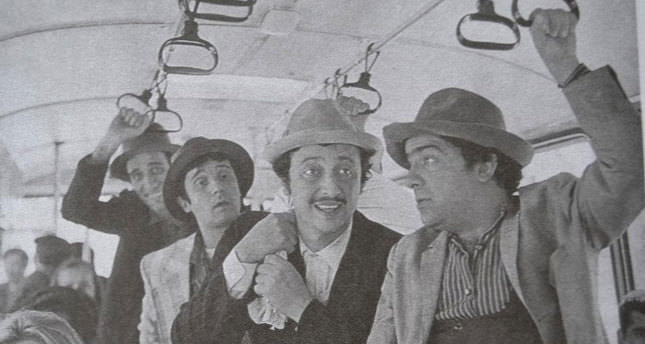 by Özkan Binol Aug 02, 2014 12:00 am
In recent years, Turkish films have unquestionably shaken box office records. Indeed, those who are familiar with the successful history of Turkish cinema are already aware of this news. The golden era of Yeşilçam (1950-1975) released numerous films for which viewers stood in long queues at movie theaters. The name comes from Yeşilçam Street, an area of Beyoğlu that served as the epicenter of Turkish popular cinema. The top films were shown for weeks, most of which were melodramas reflecting typical Turkish families.

However, everything changed with the arrival of television after 1975. Cinema operators turned their heads to the adult film industry when Turkish people started to spend most of their time in front of the TV screen. Families' interest in open-air movie theaters declined due to adult film screenings. The loss of interest caused a decrease in the number of moviegoers and thereby box office revenues. Until the end of the 1980s, "female-focused" films, most of which starred actress Müjde Ar and others with leading Turkish arabesque musicians won the hearts of audiences. Nevertheless, Turkish cinema was looking forward to bringing back those flourishing days.

In 1988, Ertem Eğilmez, the legendary founder of the Arzu Film production company directed "Arabesk" (Arabesque) with the unforgettable tragicomic story of two lovers who cannot ever come together. Starring Müjde Ar, Şener Şen and Uğur Yücel, Arabesk paved the way for today's hit Turkish films by surpassing 1 million tickets sold. To make it clear, Turkish cinema finally made it. Soon after, Şerif Gönen's "Amerikalı" (The American) achieved a similar box office success. Although the following films did not fail at the box office, they were unable to set a record.

Director Yavuz Turgul was another prominent name who wrote scripts for a series of comedy productions for Arzu Film in his early professional life.
Apart from his skills in filmmaking, Turgul has significant knowledge in strategies for maximizing box office revenues. He started his career with "Fahriye Abla" (Sister Fahriye), which was adapted to the screen from Ahmet Muhip Dranas's poem with the same title, and crowned his success with "Muhsin Bey" (Mr. Muhsin), which was awarded for best film, best actor and best script at the sixth International Antalya Orange Film Festival. His next awardwinning film, "Eşkiya" (The Bandit) drew 2.5 million viewers in 1997, which was an unprecedented box office success. At those times, American productions were highly popular in Turkey. For the first time, a local production competed with American films and received the highest revenue of all time. Turgul continued to work with the prolific actor, Şener Şen, who starred in the leading role in Eşkıya. In the following years, the two had great accomplishments with "Gönül Yarası" (Lovelorn) and "Av Mevsimi" (Hunting Season), released in 2005 and 2010, respectively.

Local comedy films were the next milestone of Turkish cinema that drew great public interest. Based on a novel by Turkish author Rıfat Ilgaz, "Hababam Sınıfı" (The Chaos Class) was produced by Arzu Film. It was followed by five top-hit sequels. A number of parody films including "Kahpe Bizans" (Perfidious Byzantine) followed the trend for a while. The newly revolutionized Turkish cinema reached the capacity to challenge Hollywood productions thanks to educated directors and technological advancements in the art of motion pictures. Besides, the films did not only address to local Turkish audiences, but were exported to European and Arab countries where the Turkish immigrant population was high. Most of the comedies featured popular TV actors that in turn increased box office success.

When talking about recent Turkish cinema, it appears that Turkish filmmaker, actor and poet Yılmaz Erdoğan received critical acclaim with his role as "Mükremin Abi" (Brother Mükremin) in the ground-breaking TV series "Bir Demet Tiyatro" (A Bunch of Plays). Erdoğan later founded Beşiktaş Cultural Center (BKM) with his colleagues, where musicals and concerts regularly take place. His debut comedy, "Vizontele" (Television) was a box-office record-breaking film. The multi-skilled director made a number of other films including "Organize İşler" (Magic Carpet Ride), "Neşeli Hayat" (Jolly Life) and "Kelebeğin Rüyası" (The Butterfly's Dream) that both satisfied film critics and spectators. "Recep İvedik" was the next comedy that depicts the story of a fearsome-looking young man and was the highest grossing production of 2008. Ironically criticizing social issues, the film had a challenging rival though. Directed and written by famous stand-up comedian Ata Demirer, "Eyvah Eyvah" (Alas Alas) again featured Demirer as Hüseyin, a young and kind-hearted clarinet player. Bear in mind, actress Demet Akbağ's performance as a bar singer named Firuzan allowed the film to gain more success.

Akbağ's next film "Hükümet Kadın" (Stateswoman) by the BKM was among the very popular Turkish comedies. The BKM triumphed with "Düğün Dernek" (Merrymaking), which attracted 6,961,909 viewers. Furthermore, acclaimed stand-up comedian Cem Yılmaz preferred to show his skills in film rather than on TV. He directed a number of popular high grossing films including "G.O.R.A.," "A.R.O.G.," "Hokkabaz" (Magician) and "Yahşi Batı" (Mild West) in collaboration with the BKM. As mentioned, movie theaters suffered greatly from the arrival of TV. However, film adaptations of Turkish TV series such as "Deli Yürek" (Crazy Heart), "Asmalı Konak" (The Mansion with Vines) and "Kurtlar Vadisi" (Valley of the Wolves) had a rejuvenating impact on Turkish film.

Finally, famous singer Mahsun Kırmızıgül inspired other Turkish singers take a stab at movie production. A wellknown arabesque musician, Kırmızıgül brought the masters of Yeşilçam cinema together in his film "Beyaz Melek" (White Angel), which attracted more than 1 million viewers in 2007. Following this, he made progress in Turkish cinema as a director with "Güneşi Gördüm" (I saw the Sun) and "New York'ta Beş Minare" (Five Minarets in New York). Inspired by Kırmızıgül's accomplishment, another Turkish singer, Özcan Deniz, directed "Ya Sonra" (Then What?), which drew great interest. Deniz received good box office receipts with his next films "Evim Sensin" (You are My Home) and "Su ve Ateş" (Water and Fire).

Above all, Turkish cinema has significantly changed over the years. Yeşilçam films were produced with limited budgets. In other words, Turkish films took their shares from Turkey's changing atmosphere. New Turkish cinema must address all without any discrimination. Talented actors, well-written scripts, interesting wits and state-of-the-art technology comprise the main components of today's local productions. Turkish viewers also found what they were looking for, which resulted in happy endings at box office. It appears that Turkish cinema will outscore world cinema including Hollywood films in future.
Last Update: Aug 02, 2014 1:38 am
RELATED TOPICS