Superhero 'Turtles' swing back onto big screen in new mutation 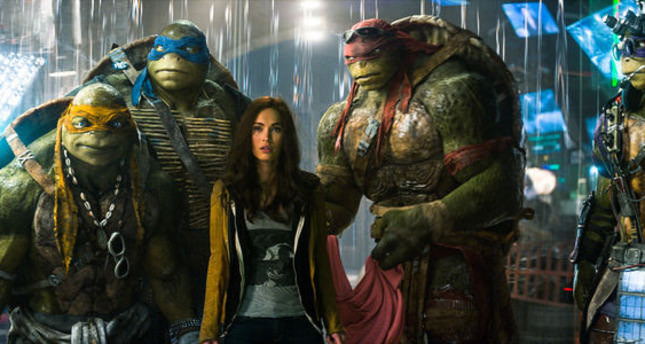 by Aug 08, 2014 12:00 am
The teenage mutant heroes in a half shell are battling their way back to movie screens with teen crushes, insecurity, rage and a hankering for pizza in a franchise reboot for a new generation. "Teenage Mutant Ninja Turtles," based on the 1980s comic book series that led to a television show and then a film in 1990, features four turtle brothers trained as fighters.

In the 2014 version out in U.S. theaters on Friday, the amiable Turtles named after Renaissance artists are brought to life with new performance capture technology. The restless teen Turtles are fighting the criminal Foot Clan as nighttime vigilantes, but as Foot Clan leader Shredder's evil plans threaten to obliterate the population of New York, the Turtles must leave the safety of their sewer lair to save the city. Viacom-owned Paramount Pictures acquired the rights to the "Turtles" in 2009 and relaunched the "Turtles" TV series on Nickelodeon in 2012, bringing in a new youth audience to the characters. The film's budget is estimated at $125 million by IMDB.com, and is projected by BoxOffice.com to earn $39 million in its opening weekend. Reimagining the Turtles was a job entrusted to George Lucas' Industrial Light & Magic (ILM) team, which developed performance capture software to make the superheroes as photo-realistic as possible in the production led by Michael Bay and directed by Jonathan Liebesman.

The four relatively unknown actors that played the Turtles - Noel Fisher (Michelangelo), Pete Ploszek (Leonardo), Jeremy Howard (Donatello) and Alan Ritchson (Raphael) - wore helmets rigged with high-definition cameras capturing every facial movement. "You want to make sure you entertain the individuality of every one of those characters," said Pablo Helman, the ILM visual effects supervisor behind the film. "They're all completely different from each other, but they're brothers and they all feel they don't belong in this world. That's also why they're so big, it's a really good way to say they're too big for the world in which they live in." Megan Fox, best known as the love interest in Bay's "Transformers" films, plays intrepid reporter April O'Neil who becomes a close ally of the Turtles, and the object of Michelangelo's teen infatuation.

The actress called herself a "superfan" of the franchise and said she enjoyed not being a damsel in distress. "(April) never has to be rescued by a man in this movie, she's only rescued by the Turtles," Fox said. "I didn't at any point have to be sexualized in this movie, there's no weird, gratuitous shot, and I think that's the first time I've ever had a part like that." Fox is joined by Will Arnett, who plays Vern Fenwick, April's inept cameraman who has a big crush on her. The actor said he believed the Turtles brought a new superhero message for its audience. "A lot of other superhero movies are about one singular guy, this lone wolf," Arnett said. "This is about these guys together forming one unit, and I think that's what separates it."