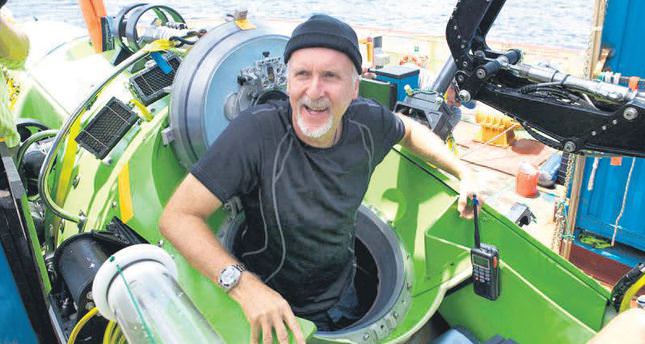 by Aug 11, 2014 12:00 am
Oscar-winning director James Cameron ventured to the farthest reaches of the planet and fulfilled a childhood dream in "Deepsea Challenge 3D," a documentary that follows him on a record-breaking solo dive to the ocean's depths.

Tightly crammed into the tiny capsule of a vertical-diving submarine, the director of Hollywood's highest grossing films, "Avatar" and "Titanic," plunged 35,787 feet (10,908 meters) to the deepest known place on Earth in the Mariana Trench in the Pacific Ocean. "Curiosity is the most important thing in my life," said Cameron, 59, whose team of experts designed and built the equipment to dive to the ocean's depths, photograph its fascinating creatures and gather samples for scientists. "Part of it for me is the excitement of the engineering. Part of it is the excitement of physically going and seeing something that I know no human being has ever seen," he said in New York after a screening of the film that opens in U.S. theaters on Friday.

The dive in 2012 was the culmination of a seven-year project and the realization of a boyhood fantasy. Cameron had been enthralled with exploration since reading about French oceanographer Jacques Cousteau and was also inspired by the historic dive of Lt. Don Walsh of the U.S. Navy and Swiss oceanographer Jacques Piccard half a century earlier.

The 1960 Mariana Trench dive, the first to explore the deepest ocean depths, is depicted in the film. Walsh was also with Cameron as he began his dive.

Cameron admitted being nervous, although once he was bolted into the capsule and the 24-foot-long (7.3 meter-long) submarine was lowered from a ship into the dark, stormy water during the dangerous night dive the overwhelming emotion was excitement. But at one point during the two and a half hour, nearly seven-mile descent Cameron said he thought, "This might be the dumbest idea I have ever had."

Deep sea exploration is a passion for Cameron. He wanted to make the 1997 blockbuster "Titanic," which won 11 Oscars including best director, so he could explore the remains of the luxury ocean liner that sank in 1912. "Deepsea Challenge 3D" follows Cameron and his team in Australia as they test the submarine, which he financed and co-designed, making sure it could withstand the tremendous pressure of the ocean's depths.

The film captures the harrowing test dives and the tragic deaths of two crew members in a helicopter accident that nearly derailed the project. Cameron, who is back on land working on the "Avatar" sequels, spent three hours exploring the ocean floor and hopes to go back. "My ultimate dream is to be able to have a vehicle that is connected by fiber optics to the surface at those depths, so you can come to a place like this and actually watch in real time while we are exploring on the bottom of the ocean. That would be really cool," he said.