Time is the only true unit of measurement 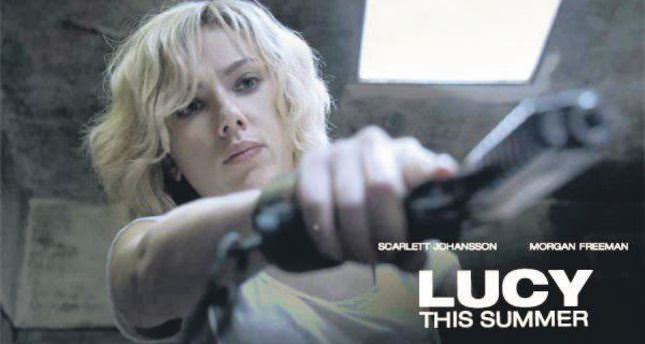 by Özkan Binol Aug 19, 2014 12:00 am
Most of the discussions about the human brain's capacity can sometimes be only loosely described as scientific. Even the assertions about Einstein, who is widely regarded as genius, are no more than urban legends. Another genius, French director Luc Besson, apparently accepts the extraordinary capacity of the human brain, leading him to bring it to the silver screen. Starring Scarlett Johansson in the title role, Lucy is an action thriller about a woman who can access 100 percent of her brain, and turns into a superhuman. Besson's thriller gives you an adrenaline rush during hot summer days with high-tempo action scenes.

Let's begin with a brief summary: the underground world of Taipei city is run by mobs, street gangs and corrupt cops. Lucy (Scarlett Johansson) is tricked into working as a drug mule for a dangerous mob. She is asked to deliver a briefcase containing a valuable drug. The drug is forcibly given to her, and spreads throughout her body. Lucy turns into a superhuman after the chemicals allow her to use supernatural physical and mental skills such as telekinesis. She can choose to feel pain, is able to read other people's minds and move objects with her mind. Lucy swears to take revenge, and acts like the Angel of Vengeance.

When talking about French cinema, Besson always has a special place in my heart. He features love stories, conflicts and loneliness of people with different backgrounds. His films show extraordinary elements, interesting characters and contain a unique sense of humor. He successfully creates impressive female characters still mentioned in world cinema history.

To illustrate, Besson's "La Femme Nikita" depicts a convicted woman (Anne Parilaut) with the same name, who begins working as a topsecret spy for the secret government. Nikita is determined to take revenge. On the other hand, "Leon" presents a very sensitive, vulnerable and desperate female character. Mathilda (Natalie Portman) pushes viewers into a melancholic world with her unconditional love to Leon. Besson's 1997 production "The Fifth Element" astonishes viewers with Leoo (Milla Jovovic), who is sent to Earth in corporeal form containing the final component of a powerful weapon. Leoo keeps a merciless heart under her iron body.

Besson creates an angel in human disguise in his "Angela-A" starred by Rie Rasmussen. A beautiful woman, she spreads hope and love. Besson's imaginary world is apparently surrounded with women reminiscent of the French heroine "Joan of Arc." (who coincidently was portrayed by Jovovic in another production). Lucy is the newest character in his world who is the most different, challenging the previous ones.
While watching the trailer, I thought Besson created another version of Nikita. However, Lucy is more than an action-packed sci-fi film.

After a breathtaking opening, the film changes its route in the following scenes. The more Lucy uses her enhanced mental skills, the more Besson leaves sci-fi philosophy behind to focuses on action scenes similar to gangster films. He tries to make a film like those by Stanley Kubrick, yet Lucy takes its place among other commercial Hollywood films. Lucy is not based on an acceptable scientific base. How much humans use their brain is still a matter of curiosity in our age when science pushes to the limits and advances at a rapid pace.

Unfortunately, Besson confines himself within the borders of the sci-fi and action worlds, rather than existing scientific findings. There are some wise sayings that occur during dialogues between Lucy and Professor Norman (Morgan Freeman) such as, "Time is the only true unit of measurement, it gives proof to the existence of matter. Without time, we don't exist." However, the film is only spitting into the wind. If Besson had exerted more effort, he would have created an interesting film similar to his 1988 production "The Deep Blue," as his creativity is beyond borders.

Apart from the aforementioned confusions, the film features commendable aspects. The rich visual effects and high-action tempo make you forget the time. Lucy incrementally accesses her whole brain, and the gradual changes push the limits of visual creativity. Besson's success lies in positioning Lucy's eyes from the point of viewers, achieving impressive visual effects. Moreover, Taipei and Paris are shown from a well-created cinematographic perspective. Secondary characters like gang members in Taipei and corrupt cops in Paris look convincing. Besson's unique sense of humor is also worth mentioning.

Angelina Jolie was Besson's first choice for the character "Lucy." Johansson later accepted the proposal when Jolie dropped out. She succeeds in her work, and even hits the top with her gestures in certain scenes. We should mention her latest success with others including "Griet" and "Nola Rice." However, the film does not give enough screen time for Freeman and South Korean actor Choi Min-sik, known for his acclaimed role in "Old boy." Undoubtedly, Lucy would have been a more successful film if the two characters were given more time. Above all, Lucy is one of the recent recommendable films with its different story, talented actors and an action-packed atmosphere. To enjoy Johansson's best performance, you may watch "Her," in which she never appears on screen, but attracts viewers with her voice.
Last Update: Aug 19, 2014 2:08 am
RELATED TOPICS