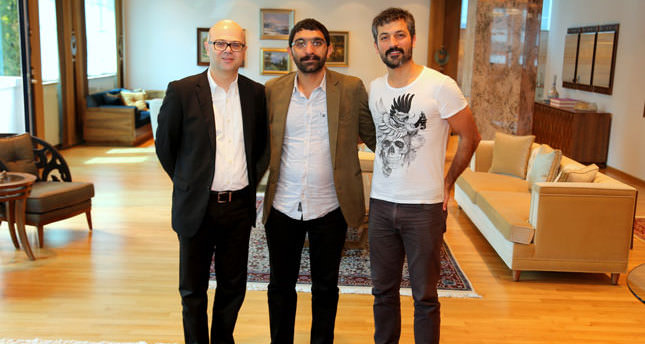 by AA Aug 26, 2014 12:00 am
Erol Mintaş and leading actor Feyyaz Duman of "Song of My Mother," which won the "Best Male Actor" and "Best Film" awards at the 20th Sarajevo Film Festival, visited Turkey's Sarajevo ambassador Cihad Erginay at the Embassy. Ambassador Erginay congratulated the film crew who won two awards at the Festival, one of the most important film festivals in Europe.

Erginay stated that he is thankful to all the Turkish films that attended the festival. He reminded that many guests from film industry came to Sarajevo for the Festival. Moreover, he highlighted that Turkey's biggest foundations and institutions sponsored this significant organization.

Erginay stated "Song of My Mother" crowned the Turkey's presence in the festival by wining the "Best Film" and "Best Male Actor" awards. He also thanked the film crew for introducing such a beautiful film. He stated that most of the audience was moved by the film. They said "Song of My Mother" draws attention to important issues, and noted that the film successfully studies the relationship between a mother and her son. "The film crew nicely studied and presented our traditions, customs and family ties. They successfully achieved telling our story to audience from other nations. This is a beautiful film. I congratulate them all," said Erginay. Erginay reminded this year marks the 100th anniversary of Turkish cinema.
He added that it is a great honor to achieve this success on the 100th anniversary of Turkish cinema.

The film's director Erol Mintaş stated they did not expect to win any award. "It is pleasing to receive awards by this jury, and return to Turkey with two awards," said Mintaş. He stated that the most difficult task was to find someone for the role of the mother. "For the mother's role, we carried out castings directly on the streets, and reached out to many mothers. Zübeyde Rohani is actually my friend's mother. One day, she came to Bilgi University as a speaker. I loved her when I saw her beautiful eyes, so I talked to her. Although my friend tried to help, his mother did not accept the role at first. "I will not do such a thing at this age," she said. We kept in touch for almost two years. I told her that the film would not have happened if she had not agreed with me. At the end, I involved every family member in the film. When she received permission and the blessing from the eldest of the family, she became the mother," Mintaş said.

He further added they will start a project together as soon as possible. Feyyaz Duman who won the award for "Best Male Actor" said it is good to receive recognition for their work. He said that he wants everybody to watch the film, and noted "Song of My Mother" should not be put on the shelves labeled as a festival film. Duman further reminded that Rohani who plays the mother role is not a professional actress but she acts more professionally than other actors in the film. He concluded, "The mother role contributes to the film big time. If she had not played the role, it would have been impossible to win all these awards. Although she never went to school, she can read and write in both Turkish and Kurdish. It was a great achievement for her to memorize the script and act without having any experience in front of the camera."
Last Update: Aug 26, 2014 9:27 am
RELATED TOPICS