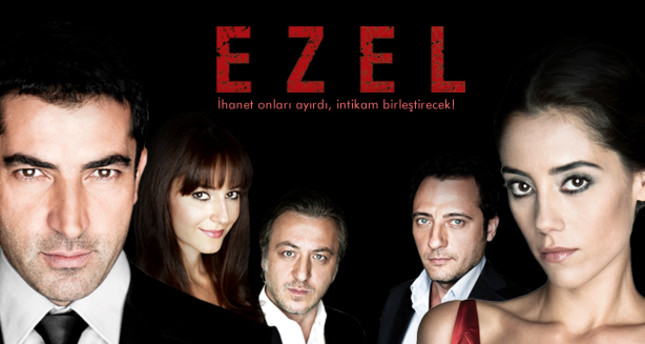 Last year, Turkey earned more than $150 million from the export of TV series, according to a report, 'The World's Most Colorful Screen: TV Series Industry in Turkey' released on Tuesday

The export revenue of TV series, which was a meager $10 million in 2008, has experienced approximately 70 percent annual growth in the past five years. The study demonstrates interesting findings on Turkey's TV series industry, viewing habits, turnovers of production companies and the contribution of TV series to the economy. According to the report, Turkish audiences currently watch 3.9 hours of television per day - slightly lower than the 4.4 hours in 2008, but still higher than the average 3.5 hours that audiences watch in Organization for Economic Co-operation and Development (OECD) countries.

Although there has been 30 percent annual growth in digital advertisement investments since 2009, media investments show 58 percent growth, suggesting that TV channels are largely preferred. TV series and their re-run episodes come first with 62.5 percent among the programs screened in primetime between 2013 and 2014. Additionally, viewers mostly enjoy watching romance TV series. Game shows and entertainment programs come second with 17 percent in the primetime TV list. The study found that 60 percent of Turkish TV series take between 120 and 180 minutes. Compared to developed countries, there are only a few TV programs less than 60 minutes in Turkey. The company asserts that the duration of TV programs will not lessen in the near future due to TV advertisements, which are an important income resource.

A significant part of this amount is paid to actors. The share of famous actors' expenses in big TV productions might reach up to 45 percent. Due to the increase in quality and popularity, each TV series episode can be sold for up to $200,000, compared to only $500 per episode in previous years. The total export revenue of Turkish TV series to Arab and Balkan countries was $10,000 in 2008, while the amount increased 15 times in recent years due to cultural similarities and geographical closeness. Also, the rising acclaim of Turkish TV series boosts public interest in Turkey. People searching for Turkey on Internet search engines doubled between 2011 and 2013.

The report suggests that the interest in TV series will rise as long as Turkish producers maintain their recent success in quality of filming, montage and cast. It says: "The lack of government incentives, high competition and newly developing Internet networks, which are considered a potential selling medium apart from traditional TV channels, are the biggest handicap for the sustainability of production companies. Producers presently continue their projects with the revenues from successful Turkish TV series sold to foreign countries. There is admittedly high competition between companies. Some of them that are unable to balance income and expenses manage cash flow and select suitable projects to exert more effort to manage possible risks in an environment with a high rate of failure."

Deloitte Turkey's partner and head of technology, media and telecommunications department Tolga Yaveroğlu said they conducted the study on Turkish TV series to provide necessary data to relevant stakeholders and present suggestions on how to increase competitiveness in foreign markets. The study also analyzes the main problems of new TV series, most of which stopped broadcasting before the end of the season. Manager Özen Demircan at Deloitte Turkey added that half of almost 70 new series that are aired each season stop broadcasting due to high competition. Considering the last four broadcasting seasons, 22 percent of new series were cancelled within the first six episodes, and 29 percent of others were stopped within the first seven or 12 episodes. "The rate of Turkish TV series that stop broadcasting very early increases due to high competition.
Viewers do not enjoy watching TV series without high quality montage and a professional cast. Production companies do not continue to broadcast primetime TV series with lower rating records to avoid a decrease in TV channels general performance.
Last Update: Aug 28, 2014 1:57 am
RELATED TOPICS