'Evliya Çelebi: The Fountain of Youth' to open in October 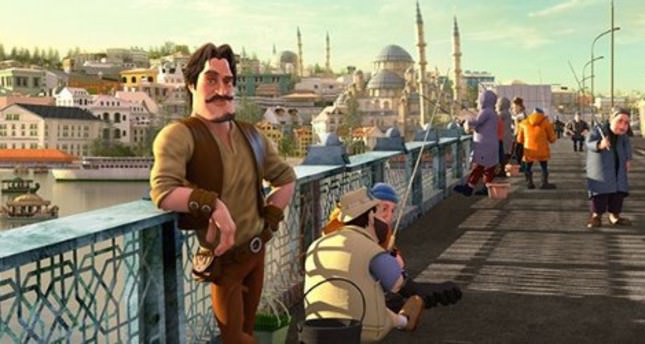 by AA Sep 02, 2014 12:00 am
The first Turkish 3D animated film "Evliya Çelebi:The Fountain of Youth" will come to the big screen on Oct. 24 in the U.S., Europe, the Middle East and Turkey. The film featuring famous Ottoman wanderer Evliya Çelebi will compete in the same category with Hollywood blockbusters such as the "Ice Age" series and "Frozen."

Sponsored by the Prime Ministry Promotion Fund, Ministry of Culture and Tourism and Turkish Airlines (THY), the animation film will be introduced to moviegoers with the contribution of famous Turkish voice artists. The film is directed by Serkan Zelzele and produced by Alper Özdemir.

Haluk Bilginer will give his voice to leading character Evliya Çelebi along with Ahmet Kural and Murat Cemcir's vocal performances. Recognized as the "Man of the Year" in 2011 by UNESCO, Evliya Çelebi was also listed in Council of Europe's "People who Built Bridges between Cultures in the History of Mankind." Inspired by the unique life and adventures of Evliya Çelebi, the film will be promoted throughout the world.

Speaking to Anadolu Agency (AA), Özdemir said they worked on the film for the past three years, and added that the screening date is very important for the project. He believed the film will be important to create a local hero in Turkish cinema. He stated that they are working on a mobile game along with a social media application. He further stated that Evliya Çelebi will also be made into a T.V series. The places and the character designs of the film were created in 3D and the film cost $4 million (TL 8.64 million) in total.

The film crew does not only want to create a local hero but also a TV character that will draw everyone's attention.

According to Özdemir, Turkey lacks such projects, and said, "When we say that the film is about Evliya Çelebi, people tend to think the film only tells history. Actually, we are telling the story of today's Istanbul. Evliya Çelebi's "Seyahatname" (Book of Travels) is spread across 10 volumes and the last volume ends with the phrase: "What is ever-lasting remains forever."

There are various rumors about Evliya Çelebi among locals since there is no knowledge about when, where and how he died. As he has no grave, it is believed that he found the fountain of immortality and drank from it to travel more; the film is inspired by this rumor.

Özdemir stated that the film starts with a story around the Nile, adding, "For this film, Karaköy, Eminönü, Sirkeci, Sultanahmet and the entire historical peninsula were modeled for 3D animation. 500 people worked on this project for three years." Özdemir said animation films contain more than what we merely see on screen. When a character is created and the film debuts, it is followed by games, songs and applications. "We are talking about an entire production process.

We do not only want to project the film on a screen. We are trying to create a Turkish hero who is known worldwide,"

Özdemir said. He also pointed out that Hollywood carries out successful productions such as "Ice Age" and "Frozen," and their film does not lag behind those projects. He said that he believes the film will attract many people. Besides the mobile game and social media app featuring Evliya Çelebi, producer Özdemir said that toys and stationary accessories will be launched following the premier.