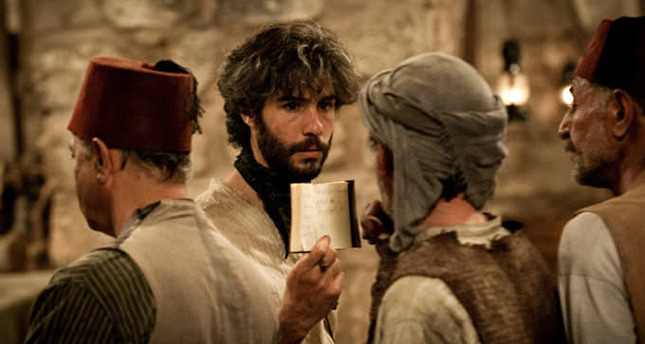 by Kaya Genç Sep 06, 2014 12:00 am
I never expected Fatih Akın to make a big budget film about a taboo political subject. A German film director of Turkish descent, Akın's 20-year-long film career provided examples of his Terry Gilliam-like imagination, as well as his acute interest in love affairs between passionate individuals. When I read Guardian critic Peter Bradshaw's review of his new film "The Cut" ("a heartfelt, if soapy Zhivago-ish quest epic") I remembered those first impressions. To me, love and passion are Akın's areas of expertise. His film scripts, cinematography and even the performances he manages to extract from his actors, all take their power from Akın's continuous focus on passionate feelings and on love.

Despite its strong engagement with a big political subject, "The Cut" is also a typical Akın film, perhaps a composite of his previous work. It tells the story of Nazaret Manugyan, a blacksmith from Mardin, who is forced to leave his hometown in 1915 when members of the Committee of Union and Progress executed a plan to deport all Ottoman Armenians from the empire. Manugyan, played by Tahar Rahim of "A Prophet" fame, travels to Aleppo, Beirut, Cuba, Florida and Minnesota; in the second half of the film he struggles to find his daughters.
Some critics took issue with the soapy tone of "The Cut," as well as its linguistic choices (Armenian characters speak English in the film; the rest of the cast speak in their own tongues). Nevertheless, the film, which competes for the Golden Lion at Venice Film Festival, is a testament to the scope and ambition of Akın's film career.

Born in 1973 to Turkish parents, Akın entered Hamburg's prestigious Hochschule für bildende Künste at the age of 21 and studied in the visual communication department.While at school, he started working for the Hamburg- based film company, Wüste. Famous for its German-
Turkish films, including Buket Alakus's "Anam" and Anno Saul's Kebab Connection," the company served as an artistic home to up and coming filmmakers on the lookout for work experience.

Hochschule für bildende Künste's faculty included the eminent film director Wim Wenders. In 2005, only five years after Akın's graduation, the German magazine Der Spiegel described how "the German film industry has been collectively holding its breath to see if Fatih Akın would turn out to be the next Wim Wenders." Deutsche Welle was equally excited about the rise of this new filmmaker: "After Wim Wenders and Tom Tykwer, Fatih Akin ranks as the third most well-known film director in Germany," it announced.

Although he owed this fame to "Head On" (2004), which won him the Golden Bear at the Berlin Film Festival, Akın had already made a name for himself with "In July" (2000), a road movie that perfectly exemplifies the earlier Akın. He cast Moritz Bleibtreu as Daniel, a young teacher who buys a Mayan ring from a girl at the flea market before finding himself on the road the following day, struggling to find "a girl with a sun."

Bleibtreu also acted in Akın's 2002 film "Solino," about an Italian family who opened the first pizza restaurant in the northwestern German city Duisburg. The peace of their family life is unsettled when two brothers fall in love with the same girl. This "family epic" was released at a time when other Turkish directors, like Ferzan Özpetek, were producing enjoyable art-house hits, much to the delight of European audiences.

For his next projects Akın chose to deal with more difficult and politically loaded subjects, including immigration, cultural alienation and the oppressive role of the family. Cahit, the 40-something protagonist of "Head On" deals with his German existence and Turkish past in a violent and yet inspiring manner. Born in Mersin, he leads a destructive life in Hamburg where he meets and falls in love with Sibel who experiences immense pressure from her Turkish family.

At the opening of the film, Cahit and Sibel have both attempted suicide. Later they travel to Istanbul, stay at the Grand Hotel de Londres in Beyoglu and begin new lives.The realism of "Head On" continued with Akın's similarly acclaimed film, "Crossing the Bridge: The Sound of Istanbul," which showed his gifts as a documentary filmmaker.

The film unsettled many of the European (and more particularly, German) assumptions about Turkey's "inherent backwardness" as a predominantly Muslim country. Akın showed how different cultures coexisted in the country, where artists shared a sense of alienation from the centurylong policies of state-imposed uniformity. Istanbul was as exciting as Berlin, even if German conservatives chose to believe otherwise. I still remember the Istanbul premiere of Akın's 2009 film, "Soul Kitchen," a comedy about a shabby Greek restaurant frequented by some of the city's most interesting characters. I was surprised to see him employ a much lighter tone. But Akın had also started to be more outspoken about politics. He boycotted the Swiss premiere of "Soul Kitchen" to protest the country's referendum vote to ban the construction of minarets. When asked to explain the reason behind his protest, Akın said the ban contradicted his belief in the "harmonious co-existence of peoples." It will be interesting to see Akın's cinematic search for harmony in his film career that increasingly focuses on the more political and tragic aspects of our existence.