Ben Affleck: A Hero of Our Time 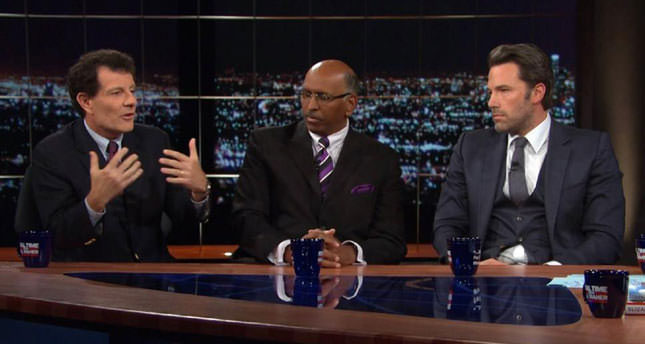 Ben Affleck’s heated discussion with TV host Bill Maher last week was a good example of the courage and open-mindedness of the American actor. Affleck’s interest in exploring new ideas drives his film career as well as his captivating performance in ‘Gone Girl,’ his latest film which was released in Turkey this week

American TV host Bill Maher doesn't like religions in general. There is nothing wrong with being unreligious and he is perfectly entitled to his opinion. But there is something wrong with Maher saying that all religions are not equal, since this is the point where his anti-religious views become problematic for members of his least-favourite religion. "We are liberals, and we are liberals on almost every issue, but not the Muslim issue," Maher said on his HBO show "Real Time" back in 2012.

Noting that besides Islam "there is no other religion that is asking for the death" of people who dare to criticize it, Maher said: "Let's define where we are different than the mainstream liberals because I have routinely gotten booed here on the show sometimes, on my stand-up act, when I say, and liberals hate to hear this, that all religions are not alike. When you say that, they think that you're a bigot and we're not a bigot."

Replacing words "Muslim" and "Islam" with words that define other religions would suffice to earn Maher a reputation as a bigot. But when it is Islam, rather than other religions, that is singled out, this is seen as perfectly normal. Such statements are part of a rising trend to which the film actor Ben Affleck gave a very public reaction last week, on the same TV program.

American conservatives like Rand Paul have been using similar arguments to voice anti-black and racist views. Last week The New Yorker magazine quoted one of Paul's racist articles which features the following passage: "We are constantly told that it is evil to be afraid of black men but it is hardly irrational. Black men commit murders, rapes, robberies, muggings and burglaries all out of proportion to their numbers..."

According to this line of reasoning, if statistics and science support bigoted ideas, such as "Jews are an inferior race," or "most black men are rapists," then one can happily become an anti-semite or racist.

The New Yorker piece quotes another article where Paul argues that black males in Washington are mostly semi-criminal or entirely criminal, before concluding that "only about 5 percent of blacks have sensible political opinions." Again, relying on statistics gathered from field studies is supposed to make those bigoted views less bigoted and convince us that those are merely scientific statements.

While responding to Maher and author Sam Harris, who called Islam "the motherload of bad ideas" on HBO, Ben Affleck wisely referred to the anti-black strain of those arguments. "Your argument is, 'You know, black people, they shoot each other,' " Affleck said. "It's gross.

It's racist. It's like saying 'shifty Jew...' It's stereotyping."

In David Fincher's new film, "Gone Girl," Affleck plays Nick, a journalist who loses his job during the recession, and opens a bar using his wife Amy's savings. When he returns home on the day of their fifth wedding anniversary, Nick finds that Amy is missing. During the following media craze he appears as a very untrustworthy figure. People suspect that he is a sociopath who may be responsible for the murder of his wife. Gillian Flynn, who authored the novel and adapted it to film, uses unreliable narrators to great effect, leaving us constantly unsure about whether we should trust Nick or see him as a coldblooded murderer.

His latest TV debate with Maher perhaps similarly unsettled American audiences who have been watching Affleck since he began acting at the age of seven. In his 35-year-long career Affleck starred in a wide range of films, including indie productions like "Chasing Amy" and "Dogma" and blockbusters like "Armageddon" and "Pearl Harbor." But perhaps Affleck's best films are those that stand in between those categories - films like "The Town," "Argo" and "Good Will Hunting" that can be described as independent-minded mainstream films.

"I grew up in a house with a mother who was a teacher and a Freedom Rider - very left-wing Democrats living in a heterogeneous working-class neighborhood," Affleck told the Playboy magazine earlier this year. "I picked up a lot of those values there, and I brought them with me when I showed up in Hollywood."

As a democrat, Affleck has been an admirer of the proud legacy of the fight against McCarthyism. The Hollywood blacklists between 1946-1957 meant that certain actors, scriptwriters and directors could not be employed in the entertainment industry because of their political associations or beliefs. It was bigotry on a massive scale, which had the noble aim of defeating "enemies of liberty."

So what does this latest HBO debate show us? Among other things, it may prove the actor's credentials as a true liberal. We can even imagine Affleck rephrase Maher's sentence and say: "We are liberals, and we are liberals on almost every issue, including the Muslim issue."