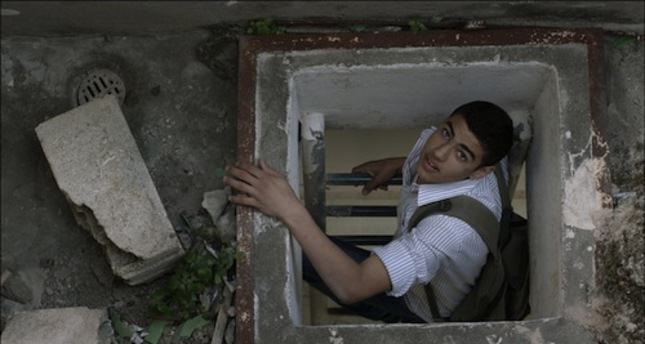 by AA
Nov 05, 2014 12:00 am
The fourth International Çanakkale Biennial held from Sept. 27 to Nov. 2 screened "Letter to a Refusing Pilot," a short film by Lebanese artist Akram Zaatari, which depicts a rumor certered around Zaatari's hometown of Saida during the Israeli invasion in 1982. The film recounts the story of an Israeli fighter pilot who was ordered to bomb a school there, but refused to obey the order and dumped his bombs into the sea. Deniz Erbaş, the curator of the biennial, spoke to Anadolu Agency and said that the exhibition hall at the entrance of the Korfmann Library was turned into a small movie hall to screen Zaatari's 34-minute film, which is rendered in Arabic and Hebrew. "Zaatari is a Lebanese photographer who is working on a visual archive of the Middle East. Inspired by his own experiences, he analyzes the recent history of Lebanon and the Middle East," she said. When the fighter pilot disobeyed the order, another Israeli pilot bombed the school. "As a Lebanese artist, Zaatari created a film that covers his autobiography rendered in a docu-poetic structure," Erbaş added. The short film shows the past and present of the school with an emphasis on the students' psychology and Zaatari's family story. The film was shot in the neighborhood where the school is located. After the bombardment, the school was rebuilt and Zaatari found the fighter pilot, Hagai Tamir, in Rome. Tamir, who previously studied architecture, realized that the building must be used as school or hospital and refused to bomb it. "Based on a historical account about the war and conflict even witnessed in the Middle East today, the film underscores the significance of humanistic values rather than creating hostility," Erbaş said.