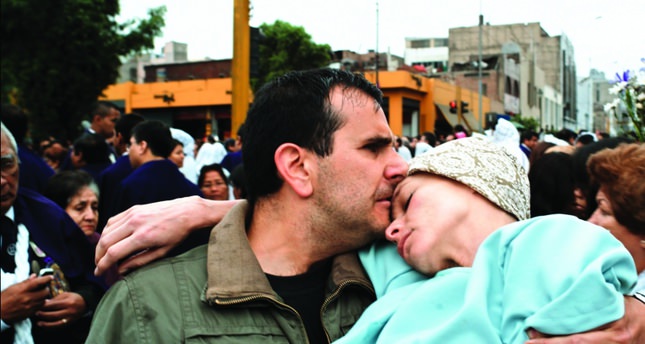 by daily sabah
Nov 06, 2014 12:00 am
This month, the Akbank Sanat film sessions will screen prestigious examples from Peru's emerging cinema scene. In collaboration with the Embassy of Peru in Turkey, the Commercial Attaché of Peru and the Istanbul Cervantes Institute, the free event will be a great opportunity for film enthusiasts to become familiar with the film industries of different cultures while discovering new actors and directors. All films will be screened in Spanish with Turkish subtitles. The film sessions will screen the 2013 production "El Evangelio de la Carne" (The Gospel of the Flesh), which depicts the complicated socio-economic and financial portrait of Lima, Peru's capital, on Nov. 8, and Peruvian director Alejandro Rossi's "Coliseo" (The Champions) that depicts the story of young people who try to cancel the eviction from their tent theater on Nov. 15. Additionally, "El Premio" (The Prize) will be screened on Nov. 22. The film focuses on a humble village teacher who meets his long-lost son many years later. Lastly, on Nov. 29, "Una Sombra al Frente" (Crossing a Shadow), which portrays a period from the perspective of a Peruvian civil engineer, will be screened.

'El Evangelio De La Carne'
(The Gospel of the Flesh)

Three lives in search of redemption intersect on the streets of Lima - an undercover police officer, Gamarra, who desperately tries to save his wife from a terminal illness but gets into trouble; a bus driver, Felix, who wants to be accepted into a religious sect after his involvement in a tragic traffic accident and a football club president, Narciso, who gets into trouble while trying to secure his younger brother's release from prison. The film presents Lima's complicated life both socially and economically.

It is the peak of the life of highway engineer Enrique Aet who builds roads to connect the inaccessible areas of Peru's Amazon rainforest. Encouraged by the positive spirit that dominated Peru in the beginning of 20th century, Aet will encounter unparalleled emotional distress and family drama when he returns to Lima, however.

A humble village teacher travels to Lima to collect the money that he won in the lottery and meets his long-lost son. However, they have no idea how this meeting will change their lives.

A tent theater, which has become legendary with the folk shows it presents, is on the verge of closure. Knowing the closure will cause many artists from different generations to fade away, a group of young people form a dance group and join the National Huaylarsh Dance Contest to save the theater.