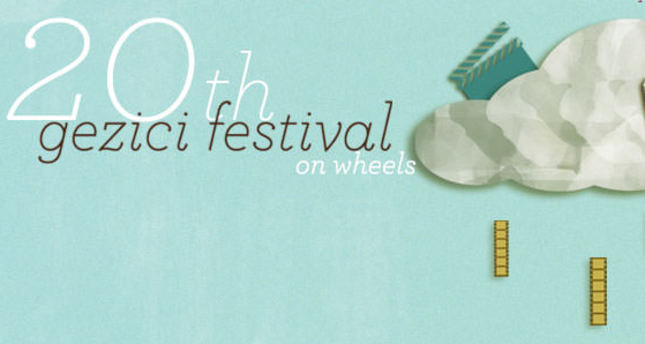 The Festival on Wheels, which hit the road in 1995 for the first time, will once again entertain audiences from Nov. 28 to Dec. 8, departing from Ankara as per tradition

The mission of the festival is to present distinguished examples of cinema to movie buffs in different cities across Turkey and to introduce Turkish cinema to the world. The festival has been on the road for 20 years travelling to five countries, 23 cities and 56,872 kilometers in total. The Festival on Wheels, which has brought Turkish cinema classics together with film enthusiasts since 1995, will offer many surprises to its audience as it marks its 20th anniversary. Standing out with its classical sections as well as special guests, the event will host Turkish author, short-story writer, playwright and poet, Murathan Mungan, this year.

The organization that previously screened films chosen by Zeki Demirkubuz, Tuncel Kurtiz and Barış Bıçakçı will offer Mungan's exclusive selection under the title "Three Doors Opening on Reality." Mungan, who wrote on cinema, questions our relationship with reality through the medium of film. The selection is a thinking exercise about the perception and nature of reality as well as the general state of being human. Moreover, it is an invitation by a cinema enthusiast and film author to a real cinematic experience.

Within the scope of Mungan's selection, the theme of "What Do We Want to See in a Photograph?" will be illustrated by Michelangelo Antonioni's 1966 film, "Blow Up." The film recounts the story of Thomas, a well-known and wealthy fashion photographer, and his connection to a mysterious murder case. When he zooms in to a photograph that he has taken by chance in a park, he sees a man with a gun and a dead body. As soon as he realizes he has witnessed a murder, he tries to prove it. Regarded as one of the most original films of the 1960s, "Blow Up" questions reality and the perception of reality in the background.

Illustrating the theme "What Do We Want to Hear?" will be Francis Ford Coppola's film "The Conversation" (1974). The film, which helped the director win the Palme d'Or the same year, stands out as one of the renowned director's most striking films. The film focuses on the obsessive personality and complicated inner world of private detective Harry Caul, who carries out surveillance with his high technology tools. When he is assigned to follow a young couple, Harry gets too involved, is affected by the sound recordings of the couple and becomes paranoid.

"Rashomon" (1950) by Akira Kurosaw emphasizes the relativity of reality with its plot focusing on the weaknesses of mankind. Set in 12th century Japan, the film questions reality through a man who is killed while walking in the forest with his wife, the subsequent rape of his and the conflicting stories told by witnesses. The film will be screened under the title "Which Story Do We Want to Believe In?"