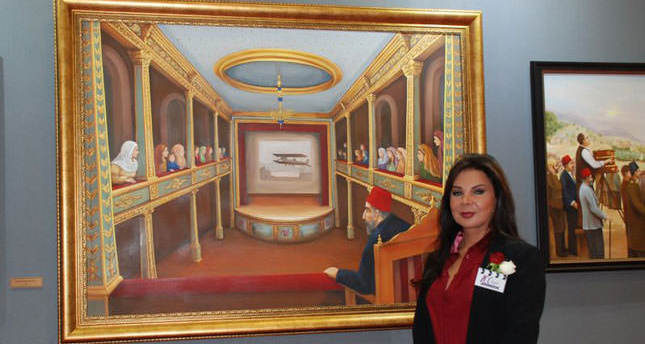 by AA Nov 12, 2014 12:00 am
Turkish actress Neşe Aksoy has opened her solo exhibition "11 Tablo ile Türk Sinema Tarihi" (The History of Turkish Cinema with 11 Paintings) at the 33rd edition of the TÜYAP International Istanbul Book Fair, which is dedicated to the centennial anniversary of Turkish cinema. Her paintings are currently on display at the exhibition's "Turkish Cinema" section.

"Aside from acting, I wanted to contribute to Turkish cinema through my paintings. I started preparations three years ago for my exhibition that brings together cinema and painting under the same roof. I researched a lot, worked very hard and it was a long and tiring task," Aksoy said, adding, "I paid special attention to select subjects for my paintings."

Aksoy also compared the interesting occurrences in the Turkish film industry with the firsts in the history of Turkish cinema such as the first Turkish film, "Ayastefanos'taki Rus Abidesi'nin Yıkılışı" (The Fall of the Russian Monument in Ayastefanos), which was released in 1914. Aksoy also created a painting of "Grandmother Despina," directed by the Manaki brothers. "Some film professionals and historians say this film is the beginning of Turkish cinema."

Aksoy also scrutinized photographs of the theatre hall at the Yıldız Palace to create another one of her paintings. During her research, she found that Turkish journalist and author Sedat Simavi wrote and directed two films, "Pençe" (Claw) and "Casus" (Spy) at the age of 20.

Another of Aksoy's paintings features "Himmet Ağa'nın İzdivacı" (The Marriage of Himmet Agha), which was first directed by Sigmund Weinberg, but its filming was interrupted by World War I; the film was later completed by Fuat Uzkınay.

Her exhibition also depicts "Mürebbiye" (Teacher), which is Turkey's first censored film. "Turkish cinema is like my family and I wanted to highlight it through my works," Aksoy said.