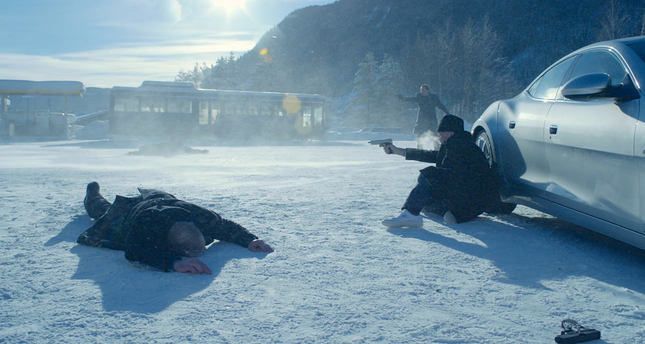 by daily sabah
Nov 28, 2014 12:00 am
Istanbul Modern Cinema, in collaboration with the Norwegian Embassy, will screen the latest examples of Norwegian cinema that have been acclaimed and awarded at film festivals during "Norwegian Film Day." Some of the notable films that will be screened from Dec. 4-7 include "Blind," which won the Golden Tulip Award at this year's Istanbul Film Festival, Hans Petter Moland's "Kraftidioten" (In Order of Disappearance) - which competed for the Golden Bear at the Berlin International Film Festival - and Gunhild Westhagen Magnor's "Optimistene" (The Optimists).

Snowplow driver Nils, who was granted the "Citizen of the Year" award in Norway, begins a tireless search to find the suspects of his son's murder as soon as he is informed that his son overdosed. His investigations lead him to a Norwegian sociopath mafia boss and his Serbian rivals, and he finds himself in the middle of gang wars in order to take his revenge. This black comedy action film, which is set in the freezing Norwegian winter, premiered at this year's Berlin International Film Festival.

The writer couple, Katherine and Thomas, goes on a holiday to an island located on the western coast of Norway. Katherine wants to finish her book while Thomas wants to have a child. When an argument breaks out between them regarding this conflict, Thomas hits his head and loses his memory. Katherine, seeing this incident as a valuable opportunity, does everything she can to make a fresh start. Dominated by suspense, "Amnesia" questions how easily people can adjust to the shifting dynamics of their relationships and continue with their lives as if nothing happened.

Ingrid, an author who has lost her eyesight, locks herself in her home - the only place where she can be alone with her thoughts and feels safe from her husband. Although she remembers the world that surrounds her, the images in her recollection start slowly fading away and she drifts between dreams and reality in her inner world. The black comedy, which depicts how our fantasies and desires influence the way we perceive the world around us, premiered at the 2014 Sundance Film Festival.

A volleyball team composed of women between ages 66 and 98 plans to return to the game for their first match after 30 years. Their rival is a Swedish team of retired gentlemen. Their strategy for victory is easy: Plenty of laughter, regular training and friendship. The documentary film is about aging women who are full of life despite their age and health conditions and are on the journey to victory. "Optimistene'" won the Audience Award at the 2013 Norwegian International Film Festival.

A team of eight people composed of British actors and a director travel to the northern costs of Norway to adapt Henrik Ibsen's play "The Lady from The Sea" to the silver screen. Their project, which seems easy in the beginning, turns into a merciless struggle surrounded by Norway's never-ending sunlight and surreal landscape. The problems, misunderstandings and moments of excitement that they encounter during filming result in a masterpiece that becomes a turning point for everyone's career.