Foreigners of the Oscars screened at Istanbul Modern 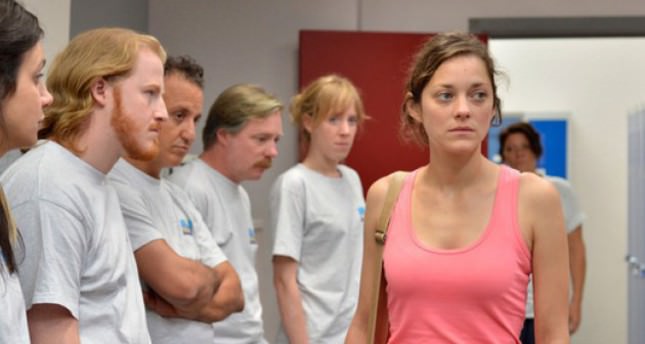 Istanbul Modern Cinema presents ‘The Foreigners of the Oscars,’ a selection of films that stand out among the nominees at the 87th Academy Awards for Best Foreign Language Film from Jan. 8-18 in anticipation of the Academy Awards ceremony. The 12 films featured in the program represent an Academy Award category that brings together films from different cultures and languages. Although these films have caused a stir at film festivals around the world, they are outside the mainstream Hollywood track despite being nominated for an Oscar

Marking its 87th anniversary this year, the Academy Awards receives films from 83 countries, however, only nine films make the nomination list. "The Foreigners of the Oscars" program will feature the Georgian entry "Corn Island" (Simindis Kundzuli) starring İlyas Salman, Ruben Östlund's "Force Majeure" from Sweden, which won the Jury Prize in the "Un Certain Regard" section at the 2014 Cannes Film Festival, "Leviathan" - which won the award for "Best Screenplay" at the 2014 Cannes Film Festival and whose director, Andrey Zvyagintsev, won the Golden Lion in 2003 with his film "The Return" - and Mauritania's entry, "Timbuktu," about the silent resistance and the latest film by Abderrahmane Sissako, one of the most renowned filmmakers of African cinema.

Diane, a divorced single mother, tries to provide for her teenage son, Steve, who suffers from Attention Deficit Hyperactivity Disorder (ADHD). When Diane and Steve meet their new neighbor, Kyle, their lives, which are dominated by the paradox of violence as well as affection, will change forever. Written and directed by Frenchman Xavier Dolan, the modern melodrama was granted the Jury Prize at the 2014 Cannes Film Festival.

This Belgian film centers on Sandra, a 30-year-old woman who recently suffered a nervous breakdown. She learns that if her co-workers do not cover her shifts, their employer will give them bonuses. As most of the workers are excited about the extra money, Sandra and her husband have only one week to persuade her co-workers otherwise. The Dardenne brothers present a drama through the lens of a career struggle and conflicting moral values in their latest film.

The Rovelli family is on the verge of bankruptcy when they cross the wealthy Bernaschi Family in a traffic accident. The director demonstrates the effects of the accident using three different points of view to addresses the issue of how, in a capitalist system, desire, greed, and social status set human values. Blending criticism of class division and the mystery of a murder, the film won awards at all the festivals in which it was screened

Hirut, 14, lives near Addis Ababa and is kidnapped as she is returning from school. As the practice of abducting a woman and forcing her into marriage is one of Ethiopia's oldest traditions, the girl is supposed to marry a man that she does not even know. One day, she escapes from captivity and kills her husband to-be with a rifle. A powerful attorney, Meaza Ashenafi, will do everything he can to prove that the girl acted in self-defense. Inspired by true stories, the film is about the rocky road a community must traverse when they must adapt their traditions to the modern world.

The film, set in Poland in 1962, centers on Anna, an orphaned girl who is preparing to become a nun. Before she takes her final vows, she learns that she still has a living relative. When she pays a visit to this long-lost relative, she is shocked to learn that she is Jewish and her real name is Ida. During the time they spend together, she will discover many other secrets about her roots and will be forced to choose between her true identity and the religion that saved her life during the Nazi occupation. "Ida," which was one of the surprises of 2014, will leave a mark on the souls of the viewers with its narration and the feeling it conveys.

Kolya, a car mechanic, lives in a town on the shore of the Barents Sea in Northern Russia. One day, the mayor of the town offers to buy all of Kolya's properties including his shop, house and land. However, Kolya does not want to leave everything behind or his homeland content with the corrupt system. Inspired by the Book of Job, "Leviathan," which won the award for "Best Film Script" at the 2014 Cannes Film Festival, recounts a story of a man who stands against an authoritarian regime.

Governed by fundamentalists, Timbuktu is a town where oppression and restrictions rule. Away from this chaotic environment, Kidane maintains a quiet life with his family. However, an accidental murder changes their lives and Kidane will have to face the deadly laws of a fascist regime. Directed by Abderrahmane Sissako, one of the prominent figures of African cinema, the film reveals the silent resistance of people who are made to live under sharia law.

An elderly farmer and his granddaughter live on an island that forms a natural border between Georgia and Abkhazia, and earn their living by growing corn on their field. A wounded soldier hiding in the cornfields will both change the lives of the two islanders and put them in jeopardy, even though they have been able to preserve their neutrality for years. Starring acclaimed Turkish actor İlyas Salman as the elderly farmer, this psychological drama centers on the harmony between man and nature.

Simo, who is a fragile and vulnerable young boy, only has one day that he can spend with his big brother before his long time protector goes to jail. They spend the day together on the streets of Helsinki where they will witness incidents that they had never encountered before. Simo's perception of life will change and he will become aware of his true identity. Set in one of the city's suburbs, the film creates a poetic atmosphere through its black-and-white cinematography and three-act structure.