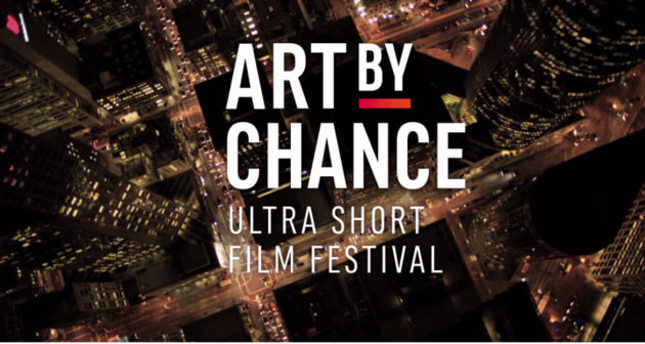 Are you ready to bump into a short film suddenly? Held for the fifth time this year, the Art by Chance Ultra Short Film Festival, one of the world’s largest public art events, invites you to include films into your daily lives

The Art by Chance Ultra Short Film Festival, which will take place simultaneously in 200 cities across 20 different countries, takes films out of the theater halls and brings them to digital screens placed on streets, in subways, buses, trains, ferries, shopping malls, gyms, cafes, museums, art centers and airports.

From Jan. 15 to Feb. 15, 20 countries, including Turkey, will host arguably the most interesting short film festival to ever take place. Sponsored by Turkish Airlines, the Art by Chance Ultra Short Film Festival will screen 30-seconds-long ultra-short films on big screens for a month in 200 cities worldwide. However, what makes this festival different, is that it will not take place in cinema halls, but rather on the average street corner. Art by Chance grabs the attention of city residents unexpectedly during their daily lives, with the intention of breaking the routines of metropolitan residents with a colorful art festival. Turning streets into art venues, the festival converts the art of motion picture into street art. Chosen among "The Coolest 20 Festivals of the Year" by MovieMaker Magazine, Art by Chance has been organized by ANBEAN for the last five years.

The films featured in the festival were chosen among hundreds of applications from 35 countries by an international jury composed of important figures of the film industry, such as the former president of Walt Disney Studios Dick Cook, director of the British Independent Film Awards Johanna von Fischer, Master's Program Director of London Film School Nick Roddick and vice-president of Tribeca Film Institute's Artist Programs Ryan Harrington.

A total of 200 cities in the U.K, the U.S, France, Italy, Spain, the Netherlands, Denmark, Germany, Australia, Brazil, Canada, the Dominican Republic, El Salvador, Japan, Indonesia, Belgium, India, Lithuania, Malaysia, Portugal, the Republic of Congo, Romania, Sweden and Turkey will participate in the event. While the festival gives short filmmakers around the world a chance to screen their films to large crowds, it also adds art to the daily lives of metropolitan people. The festival, which will appeal to people from every age, will reach to millions of people from different nationalities and offer them unexpected, effortless and free of charge films.

Here is a selection of the festival program:

A hot summer's day. A woman witnesses a mysterious event. The moment of discovery is slowed down to its essence to capture all the details of her face as her expression changes from boredom to shock.

The film was made just by himself in his spare time, and it was an effort to bring more attention to the problem of lethal and destructive remains of war, in particular, landmines and anti-personnel mines. He has donated this video to one of the anti-mines organizations for free. According to him, as there is not enough information about this issue in the visual media, unfortunately this video received very little attention in the Internet. Now, he hopes many more people will be conscious about the problem; maybe some of them will donate or volunteer.

The short film BHUTAN is an authentic, personal film. It shows this mythical country the way Clemens experienced it over a period of eight days in late 2013. It combines these pictures with the real life situation of explaining an exotic trip to a person who's not actually there. The result is a short, intense film, right on the border between documentary and fiction.

Salazar has always believed that on every trip, a day or a moment in time stands out from the rest, that very instant of your life that turns into a mental postcard and is almost impossible to delete. But that instant is not necessarily related to how impressive a monument is, the architecture design of a palace, the legacy of a culture or the aesthetics of a city's landscape. It is rather the ability of its inhabitants to turn into characters, of a place to become a stage, and most importantly, when the spontaneity of everyday life transforms into personality, which makes each city different from the rest and which we sometimes find difficult to discover.

"Midyat, the name of a ballad as ancient as history...The hidden temple of Mesopotamia, whispering boundless inspiration through every stone you touch."

"Rediscover the Summer." The summer is not a season, but a spiritual state. Life as a huge illusion, in which everything is possible. Even to be a summer through the winter, because everything is like a film.

"The Adventures of Amanda" is an ongoing photography project presenting the director's travel adventures and discoveries with his girlfriend Amanda, always framed in the shot contemplating the scenery in many places and experiences around the world. This film is a compilation of what happened after one year of adventures across the globe.

"Discover step by step" is part of an installation of short films that build an unconstructed cinema. Each film is projected on suspended screens, which facilitates in creating frame-like structure across which the viewer can move forward. The idea is an experiment on transcendence and variability of the human being. One is in constant motion and change, and this motion is evidence of life. A permanent journey and alongside it, the unavoidable load, luggage and burden we all carry, featuring the luggage within two states - the physical and the metaphysical. You might be empty-handed, carrying no bag or purse, yet you carry so much.

Every journey of discovery begins with a single step. As we grow, we try new things, experience wonder, pain, trial and tribulation. This film examines at that journey, the walk through life, with each and every step.

To discover is a part of life and a key element of learning. We are exposed to a host of information every day and we discover new things. The aim of this film is to say that there is an endless, repetitive and inevitable continuity of discovery.

Paul has travelled around the world, and to him, Kathmandu remains the most enthralling, magical city he has discovered so far. For him, it is a visual and acoustic dream, all of your senses are lifted, and life flows like a river. If a poem were a city, it would be Kathmandu.