Rome gets ready for Turkish film festival in April 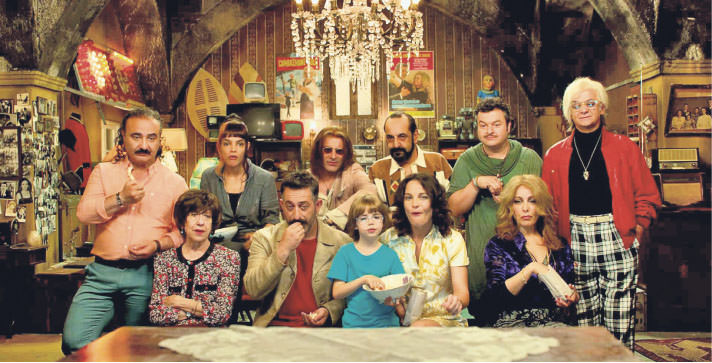 by daily sabah
Mar 24, 2015 12:00 am
Organized by SPR Istanbul since 2011, the Fourth Turkish Film Festival will run from April 15 to April 19 in Italy's capital city, Rome. The fourth year of the festival, which has screened many important Turkish films to Italian audiences for four years, will take place under the tutelage of Serap Engin. According to the world-renowned Turkish director Ferzan Özpetek, who is the honorary president of the festival, the event "has become an addiction for cinema lovers in Rome." Özpetek, who will launch a new book and a new film this year, also works for the annual festival.

Stating that this year's festival will feature films by many different directors, whom he knows personally and whose films he watches, Özpetek said, "It is nice to screen these films here within a festival. Each film will be screened twice during the festival. There is so much support for the festival. Many people I know watch one film and move on to another. I am proud to hear and see those things," he added.

The festival presents an honorary award to a veteran figure of cinema every year. The award, which has previously gone to Yavuz Turgul, Nuri Bilge Ceylan and Yılmaz Güney, will be presented to Hümeyra this year. "Hümeyra is an artist I love and have appreciated for many years. I admire her for her acting and singing performance, but especially for her humanity and approach to life," he said. He also drew attention to Hümeyra's success in every field of art. "She is very successful at everything she does. Right now, she paints and she is very good at it; she is good at everything. That is why she is one of the most important artists," he said.

The fourth edition of the festival will screen 12 Turkish films including "Unutursam Fısılda" (If I Forget, Whisper it to Me), "Neden Tarkovski Olamıyorum" (Why I cannot Be Tarkovski), "Bir Varmış Bir Yokmuş" (Once upon A Time), "Sesime Gel" (Come to My Voice), "Düğün Dernek" (Wedding), "Pek Yakında" (Coming Soon), "Dedemin İnsanları" (My Grandfather's People), "Bir Fincan Türk Kahvesi" (A cup of Turkish Coffee), "Nar Zamanı" (Pomegranate Time), "Dün Bugün Yarın" (Yesterday Today Tomorrow), "İrme" and "Bir Maç Günlüğü" (A Diary of A Match). The festival will kick off with director Çağan Irmak's latest film "Unutursam Fısılda" on April 16. The ceremony, which will take place at the famous Barberini cinema halls in Rome, will be hosted by Turkish actor Mehmet Günsür and Honoree president Özpetek will present the honor award to Hümeyra.
Last Update: Mar 24, 2015 1:44 am