Istanbul Modern screens war stories from around the world 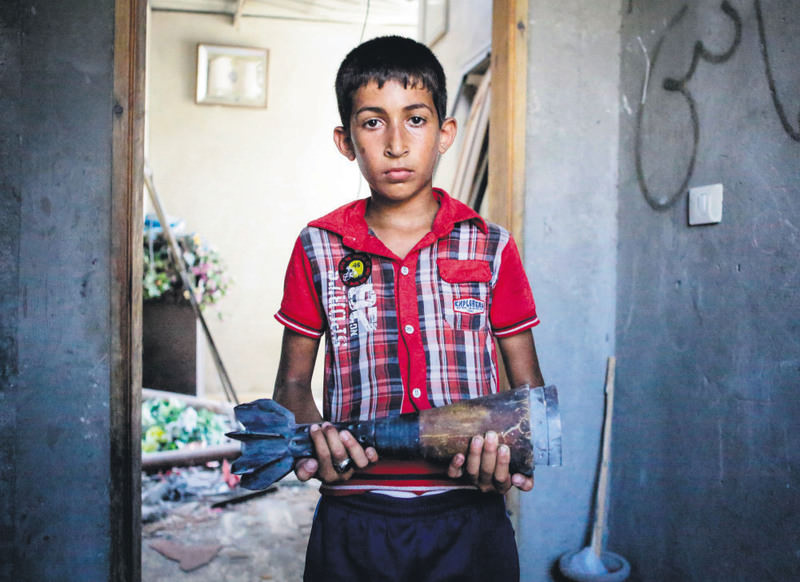 As part of the TRT Documentary Days between May 8 and May 10, Istanbul Modern Cinema will screen documentaries depicting stories of trauma, destruction and pain caused by war under the title of ‘War Panorama'

Istanbul Modern Cinema will present war-themed documentary films under the title of "War Panorama" from May 8-10 as part of TRT Documentary Days. Joshua Oppenheimer's "Act of Killing" and "The Look of Silence" as well as "Virunga," which was nominated for an Academy Award for Best Documentary will be among the films that study the trauma, social problems and deep wounds caused by war. The directors of the films will attend the screenings.

Asier and I grew up in the Basque region. One day, Asier disappeared and I found out that he joined Basque Country and Freedom (ETA). How can I explain the reasons that led Asier to make such a decision that I cannot even grasp?

"A World Not Ours" is an intimate portrait of three generations of exiles who live in the Ayn el-Hulve refugee camp located in southern Lebanon. Based on rich sources such as personal records, family archives and historical footage, the documentary is an illuminating study that investigates the terms belonging, friendship and family with a sensitive approach. Following a few generations of the same family over 20 years, the documentary is not just the story of a family, but an initiative to record things that have been forgotten and display the things that should be deleted from common recollection.

Chechnya has undergone a remarkable transformation in only a few years. Minefields and piles of debris have been replaced with wide boulevards, luxurious boutiques and skyscrapers. It is almost impossible to understand that the country experienced a war. Award-winning journalist Manon Loizeau spent the last 20 years observing the conflicts and war in Chechnya. Loizeau visited the places he knows best and shot secret videos and saw that there are women and men living in a terror greater than the one during the war behind the glittering mask of new Grozny. The documentary is a journey to the lands of negligence and terror.

Talal Derki's award winning documentary focuses on 19-year-old Syrian national football team goal keeper Abdul Basset who turns into a resister. Abdul and a group of his friends struggle to protect the captive people of Homs, Syria. However, Abdul and his friends have to take up arms when they encounter the violent reaction of government forces. The striking film follows this fearless group over two years and follows the transformation of Basset's beloved Homs into a deserted, unrecognizable and damaged city.

Joshua Oppenheimer turned his camera on victims in "The Look of Silence," which is somewhat of a sequel to "The Act of Killing." The director centers on Adi who learns that his brother is killed by Anwar and his friends through the previous film and his confrontation with the murderers of his brother. Oppenheimer also enables the audience to witness the shattered lives of Adi's family.

"Turkish Passport" is the story of diplomats working in Turkish Embassies or Consulates General in some European countries during World War II who saved the lives of countless Jews. Based on the testimonies of those who went to Istanbul to be safe during the war, the film sheds light on the period with written historical documents and images from archives. Turkish diplomats did not only save Turkish Jews, but also foreign Jews doomed to die by handing them Turkish passports.

UYGHURS, PRISONERS OF THE ABSURD, 2011, Canada

This documentary tells the story of the incredible journey of a group of Uyghurs, members of an oppressed minority in China, who are the victims of a war against Islamic terrorists. "Uyghurs, Prisoners of the Absurd" is fictionalized as an adventure film set amid the labyrinth of the contemporary geopolitical puzzle.

Located in the forests of eastern Congo, Virunga National Park is home to one of the largest bio-diversity in the world and to the last surviving mountain gorillas on the planet. Listed on UNESCO's World Heritage List, this wild yet enchanting place is protected by a small group of people, including a former child soldier, the care taker of the gorillas and park guards, against unauthorized hunters and criminals trying to get hold of the rich natural sources of the park. "Virunga" is a great mixture of

investigative journalism and nature documentary filming. It brings a group of courageous people who risk their lives for a better future in a forgotten place of Africa to light. The film focuses on the true story of the realities of life in Congo.

This documentary focuses on a day in the life of Yasemin who lost her father in Afghanistan due to the bombarding carried out by NATO and International Security Assistance Force (ISAF) planes. The documentary is a peek into Yasemin's life for a day.

Shot during the 2014 Gaza war in which 507 children died and 3,598 were in injured, "Born in Gaza" follows a group of small children who are growing up in a war zone. After Hamada, 13, says, "We were eight children on the beach. We were there to play football," the bombing begins.

"Act of Killing" tells the story of Anwar and his friends who are a gang that sells movie tickets on the black market in Indonesia. Over time, this small gang turns into an extremist, right-wing, paramilitary organization that is responsible for the killings of millions of people. While Anwar and his friends talk about the massacres like an ordinary thing throughout the film, they also animate the scenes from the old American films they love. The film is a distressing experience that reveals how the minds of mass murderers work; a nightmare that shows us evil with all its ordinariness.
Last Update: May 01, 2015 9:20 pm
RELATED TOPICS