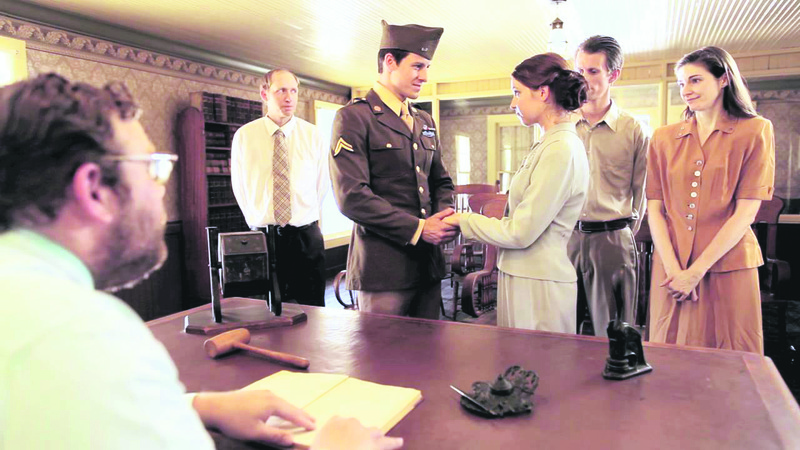 by May 18, 2015 12:00 am
An uncompromising look at the bottom end of France's tough job market won warm applause from critics at the Cannes Film Festival on Monday. "The Measure of a Man" follows a middle-aged father as he struggles to find work after losing his factory job, going through humiliating interviews and training programs before landing a security guard position he hates. "All over the world today, men are being transformed into the type of people they don't want to be, just to hold on to their job," director Stephane Brize told reporters after the screening. Unemployment in France has repeatedly hit record highs in recent months, with more than 3.5 million people out of work. "What's moving in the film is that it depicts people doing things they don't really want to do," the film's star Vincent Lindon said at the press conference. "It depicts people in very precarious situations."

In long, tortuous takes, the film subtly reveals the disgust of Lindon's character as he is forced to confront similarly struggling individuals who have stolen paltry items from the supermarket. The situation is degrading and brutal for the main character because the system is trying to make people indifferent," said screenwriter Olivier Gorce, who shadowed real security guards as part of his research. The film uses non-actors performing their real jobs, including a real-life banker and shop workers, lending it a stark documentary style. "I talked a lot with people in the unemployment agency and that's how we fleshed out the script. Everything is rooted in reality," added Gorce. It is the second gritty French drama to feature at Cannes, following the opening film "Standing Tall," which followed a juvenile delinquent's vicious circle of petty crime and family breakdown.

Lindon, who has been a staple of French cinema for years, said he believed films had a vital role to play in shaping political opinions. "I believe that the films that go down in the history of cinema are films that talk about contemporary society," he told reporters. "It's a very powerful medium. It might not change people's ideas but at least it encourages people to ask certain questions. As a spectator, you're gaining a political awareness." The film has garnered strong reviews so far, with trade magazine Variety calling it "a powerfully-affecting social drama" even if it is "far from ideal date-night viewing."
Last Update: May 18, 2015 11:10 pm
RELATED TOPICS