In his new film ‘The Lamb,' internationally renowned Turkish filmmaker and video artist Kutluğ Ataman takes us to an eastern Anatolian village. Ataman talked to Daily Sabah about the themes in ‘The Lamb' and his upcoming film project about Turkey's Feb. 28 military coup 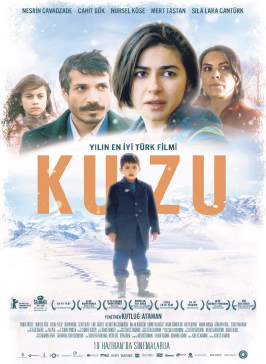 "The Lamb" ('Kuzu' in Turkish) takes place in an eastern Anatolian village. According to tradition, 27-year-old Medine has to serve oven-roast lamb at the circumcision feast of her little son Mert. Medine does her best to earn enough money to buy a sheep. Ismail, Medine's unemployed husband, is under a lot of stress.

One day in 2008, internationally renowned Turkish filmmaker and video artist Kutluğ Ataman received a strange piece of news. Ataman had applied to the film support fund established by the Culture Ministry in order to get backing for his new project. This feature-length film "The Lamb" ('Kuzu' in Turkish) was about a young boy's fear of being sacrificed by his father following his own circumcision ceremony. Ataman imagined shooting the film in Erzincan, his hometown. He thought it was a good project to pitch to the film committee. To his dismay, committee members refused his application saying the film's references to the practice of sacrifice was "orientalist." More interestingly, they accused Ataman of "speaking critically about his country in the foreign press."

There was certainly a political pattern here: committee members had also refused projects by Ezel Akay, who had just finished a film about the mid-14th-century Ottoman Empire, "Killing the Shadows," as well as turning down Derviş Zaim's project "The Dot," about Islamic calligraphy. A film that was engaged with Turkey's history and its issues of identity was automatically seen as suspect and labeled orientalist in the eyes of these bureaucrats.

Six years after the committee meeting, Ataman's film won the top prize at the International Antalya Golden Orange Film Festival, Turkey's leading film festival. "The Lamb" was shown at the Berlinale years after Ataman showed his masterpiece "Lola and Billy the Kid" there in 1999. Variety magazine's Jay Weissberg called Ataman's new film "amusing and visually pleasing." The Hollywood Reporter called it "a timeless story about human behavior, fears and desires."

"The Lamb" takes place in an eastern Anatolian village. According to tradition, 27-year-old Medine has to serve oven-roast lamb at the circumcision feast of her little son Mert. Medine does her best to earn enough money to buy a sheep. Ismail, Medine's unemployed husband, is under a lot of stress. Meanwhile Mert's elder sister Vicdan tells him that he will be slaughtered if they cannot find a sheep before the ceremony. "My mom always calls you 'my little lamb,' does she not?" she tells him. Finding a job in a slaughterhouse, Ismail starts seeing a singer-prostitute who comes to town.

I asked Ataman about how he came up with the story. How did he develop it from an idea to a film script? "It's always a very long process for me," Ataman said. "I write in quick and concentrated bursts of work with long periods of doing nothing in-between. I call these periods 'writing attacks.' I find this more productive than writing every day, which is a discipline that writers must have. It is different for me. The story of The Lamb came to my mind when I was walking aimlessly in Erzincan, my hometown. It was a very cold day and I was walking on one of my permafrosted family lands. The light was magical. There I suddenly had the image in my mind of Archangel Gabriel descending and giving me a ram. It all started from there."

Ataman found working in Erzincan a fascinating experience. "Erzincan is the country of very warm people in a very cold climate," he told me.

"I write in quick and concentrated bursts of work with long periods of doing nothing in-between. I call these periods 'writing attacks.' I find this more productive than writing every day, which is a discipline that writers must have," Ataman said.

"I don't think it is a big secret anymore that I am a complete fanatic of Erzincan... So it was a great pleasure to work there, despite the logistical difficulties one has to face when you are trying to make something as difficult as a movie."

I loved the tongue-in-cheek, subtle humor of Ataman's film and wondered about how he had managed to direct young actors, Mert Taştan and Sıra Lara Cantürk, while they read their extremely funny and understated lines in the script.

"You talk with them," Ataman explained, "You talk very simply about what you need to do and they get it. The common belief is that it is difficult to work with children. I find the opposite is true. I give them a lot of trust and respect and they give me the performance I need for my movie. Like every actor, you need to make sure that they know you trust them, and that they can trust you. Actors are fearful people. They are afraid to make mistakes. You need to watch them and lead them through the role. This is one of the most essential responsibilities of a director."

Feza Çaldıran's cinematography in "The Lamb" is impressive, offering a new aesthetics we have not seen in some of Ataman's earlier films like "2 Girls," which mostly took place indoors.

"To me Erzincan itself is one of the leading actors in this film," Ataman told me.

"Not many people realize even in Turkey that it is one of the most majestic regions of Turkey along with Dersim. The place is really one of the most beautiful places in Turkey and it is a complete secret. Feza is an amazing artist. What I love most about working with him is that I can trust him completely. He doesn't work with me. We work together. He is a real partner for me, always open to new ideas and challenges. I find that I learn a lot from him."

I asked Ataman whether he considered circumcision, which plays a central role in "The Lamb," to be a trauma for Turkish boys. "I think the idea of circumcision must be more scary than it actually is," Ataman replied.

"I was circumcised as soon as I was born so I don't remember it. Personally, I like being a circumcised man. I would not want to be uncircumcised. Some people may have problems with rituals, but I am completely taken by rituals. I think rituals are part of our culture, they are part of what makes us and make us belong to one another. I am always curious about new rituals of my own culture and I like to follow them. There is a certain comfort to be had in following rituals. One feels more secure and the sense of belonging is comforting. But having said this, I guess everyone should be allowed to make their own choices in the end. These are individual choices."

Alongside Taner Birsel, Güven Kıraç and Cahit Gök, Ataman worked with two superb actresses, Nesrin Cavadzade and Nursel Köse, whose hidden tension in the film adds such an interesting layer to the children's tale aspect of "The Lamb". I wondered whether Ataman developed their rivalry after finishing the original story. Or was it always part of the narrative? " 'The Lamb' is probably my first film about men," Ataman explained. "All my previous films had women in their centers. There are strong women characters in it, but the story is about them making these men, shaping them and reshaping them."

"People ask me who the lamb is. The obvious answer is that it is Mert, the little boy in the story. But for me the real lamb is İsmail, the father. This is why I chose to call him İsmail and not İbrahim. Nesrin is a wonderful actress. She is more of an intellectual, always very analytical about her part. I find Nursel to be more of a natural actress. They needed to be directed in different ways. With Nesrin, one has to do a lot of initial work but then let go. As for Nursel, she is like a wild, raw, acting force. You have to hold the reigns at all times and use and direct that amazing energy she naturally possesses."

In an earlier interview Ataman had told me about his intention to focus his energies on cinema and distance himself from the contemporary art world. I asked him whether we could expect to see new films in the near future. "One thing I realized during the Gezi events is that the younger generations in Turkey don't know anything about the past coups, how everyone suffered and how miraculously we were all saved from those very dark and oppressive periods," Ataman said.

"Our family friends were executed during the 1960s. First the prime minister and then some ministers were assassinated by military courts. My relatives, one of whom is Professor Büşra Ersanlı, and her sister, went to jail in the 1970s. I was tortured and had to escape the country in the 1980s when it was my turn to go to prison. Then, when I came back to Turkey in late 1990s, I found myself in the middle of the February 28 coup. My entire life was consumed by these fascist events."

"So yes, I think it is about time to talk about this," Ataman said. "I feel ready to make a film about February 28. This will be a very personal story based on real events."

"There have been huge improvements in the intervening years," Ataman told me when I reminded him of the film committee's 2008 decision about "The Lamb," a film that has already proved itself internationally.

"Unfortunately we still like to think ideologically," Ataman added. "As I am getting older I find myself to be less concerned with ideology and more about what it means to be a human being in this magical planet and in my country, which I love more than anything."
Last Update: Jun 20, 2015 6:39 pm
RELATED TOPICS