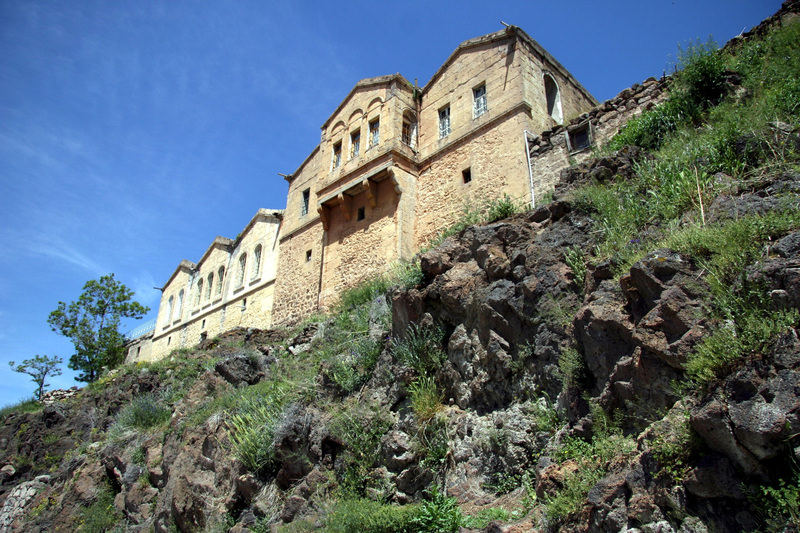 The city of Aksaray, which is a gateway to famous Cappadocia and has a history of 10,000 years, has become one of the most preferred cities for filming movies, TV series and programs for producers and directors, since it has diverse locations all in one place.

Emphasizing that producers and directors have been in search of natural locations for shooting films and TV series recently, the head of Culture and Tourism in Aksaray, Mustafa Doğan told Anadolu Agency (AA) that Cappadocia came forward because of its special places and that Aksaray became prominent in Cappadocia because of its authentic locations.

"Aksaray is a special city in Cappadocia because of its historical places and natural beauty. The Ihlara Valley, which is one of the largest canyons in the world, is a favorite place because of its historical artifacts and nature. Additionally, Sofular Valley, Kızılkaya, Demirci, Yüksek Kilise Church and Mamasın Dam are among other favorite locations. Producers coming to these places can get the shots they want without much intervention in nature and the historical places of Aksaray," Doğan said.

Explaining that Aksaray has hosted many movies, TV series and TV programs recently, Doğan said: "We gave permission to more than 20 applications in the first six months of this year. We saw that movies, TV series, documentaries and especially TV programs to promote the city were among the applicants. The Ihlara Film Festival held last year also made a significant contribution to the increase in the amount of filming in the region."

Doğan said that six movies - "Patron Mutlu Son İstiyor" (The Boss Wants a Happy Ending), "Buğday" (Wheat), "Aşkın Sırrı: Somuncu Baba" (The Secret of Love: Somuncu Baba), "Kapadokya'da Aşk Başkadır" (Love is Unique in Cappadocia), "Helak: Kayıp Köy" (Exhaustion: Lost Village) and "Yitik Kuşlar" (Missing Birds) - have all been shot in the city since 2014. Also, the shooting of a Hollywood film named "The Mountains and the Stones" is continuing in the city. "All these indicate that Aksaray has turned into a city that is been preferred by producers and directors recently, and we think this is a good means of promotion. We contribute to the promotion of our city by helping producers coming to Aksaray," Doğan said.

Kürşat Kizbaz, director of "Aşkın Sırrı: Somuncu Baba," said that all the shooting of the movie, which will open in theaters this year, was done in Aksaray. Emphasizing that Aksaray is a precious city in Anatolia that has managed to survive to the present day by protecting its historical and cultural values to a large extent, Kizbaz said: "The city is like an open-air film plateau with invaluable places remaining from the Seljuks and Ottomans. Within this context, Aksaray, the gateway to Cappadocia, was an appropriate place for our film. We had the chance to tell a story from the 13th century until the present day thanks to the locations in Aksaray such as Sultanhanı, Ağzıkarahan, Zinciriye Madrasa and the Red Church."
RELATED TOPICS