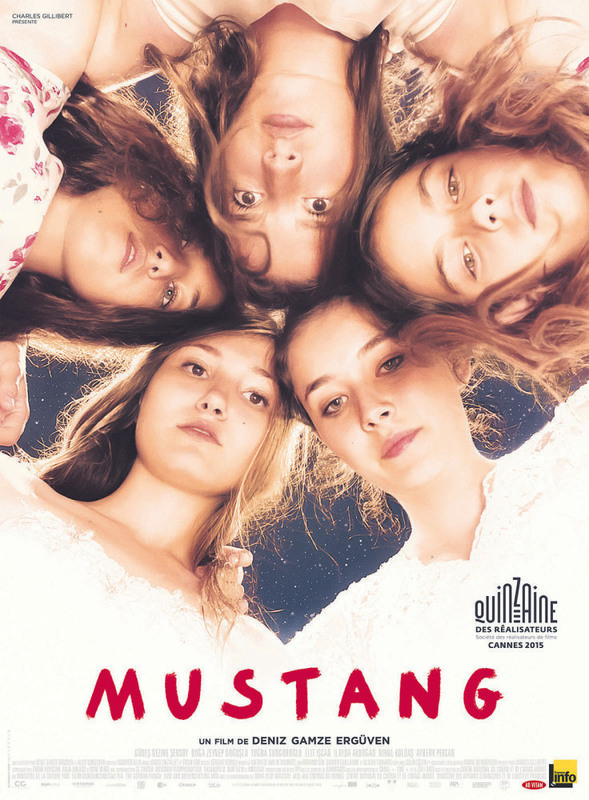 by Daily Sabah with Wires Sep 28, 2015 12:00 am
The film "Mustang" by Turkish-French director Deniz Gamze Ergüven was selected by France's national center for cinema last week to compete for best foreign language film at the 2016 Oscars scheduled to take place on Feb. 28 in Los Angeles. Centered on the story of five adolescent sisters who are sequestered by their family when they are deemed too rebellious, the film was screened at the Director's Fortnight at the 2015 Cannes Film Festival and has received international critical acclaim.

Set in a northern village in Turkey where Lale, the leading actress, and her four sisters live, Mustang depicts how a conservative society restricts the life of orphaned sisters as they must resort to focusing on homemaking rather than education. The five sisters, who share a common passion for freedom, find ways of getting around the constraints imposed on them. "We're more than happy! It's a choice both extremely strong, radical and modern that takes into account a new generation of filmmakers," 37-year-old Ergüven told AFP. "The fact that France selected this film for the Oscar's race is a strong symbol of the defense of free speech," she said. Speaking to French daily Le Figaro, Mustang's producer Charles Gillibert said the movie could win an Academy Award. He said Ergüven's film gives a nod to the fundamental values upheld by France, such as the right to education, women's rights and freedom.

The committee selected Mustang from a pool of five candidates including Jacques Audiard'ın "Dheepan," Catherine Corsini's "La Belle Saison," Xavier Giannoli's "Marguerite" and Stephane Brize's "La Loi du marche." The film previously won the Heart of Sarajevo Award for best feature film at the Sarajevo Film Festival, a marquee movie event in Eastern Europe which was held from Aug. 12-20 this year. In the festival, the award was shared by Mustang's lead actresses - Güneş Şensoy, Doğa Doğuşlu, Tuğba Sunguroğlu, Elit İşcan, and İlayda Akdoğan. Ergüven's film was also nominated for this year's European Discovery - Prix FIPRESCI, an award presented annually as part of the European Film Awards to a young and upcoming director for a first full-length feature film. Born in Ankara, Ergüven studied literature and African history in Johannesburg and directing at La Femis in Paris.
RELATED TOPICS