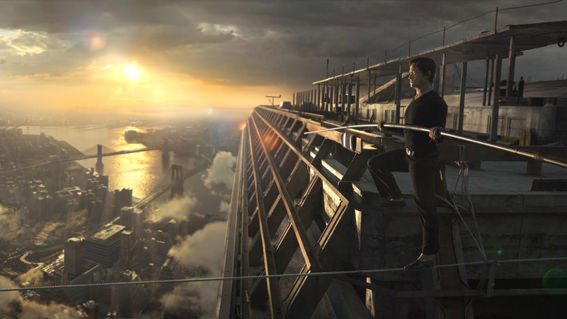 by reuters
Oct 08, 2015 12:00 am
Heights don't scare Joseph Gordon-Levitt, which came in handy when the actor was tasked with recreating Frenchman Philippe Petit's audacious 1974 high-wire walk between the roofs of New York's Twin Towers in the movie "The Walk." The former "3rd Rock from the Sun" child star, now 34, talked with Reuters about training for the movie and the unexpected similarities between walking a wire and acting. "The Walk" opens across U.S. theaters on Friday. Below are excerpts.

Q: You already spoke some French and had done gymnastics as a kid. In the film, you not only walk a high wire, you also juggle and ride a unicycle. What was the training like?

A: Philippe (Petit) insisted that he be the one to teach me to walk on the wire first. Not every one who is good at doing something is always good at teaching it but he turned out to be an excellent teacher. He convinced me that I was able to do it and once I believed that I could, then I did. The training was several months. I love a challenge. I love trying to do something that is hard, it makes it fulfilling to me.

I found there is quite a bit of overlap between the mental game of walking on the wire and acting. When you are walking on a wire you can't be thinking 'Whoa, it's really quite high, I might fall.' You have to just fix your eyes on where the wire ends and clear your mind of everything else.

"There is a similarity with acting. When you are shooting a scene and the cameras are rolling, you can't be thinking of what people will think of the movie. You have to clear your mind of all that stuff and just be present.

The movie also seems like a love letter to New York's Twin Towers.

A: When any of us see images of the World Trade Center towers, our minds go immediately to the tragedy. I was in New York City on 9/11 and I remember it really well. But with any tragic loss, it's also good to remember the positive things, the beautiful memories that you have. It's like grieving over a lost loved one. You don't want to focus only on the death, you want to celebrate their life and that is what we wanted to do with this movie and the Twin Towers.