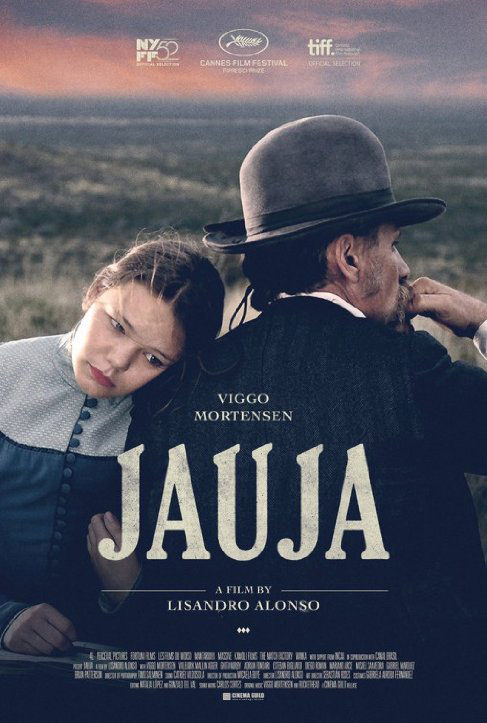 The internationally co-produced historical drama film "Jauja" is directed by Lisandro Alonso. Set in the 1880s, Gunnar Dinesen, who immigrated to Argentina from Denmark with his teenage daughter, tries to adapt to his new country while working in the deserts of Patagonia. One day Lieutenant Pittaluga asks Dinesen to take his daughter, Inge, to a dance. He refuses this proposition as Pittaluga is notorious for being interested in young girls. Soon after, Inge disappears and Dinesen wanders around the endless deserts to find his little girl. Starring Viggo Mortensen, Ghita Norby, Adrien Fondari , Brian Patterson and Esteban Bigliardi, the film competed in the Un Certain Regard section at the 2014 Cannes Film Festival where it won the FIPRESCI Prize.

Written and directed by Erhan Güleryüz, the vocalist of Turkish music band Ayna, the Turkish production "İçimde Akan Nehir" focuses on Hazar Kafkas who questions the meaning of his life after being forced to return to his hometown because of health and financial problems. He ultimately gets his hands on a considerable amount of money following the sale of his father's house. Afterwards, he is faced with a choice to either ensure his son's future or save the life of his lover's little girl who is about to die.

Our oldest friend returns to the silver screen. The American production "The Peanut Movie" brings the adventures of Snoopy to the screen. Snoopy embarks upon his greatest mission as he and his team take to the skies to pursue their arch-nemesis, while his best pal Charlie Brown begins his own epic quest back home. Directed by Steve Martino and based on the comic book stories of Charles Schulz, the animated film is dubbed by Noah Schnapp, Bill Melendez and Hadley Belle Miller.

Starring Anna Lise Phillips, Jack Campbell, Katie Moore and Kieran Thomas McNamara, the thriller was written by Evan Randall Green and directed by Nick Robertson. A family managing a farm struggles with ferocious and strong dogs. After a series of frightening and bloody encounters they are forced into survival mode to make it through the night.

Written and directed by Turkish comedian, actor, scriptwriter and director Cem Yılmaz, "Ali Baba and Yedi Cüceler" stars Çetin Altay, Irina Ivkina, Zafer Algöz and Yılmaz. Şenay and İlber are two unsuccessful businessmen who believe that their luck will turn following a trip abroad. However, they run into a bad crowd at gardening fair they attend and find themselves in the middle of chaos.