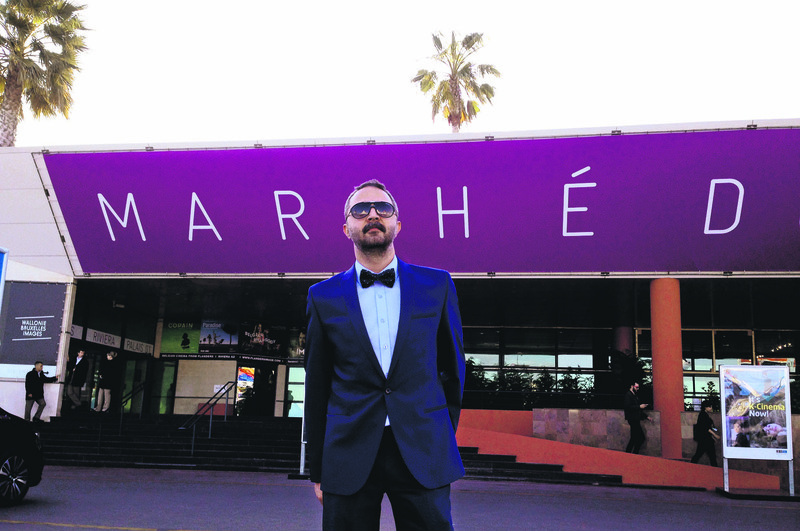 Cem Altınsaray, the Turkey director of the online film streaming platform MUBI, talks to Daily Sabah about how we watch films now

When American director Paul Thomas Anderson's latest film "Junun" was released on Novç 13th this year, there was great excitement among cinephiles and film critics on both sides of the Atlantic. This was not surprising, given Anderson's status as one of America's master filmmakers. His fascinating filmography, which includes such works as "There Will Be Blood," "Boogie Nights," "Magnolia" and "The Master," moves in a new direction with Junun which heralds Anderson's entry to the world of non-fiction filmmaking. For Junun Anderson collaborated with Radiohead guitarist Jonny Greenwood who had spent the first months of 2015 in India, working with Israeli composer Shye Ben Tzur and the Indian band The Rajasthan Express. Consisting of 19 Indian musicians, the band has fascinated both Greenwood and Anderson. The result is an album and film, both titled Junun.

Readers can listen to Greenwood's album on the digital music platform Spotify while Anderson's film has been streaming on the online film platform MUBI during the past two weeks. When Cem Altınsaray, the Turkey director of the online film streaming platform MUBI (www.mubi.com), announced a special screening event of Junun at Soho House Istanbul last month, there critics were excited to have the chance to watch Anderson's film the same week with their New Yorker and Londoner colleagues did. Long gone are days when audiences here spend months reading about films they have to wait to watch half a year after its premiere.

"We have so much respect for Paul Thomas Anderson," Altınsaray told Daily Sabah last week. "He is a true auteur and happens to be a MUBI member for a long time!" Altınsaray and his MUBI team had no idea about this until Efe Çakarel, the founder and CEO of MUBI, received an email from Anderson. "That is how everything began," Altınsaray said. "Shortly after, we secured the exclusive digital rights of Junun for a 30-day run. Now we are proud of completing the global premiere of this beautiful documentary, an intimate and vibrant musical journey. It surely helped us get more subscribers and more attention. It improved the perception of MUBI in numerous aspects. The founding vision of MUBI was to build a place where a director such as Paul Thomas Anderson could premiere a unique film like Junun. To be here today is not only an honor and a significant milestone but a realization of everything we dreamed of in the beginning our founder said. And we all are on the same page with him."

Established in 2012, MUBI Turkey bills itself as "the ultimate destination for watching the world's best films." It offers an alternative to more mainstream streaming services like Netflix, Hulu and Amazon. Instead of featuring a vast collection of films, MUBI offers a curated service, streaming 30 films at a time, for TL 10.99 ($4) monthly subscription. Every day a new film replaces an old one; you have to devote your time to the service's offerings. "The selection comes with forgotten classics, cult masterpieces, independent and award winning films from around the world," Altınsaray explained. "Since we feel the lack of a cinematheque for so many years and we usually depend on film festivals for real gems, MUBI is like a gold mine for Turkey's film lovers. It is growing rapidly and getting more appreciation day in and day out."

I know Altınsaray as one of Turkey's leading cinephiles. On Twitter he has started the hashtag #hergunbirfilm which he used to add to his daily film recommendations. When #hergunbirfilm went viral, Altınsaray moved the concept to an app. HerGünBirFilm, available at Apple's AppStore, became a hip recommendation tool for young and experienced film lovers alike. So how did he get involved in the MUBI project? "Five years after the initial foundation of the brand, I bought a big-screen SONY Bravia television," Altınsaray said. "It came with an embedded MUBI app and a free trial. That's how I experienced the service for the first time. I instantly loved it. I have heard quite a lot about MUBI even prior to this, mainly through stories about America's greatest living director's connection to the service. Martin Scorsese is a great cinephile himself thanks to which he become a member and a huge supporter of MUBI from the beginning. Upon going through the MUBI experience once, one can easily see why."

You don't need to be an expert to guess how the growing army of Turkish websites illegally streaming mainstream and arthouse films must be a huge problem for sites like MUBI. I wondered how they dealt with this. "Unfortunately, Turkey is one of the leading countries when it comes to online piracy," Altınsaray said. "There are hundreds of free films streaming sites. These sites are hosting their services from foreign domains. There is no way to cope with them in the long run. The thing is MUBI is curated and they are not. MUBI brings such special films that they could never imagine to show. Anyone with a passion for cinema would reward herself with a service like MUBI instead of searching for what to watch and how to do it for endless hours."

MUBI subscribers vary from college students to retirees, mostly attracting people who have a special interest for great films, Altınsaray told me. "There's not a single day they don't interact with us; they reach us in every possible way. They share a variety of opinions about the service. They make requests for a certain retrospective or a film to be programmed. They are never hesitant about asking questions or criticizing technical and support issues. We count ourselves lucky for all the feedback we receive from our subscribers."

As a cinephile can he foresee a future where we throw away all of our Blu-ray discs and DVDs, and watch art house films solely on the web? "Maybe those mediums will remain just like vinyl records of the past to a certain extent," Altınsaray said. "And yes, online streaming will be the foremost way of watching films. This is inevitable. Then again I always say that physically possessing films is of no significance, but watching the films as much as you can and capturing them spiritually is far more precious."