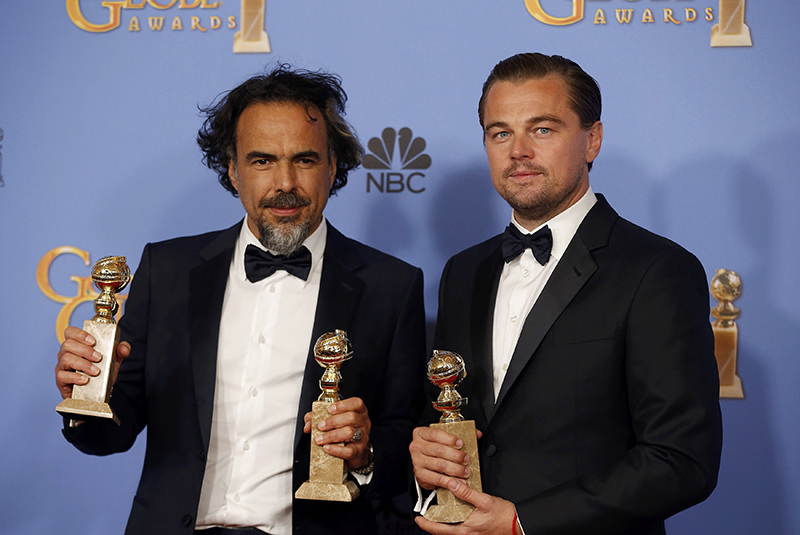 Director Alejandro Gonzalez Inarritu poses with the awards for Best Director and Best Motion Picture - Drama for ,The Revenant, (L) and actor Leonardo DiCaprio poses with the award for Best Performance by an Actor (Reuters Photo)
by Compiled from Wire Services Jan 11, 2016 12:00 am
A man alone in a hostile environment. A struggle to survive. Both of the top winners in film categories at Sunday's Golden Globes featured dramatic battles against the odds - but one was billed as a comedy.

Unlike the better-known Oscars, the Golden Globes split the top awards into two categories: drama, and comedy or musical.

That he Martian was billed as a comedy was a source of some mirth for host Ricky Gervais, whose irreverent opening monologue suggested that the film's nominations in that category were its only chance at a prize.

But The Martian had the last laugh, taking home two prizes, becoming one of the top winners in a night in which few nominees cleaned up.

Carol, the 1950s-era same-sex romance that had led with nominations in five categories, and The Big Short, the financial caper that had four nominations, went home with none from a Golden Globes that tended toward the serious.

Jennifer Lawrence won best actress in a musical or comedy for the family business epic Joy, and Brie Larson won for her portrayal of a kidnapped mother escaping captivity with her young son in the drama Room.

Sylvester Stallone won the best supporting actor Globe for Creed, the latest in his series of boxing dramas centering on his fictional alter ego Rocky Balboa. The award came 39 years after he was nominated as best actor for the first Rocky movie in 1977.

Accepting the award on stage in Beverly Hills, Stallone thanked his "imaginary friend" Rocky, calling him "the best friend I ever had."

British actress Kate Winslet won the best supporting actress award for her role in the biopic Steve Jobs, which also took the prize for best screenplay.

The 25 film and television awards given by the Hollywood Foreign Press Association (HFPA) have in recent years shed their reputation as a fluff-fest and increasingly been seen as an early signpost to the Academy Awards, held in February.

In recent years, many winners of the Globes' best drama and best lead acting film awards have gone on to win equivalent awards at the Oscars.

Hungarian Holocaust drama Son of Saul won the best foreign film Globe, beating out Mustang from France, The Club from Chile, The Brand New Testament from Belgium, France and Luxembourg, and The Fencer from Finland, Germany and Estonia.

"I wanted to be an actress before I wanted to be a singer, but music worked out first," the multi-platinum selling pop star said, accepting the award.

The Bad Romance singer, whose real name is Stefani Germanotta, beat out a roster of established actresses for the award, including Felicity Huffman, Kirsten Dunst, Sarah Hay and Queen Latifah - who made her own crossover from music to acting decades ago.

Also among the TV winners were Empire's Taraji P Henson, Mad Men's Jon Hamm and Star Wars actor Oscar Isaac, who took the prize for best lead actor in a movie or limited TV series for HBO's Show Me A Hero.

The awards dinner at the Beverly Hilton hotel has a reputation as a no-holds-barred party where Hollywood's A-list lets it all hang out.

Gervais kicked off the ceremony with a monologue he warned would be so scathing that he would have to go into hiding afterward.

"Not even Sean Penn will find me," he said, in a crack at Saturday's revelation that the 55-year-old actor met secretly late last year in Mexico with fugitive drug kingpin Joaquin "El Chapo" Guzman.

Gervais went on to skewer everyone and everything from Jennifer Lawrence's protest over equal pay for women in Hollywood to the Golden Globes themselves.

Addressing the night's coming winners, he said "that award is - no offence - worthless," joking "that some confused old journalists wanted to give you [a Golden Globe] so they could meet you in person and take a selfie with you."

Best Supporting Actress in a Series, Mini-Series or Motion Picture Made for Television

Best Supporting Actor in a Series, Mini-Series or Motion Picture Made for Television

Oscar Isaac, Show Me a Hero

Best Television Limited Series or Motion Picture Made for Television

Best Actress in a Television Series, Comedy or Musical

Best Actor in a Television Series, Comedy or Musical

Mozart in the Jungle

"Writings On the Wall," Spectre

Best Actor in a Motion Picture, Musical or Comedy
Matt Damon, The Martian