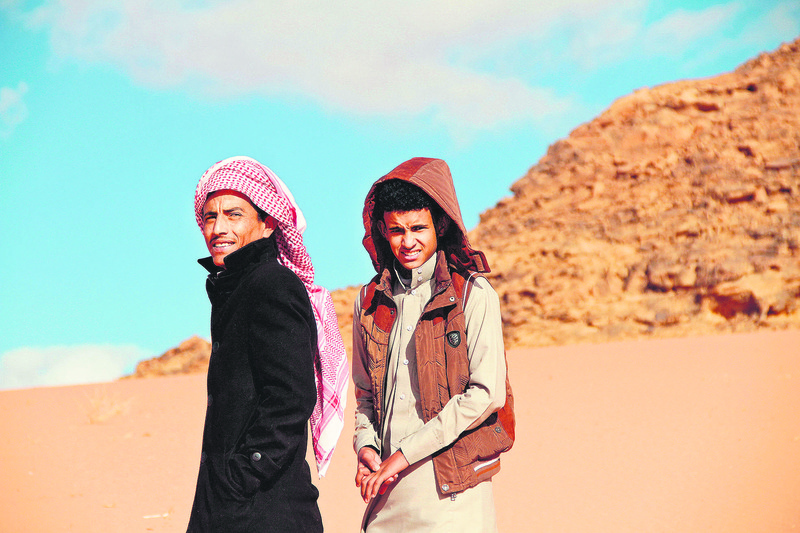 by Associated Press
Jan 13, 2016 12:00 am
A coming-of-age drama set among Bedouin tribesmen roaming the desert emerged as the first potential Oscar contender produced by Jordan's nascent film industry. "Theeb" (Wolf), set in 1916, tells the story of a playful 11-year-old Bedouin boy of the same name who gets caught up in his tribe's alliance with the British against Ottoman rulers during the era's Arab Revolt.

Billed as a "Bedouin Western" and an authentic portrayal of Bedouin culture, Theeb is one of nine movies short-listed for best foreign language film nominations. The final five will be announced Thursday.

For the amateur cast from a Bedouin clan and for two young Jordanians writing and directing their first feature film, making Theeb has already been a wild ride, climaxing in the 2014 world premiere at the Venice Film Festival. That marked the first time the actors left Jordan or saw the entire film.

"They got a 10-minute standing ovation," said director Naji Abu Nowar, who won for best director in the "Orrizonti" (Horizons) category in Venice.

"The Bedouins, it's a very macho culture, and you never see anyone cry, even the children ... and to see tears coming out of some of their eyes (during the premiere) was a really powerful moment," he said, speaking from the Palm Springs International Film Festival, a last pre-Oscar opportunity to promote foreign films.

The actors have since resumed their lives in al-Shakriyeh, a small Bedouin village nestled among striking rock formations rising from the desert floor of Wadi Rum, a protected landscape just north of the Red Sea and one of Jordan's main tourist attractions.

Jacir Eid Al-Hwietat, who played Theeb, is now 15, attends 10th grade and has revised his career plans, from police officer to actor. "I'm a celebrity among my friends now," said Jacir, who has morphed from a boy with a sweet smile into a guarded teen. His cousin, Hussein Salameh al-Sweilhiyeen, who played Theeb's brother Hussein, is back to racing camels and working as a tourist guide. Since Theeb, he has appeared in a German TV documentary about Wadi Rum and a Jordanian tourism commercial, and said he would like to do more acting.

Al-Sweilhiyeen said being involved in Theeb made him aware of the need to protect traditions. Bedouin lifestyles in the area have changed dramatically in the last few decades, with nomads settling down, trading their camels for pickup trucks and living off tourists instead of goat herds. "Sometimes I say the old life was better," said al-Sweilhiyeen, sitting on the floor of the carpeted family diwan, or traditional reception area for guests. "The desert teaches you how to depend on yourself. Now we have good services, but we need to protect some old customs."

Jacir's father, 42-year-old Eid, still remembers the old ways; he was born in a tent and as a boy rode camels over long distances as his family wandered the desert before settling down about 30 years ago. He dropped out of school as a 15-year-old, taught himself English, began guiding tourists and recently sold his last camels, saying he doesn't have the time and space to care for them properly.

Al-Hwietat became the local point man for the filmmakers, Abu Nowar and Bassel Ghandour, who produced the film and co-wrote the script. The pair lived in al-Shakriyeh for most of 2012, soaking up Bedouin culture, rewriting the script and holding acting workshops for the local cast. Theeb was filmed over five weeks by veteran Austrian cinematographer Wolfgang Thaler, the most experienced crew member and praised by all involved as the bedrock of the production.

Ghandour said Thaler used super-16mm film in part because it gave greater depth to the stunning desert vistas than digital images. Theeb, also released commercially, was "definitely low-budget," Ghandour said, but wouldn't reveal how much it cost to make. Half a century before Theeb, scenes of the Oscar-winning epic "Lawrence of Arabia" about maverick British army officer T. E. Lawrence were filmed in Wadi Rum, just minutes from where Jacir and his family live.

Jacir's grandfather was part of the local support staff for "Lawrence," also set during the Arab Revolt, and the tradition continues. Jacir's father, Eid, has worked on international productions, most recently as a location manager for "The Martian," a 2015 science fiction film starring Matt Damon, which just won a Golden Globe Award for Best Musical or Comedy Motion Picture. Damon was unpretentious during the shoot, greeting everyone at the start of each day, said al-Hwietat.

At a time of growing conflict in the region, urban centers in Jordan, seen as relatively safe, are standing in for Baghdad or Beirut, he said, adding that "we have also become the go-to location for Mars and the moon." Meanwhile, the success of Theeb signals the development of domestic film production.

Over the past decade, the commission has offered workshops on all aspects of film-making, including an annual screenwriters' lab in consultation with the Sundance Institute. It also helped promote 25 feature films and documentaries made in Jordan between 2010 and 2015. However, budget cuts have forced the closure of a film school and the commission had to reduce training. "If we, as an industry, tackle the funding issue, I think we will be seeing more Theebs," said David. "Whether it wins or not, we are already very proud of what it has already achieved."

Back in al-Shakriyeh, the Theeb cast members play it cool, despite what appears to be a mild case of Oscar fever. If Theeb is nominated, four of them plan to travel to the awards ceremony in Hollywood Jacir, his father Eid, cousin Hussein and the film's villain, played by local resident Hassan Mutlaq al-Maraiyeh.

Like others in the film industry, they have already thought about what to wear for the big night black robes, the Bedouin version of formal attire, instead of the beige ones for every day, said Jacir's father.