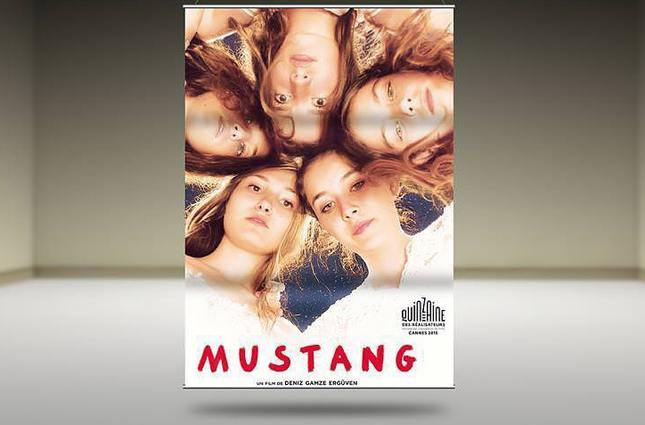 The French-produced coming-of-age drama will compete with "Embrace of the Serpent" from Colombia," Son of Saul" from Hungary, "Theeb" from Jordan and "A War" from Denmark at the 88th Academy Awards.

The short film "Mustang" is about the struggle of women trying to win basic human rights in a patriarchal society.

The film is set in a northern village in Turkey where Lale (leading actress) and her four sisters live. One day they start playing innocently with some boys, but the patriarchal society they live in constrains them, as they are soon forced to focus on homemaking instead of school. The arranged marriages become too much for the five girls burning for freedom and independence.

The motion picture premiered at the 2015 Cannes Film Festival Directors' Fortnight section has been selected as the winner of the Europe Cinemas Label Award, 2015 Lux Film Prize and the Heart of Sarajevo for Best Feature Film award.

The 37-year-old female director's work was France's official submission to the Oscars.

Meanwhile, The Revenant topped all films with 12 nominations, including best picture.

The gritty frontier epic also earned nominations for its director, Alejandro Gonzalez Inarritu, and actor Leonardo DiCaprio's performance, among others.

Six other films are in competition for best picture prize: Spotlight; The Big Short; The Martian; Brooklyn; Bridge of Spies and Room.

The Martian scooped seven nominations, while Spotlight, Bridge of Spies and Carol received six nods each.

One of the highlights of the nominations is Sylvester Stallone, who was picked for best supporting actor for his classic role of Rocky Balboa in the sports drama Creed. The no-name boxer who overcame all obstacles to become a champion became a part of the American cultural lexicon.

Awards will be presented Feb. 28 at the Dolby Theatre in Hollywood and televised live in more than 225 countries and territories worldwide.


Nominees in some other fan favorite categories include:

Best animated film: Anomalisa; Boy and the World; Inside Out; Shaun the Sheep Movie; When Marnie Was There